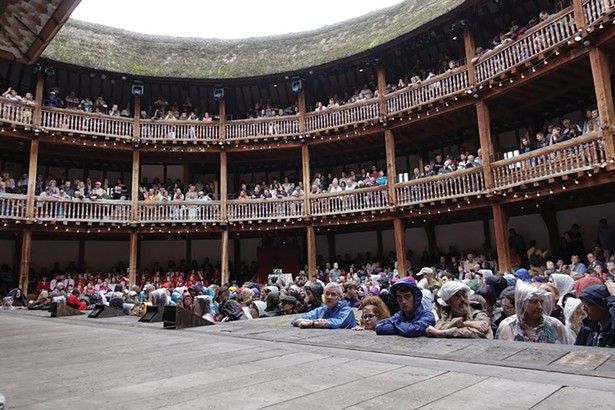 A group of teens were racing across Great Britain by train, being amused by a spirited rendition of Shakespeare's "As You Like It" using gummy bear actors on a tray-table stage. At the scene where the characters leave court for the Forest of Arden, Lesley Sawhill stopped her retelling. Sawhill is the artistic director of New Genesis Productions (NGP)—the youth theater organization based in Shokan, which was spearheading this 10-day Shakespeare and theater tour in England for 26 adults and teens from the Hudson Valley and New York City. Sawhill gazed out the train window. "We were literally in the Forest of Arden, with sheep grazing in the field and everything," she laughed. "Now we all have a clearer idea of that setting."

NGP works with kids ages 7-17 to study and perform Shakespeare's work in full, adapted, or sequenced monologue productions. Working with a UK school tour company to arrange accommodation, travel, and booking logistics, NGP gathered some of their committed students and brought them to acting workshops in Stratford-upon-Avon, and at the Globe Theater and the Central School for Speech and Drama in London. They saw six plays, went sight-seeing, and bunked together in hotels and hostels. Conversation at meal times became consumed with the students' analyses of theater staging and text treatment. When they came back, they had become the Shakespeare Squad, a nickname the teens gave themselves.

Not your average course of study and not your average vacation, non-credit study abroad programs, like NGP's, feed a sense of curiosity—about a specific interest and about the world. "It gave them a richer understanding and appreciation of Shakespeare and the content, and taking themselves more seriously in the work they do," Sawhill says. As she explains, Shakespeare always comes back to the human reality; it transcends all time and connects to the emotions, sometimes through complex situations that the characters experience. "As actors, the language presents opportunities to play with those emotions and fill them out in an almost larger-than-life kind of way," Sawhill says. "It gives teens confidence in their own voice and in the world."

Says 15-year-old NGP student, Georgia Dedolph, "It has always been my dream to go to London and study at the Globe."

The majority of study-abroad programs in the US, though, happen at colleges and universities. At SUNY New Paltz's Center for International Programs, about 500 students study abroad each year, including some from other SUNY campuses and other American universities. There are 70 programs in 20 countries, and students spend a semester, a year, or a winter or summer break on faculty-led trips or international internships and programs. Established in 1998, the center helped SUNY New Paltz to be recognized in 2015 with the Institute of International Education (IIE) Heiskell Award, for their innovative efforts in providing underrepresented students study-abroad opportunities.


The New Paltz website profiles Jeremy Acevedo, who studied abroad in 2012 at Charles University in Prague, Czech Republic. "Students who engage in global learning opportunities tend to find that their interest goes beyond study-abroad opportunities to include internships, cultural immersion, fluency in a foreign language, and graduate and/or work opportunities overseas," says Samantha Skillman, the center's marketing coordinator.

When Acevedo was awarded a Fulbright scholarship in order to return to the Czech Republic to work and study at a medical school in the city of Pilsen, he told the center, "Demographically, the odds were not in my favor to study abroad, but thanks to the Gilman [a scholarship funded by the Department of State] and Fulbright Scholarships, I have been able to establish these lasting global connections."

In preparation for the IIE's centennial celebration in 2019, it launched an initiative in 2014 called Generation Study Abroad. The baseline for the initiative was data from the Open Doors 2013 Report, which found that less than 10 percent of the 2.6 million students graduating with associate and baccalaureate degrees study abroad. The initiative gathered over 700 partners committed to mobilizing resources in order to double the number of US students participating in credit and noncredit programs abroad by 2020. Having, for almost 100 years, led the effort to expand opportunities for Americans to study in foreign countries, IIE invested $2 million into the initiative, including developing the Fulbright Program on behalf of the US government, which Acevedo benefitted from. On its website, IIE explains, "We believe that peace and prosperity in the 21st century depend on increasing the capacity of people to think and work on a global and intercultural basis."

One of the schools that has gotten on board in partnering with Generation Study Abroad is Mount St. Mary College in Newburgh. A few years ago, it started to offer a couple programs with destinations in England, Italy, and New Zealand. The programs are proposed by professors who want to share research interests and engage students. Last summer, students went to Spain to focus on language and literature. During the winter break, students went to three different cities in Australia, the first time Mount students ventured there. Of the roughly 2,000 students at the Mount, about 60 participate in the faculty-led study-abroad programs. The Mount's Study Abroad Advisor, Ingrid Morales, says that those programs are popular because of the structure that they offer. "Our school is a small campus, and students like that. Some of them want to go to a new country, but continue to have the support of faculty and peers that they know. They feel more comfortable."

Last winter, 20 Mount students traveled for three weeks to Shanghai to study traditional Chinese medicine practices. Nursing, pre-med, biology, and sociology students would spend the morning with a guest lecturer. In the afternoons, they might go to a museum dedicated to traditional medicine, or visit a tea shop to learn about the centuries-old practices of using herbs to stay healthy. Morales explains the benefits to this cultural exchange for Western medicine students. "Whereas we treat illness; they prevent illness. They view illness in a different way in China."

At the same time, the Mount also offers options for independent, long-term study abroad to its students. One student spent the spring at an internship in Dublin, Ireland. Another student spent a semester in Costa Rica. Christina Green is a sophomore nursing student, who participated in the Shanghai Eastern medicine program and is now going to study in South Korea with the help of Mount Saint Mary College. "Learning about Traditional Chinese Medicine, visiting different Buddhist temples, and walking along the Great Wall was an experience that intensified my desire to embark on another study abroad in Asia," Green says. "I am beyond excited to go abroad to Asia once again!"

The benefits of studying abroad are visible, Morales explains. "Students tend to come back and, in their final years at school, seem more confident and more determined," she says. "They may not know the language, so they have to develop the skills to sustain themselves, especially students living independently for a semester. Employers are looking for the skills that those who study internationally bring back with them–the ability to work with diverse populations and problem solve. Cultivating the mindset of being global, in the times we live, is very important."

All Aboard to Study Abroad

Many prep schools in the Hudson Valley offer study-abroad options to middle and high schoolers. Here, a few featured programs are listed to highlight the variety that’s available.

For over a decade, SKS has offered Spring Term trips for small group learning. In the Czech Republic, students partner with local students for a blend of educational and cultural exchange. Science students travel to South and Central America for an immersive experience in ecological research. There’s also the Call to Adventure expedition, where boys test their physical and mental limits and employ athleticism, problem-solving, and team work. Each trip focuses on the Hero’s Journey–a process of honing leadership, insight, and adaptability—which is a tenet of each boy’s SKS experience.

Millbrook’s World Language Department provides language immersion programs through their School Year Abroad (SYA). SYA offers the truest immersion experience for highly committed students, who want academic challenge and adventure. Over the course of a nine-month stay, students can travel within their host county, try new foods, and discover what life is like. Each SYA program is different, but some offer a culminating project: delving into a specific topic of study, group collaborations, and art installations. With the extensive language immersion experience, students undergo a linguistic “code switch” about three months in, where they move from simultaneous translation into fluency.

Students travel at least once during their high school years, financed by intensive student fundraising as well as grants from the Berkshire Taconic Community Foundation and the German government. Destinations include Munich, for students studying the German language, or Spanish-speaking countries, for students studying Spanish, and last about three weeks or more. “These trips encourage real, practical foreign language learning,” says Stephen Sagarin, Faculty Chair. “Our slogan is, ‘Small School, Big World,’ and travel every other year broadens our students’ experience of the world we all share.” German Waldorf students also come to study at the Berkshire Waldorf High School for three-to-six-month stays.

Launching their International Student Program five years ago, the Harvey School has partnerships with overseas schools for trimester-long student exchanges. Harvey students who study a foreign language often also signup for year-end trips abroad, which include some sight-seeing and home stays. The Harvey GOES program consists of 12 students who are paired up with students at partner schools to investigate a prearranged topic or theme. They meet for two weeks at the Harvey School and two weeks at the partner school to explore the topic in depth and detail. Previous such projects have partnered with a school in Italy to investigate immigration by Syrians to Italy and by Latinos to the US. This year, students are partnering with a school in Hungary to study New York and Budapest–two great cities on rivers.

Jealous of your kids? Follow Chronogram.com's Daily Dose this month for information on winter learning vacations with Omega Institute in Costa Rica and other locally led study-abroad programming for adults.

The original print version of this article was titled:
"The Global Classroom: Studying Abroad"