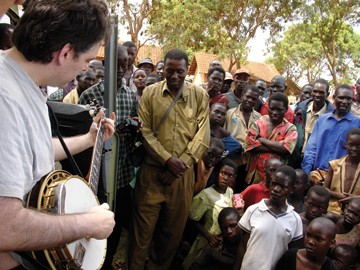 To some, the banjo is considered the quintessential American instrument. It evokes our tradition of bluegrass and country music, while its bouncy sound sets it apart from other instruments in the European string family like the guitar and violin. Even though centuries have passed since it first became popular, the banjo has never entirely shrugged off its stereotype as a lower-class instrument.

Bela Fleck—banjo player extraordinaire and winner of 11 Grammys—is familiar with this preconceived notion: “I grow tired of the hillbilly stereotypes, as I am not a hillbilly myself, and feel very connected to the banjo,” wrote Fleck in an e-mail interview. In an effort to dispel these misguided assumptions and to shed light on its history, in 2005 Fleck traveled to Africa, the birthplace of the banjo.

Throw Down Your Heart, directed by Sascha Paladino, documents Fleck’s musical journey through Uganda, Tanzania, Gambia, and Mali. “Music is in every aspect of life in our local communities,” says translator, guide, and finger pianist Walusimbi Nsimbambi Haruna in Uganda. “In everything that one does, music is there.” Fleck’s adventure transports him to small towns and larger cities where he jams with both local musicians and regional rock-stars like Oumou Sangare of Mali. (Sangare will be performing with Fleck at Caramoor in Katonah and in Central Park on July 3 and 5, respectively).

Language presents no barrier: Fleck accompanies women’s singing in the village of Nakisenyi, Uganda, and duels master guitarist Djelimady Tankara in Mali. Fleck’s deep respect for fellow musicians is apparent. His curiosity makes him an enthusiastic student, while his talent allows him to blend effortlessly with guitars, drums, finger pianos, a giant xylophone, and lesser-known traditional African instruments such as the n’goni and akonting. The result fuses traditional African songs with the original improvisations of Fleck and contemporary musicians.

The n’goni—the traditional instrument of Mali—is a three-stringed, lute-like instrument made out of wood. The akonting is also three-stringed, but is made out of a gourd with an animal skin stretched tautly over it. Many consider the akonting to be the predecessor of the modern banjo. It was originally brought by slaves from Western Africa to southern plantations. During the minstrel shows of the 1800s, the banjo gained wider popularity and evolved into the instrument familiar today, with such features as the round, drum-like body, five strings, and ornate neck. When the banjo is played alongside these instruments, it is, as Fleck says, as if the sound belongs in the music of Africa after all. Throw Down Your Heart on Rounder Records, the companion CD to the film, captures this interplay of sounds.

A Poem: There Should Be

A Poem: In Hiding