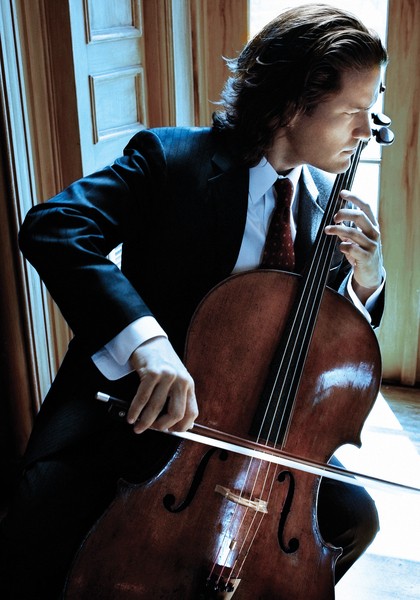 Perhaps it’s no accident that Zuill Bailey’s name rhymes with “drool.” Or “cool.” His remarkable good looks and charming personality no doubt enhance his appeal with audiences. But it’s his technical finesse on the cello, of course, that attracts listeners in droves. Where will he play next?

“Let’s see,” says Bailey, who will perform at Maverick Concerts on August 29. “I’m going to Sitka, Alaska, tomorrow, then I play the Dvoák concerto at the Nashville Symphony, then Santa Barbara in early July, then I play the Bach suites in New Mexico, then Australia, and then I think I come see you? No, no—then I go to Ravenia [Chicago] and play the complete works of Beethoven, and then to Maverick, to play the complete works of Mendelssohn.”

He pauses briefly, then blasts out a Herculean laugh, suddenly realizing that he’s all over the place, both musically and geographically. “I didn’t even think about that!” he says.

To drop all the names (Itzhak Perlman, for one), orchestras (Moscow), and venues (Carnegie Hall) that Bailey has performed with and at would require a ridiculous amount of ink. Suffice it to say that he is one of the busiest and most sought-after cellists on the scene today, and he is grateful that he picked up his instrument at the age of four.

“I was born into a musical family,” he says. “An incredibly supportive family that gave me the opportunity to find the things that I love. To find my love.” He speaks affectionately of his beloved instrument, a 1693 Venetian Goffriller used by Mischa Schneider of the Budapest String Quartet for 30 years. “I find it very therapeutic,” Bailey says. “It’s the one instrument you can actually wrap your arms around. I’ve always felt that it’s like a person. It’s such a warm feeling. So whenever I feel, I try to channel that through the cello. I feel very lucky to have started it so young. Because when I play, it’s the most natural thing I can think of.”

Bailey has recently become entangled in a medium he never expected: television. Network appearances include a recurring role on the HBO series “Oz” and the NBC series “Homicide,” as well as on A&E, NHK TV in Japan, and several live broadcasts. “When I was asked to do these television shows that were so far away from my particular audience, I thought it was the ultimate outreach,” he says. “It’s a super-grand way of reaching an enormous audience that probably didn’t and don’t go to classical concerts. When I represented myself and the cello, I represented the music and I didn’t dumb it down.”

Bailey has performed at Maverick at least five times previously. “The venue is historic,” he says. “These musical instruments resonate with everything around them, including the people, and everything there is made of wood. And it’s in the forest. There really isn’t a more beautiful sound than the sound one hears from the Maverick stage. I truly respect the series. The concertgoers there are tremendous and knowledgeable, and [Music Director] Alexander Platt is terrific. I take my hat off to him.”