Entering the exhibit, we are first faced with Yoan Capote’s Status Quo (Reality and Idealism) (2010) sculpture of an oversized scale. On the one side is a large gold dish, and on the other a smaller black one. This work serves as an authoritative preface that symbolically announces Blackness as a central theme of “Stressed World.” 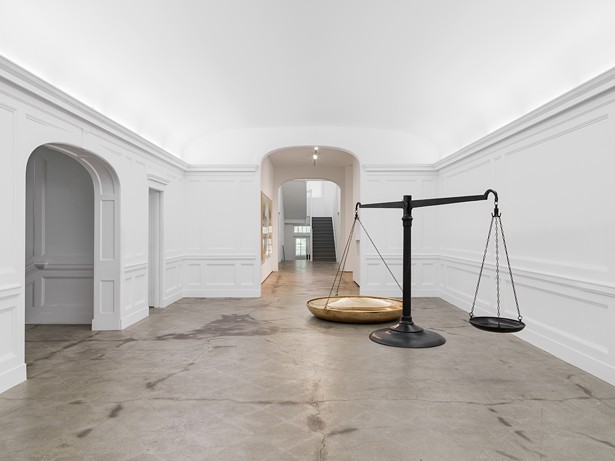 The show then takes the viewer on a twisting path of diverse aesthetic narratives, some of which seem to contradict the foreboding title itself. Among those are Ifeyinwa Joy Chiamonwu’s photo-like charcoal drawings on paper. The deep tones and natural ebullience of her chosen subjects—African women and girls—reflect the traditions and myths of Nigerian people while providing a kind of stanza to Capote’s sculptural “opening lines” with respect to balance and power. One such work, Lost Page (2018), is of a goddess-like woman weaving a large basket, her gaze set entirely upon the time-honored object that she is creating with her bare hands.

Another heartfelt section is a room of mixed media works by Lyne Lapointe. Her charming characters made from linen and fabric display a sensitivity and psychotherapeutic quality yet are also reminiscent of the lonesome world of the Little Prince on his remote planet. Other digressive moments provide a romantic glance of a “time gone by” that remains relevant, such as Andy Warhol’s New York City Scene (1976—1986) series of black and white photographs of a nondescript street corner repeated in a grid.

While many of the artworks included in this exhibition appear accessible and even gleeful, others accentuate the weight of our times. The titular Stressed World (2011) piece by El Anatsui is an enormous installation composed entirely of ravaged aluminum bottle caps bound with wire, a candid comment on the scale of global consumption and waste. Jackie Nickerson’s series of digital C-prints from 2019 are an uncanny foreshadowing of the 2020 virus reality, when the entire planet was turned upside down simultaneously and without discrimination. Each of her eight photos—with titles such as Clear Head and Cloud—includes a lone figure that is somehow obscured by a painted plastic object or other random covering, suggesting personal desolation and disconnection.

Another example of the anxiety of the “Stressed World” theme is a room of bleak paintings by Pierre Dorian. Although these visions of simple architectural scenes including hallways, corners, and doors look harmless enough, the haunting alienation of those spaces is palpable. Abstract works on paper by the late Barkley L. Hendricks also express a sense of solitude that peppers the entire exhibit, and his Untitled (1971) painting of nine ellipses set against a green background provides a perfect lyrical reverberation with Hank Willis Thomas’s Endless Column (2017) sculpture of nine basketballs frozen in time, expanding upon his concern with the commodification of Black men and their identities.

As I made my way through, I could hear the Talking Heads’ “we’re on a road to nowhere” melody ring true for the dynamic assemblage of artworks included in this show. The works have something powerful to say, yet the fantastical “nowhereness” of art itself as a parallel realm of understanding provides an imaginative road of insight that is equally idealism contrasted with harsh realities, indeed a genuine reflection of our evermore stressed world.

“This Tender, Fragile Thing” at The School in Kinderhook

On the Cover: Sculptor Nick Cave's "Arm Peace" at Jack Shainman's The School