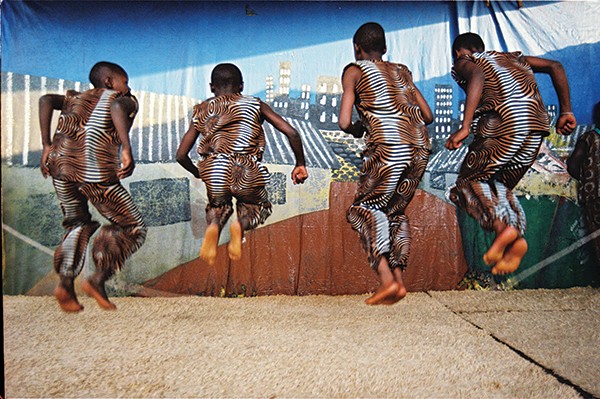 In 2001, Tracy Christian was an out-of-work actress lamenting her stalled career over lunch in Manhattan with a reassuring friend, the stage actress Kathryn Grody. Asked what else she had going on, Christian mentioned a trip to Africa that she was planning with her husband, Hal Denton. "I can't believe it, this is so kismet," said Grody excitedly. "Can you do me a favor while you're in Nairobi—stop by an orphanage and give them $50 for me?" It was a small request that would have an enormous impact on Christian's life. She arrived in Nairobi with not much more to go on than a PO box and the name of the orphanage, Shangilia Moto Africa ("Rejoice, Child of Africa"). According to Grody, the home's director, Kenyan actress Anne Wanjugu, had devoted her life to rehabilitating street children through the performing arts.

When Christian arrived at Shangilia, the visit felt like an act of fate. "The door opened and Anne came out, and I remember thinking that I was in the presence of somebody great," says Christian, from Woodstock and New York City. "So much personal spirit, power, and grace—it threw me off my heels a little bit." But what really knocked her over were Wanjugu's "children"—150 orphans who, with bare feet and jubilant voices, stood up on a makeshift stage and sang "We Shall Overcome" just for her. With its lessons in singing, acting, dance, acrobatics, and martial arts, Shangilia was no ordinary orphanage. Training in theatrics was giving the children—many of whom had lost one or both parents to AIDS—a sense of purpose and self-possession they hadn't known before. Christian had never used a video camera, but she came back with borrowed equipment and started filming. A documentary—and a filmmaker—was born.

Ten years in the making, Street Journeys begins as a simple story about a strong, enigmatic woman and her unusual orphanage, and then takes unexpected detours into the terrain of love, loss, sorrow, redemption—and ultimately, triumph and joy. "It was my mission to bring an uplifting story out of Africa," says Christian, who was also driven to raise money and awareness for the home and its model of healing and transformation through the arts. Her creative team included three Hudson Valley locals: composer Daniel Hulsizer of Woodstock, editor Anne Barliant of Saugerties and New York City, and singer-songwriter Donna Lewis of Woodstock and Wales, who gave the film its theme song, "Follow My Way."

Over the past year, Street Journeys has screened at Lincoln Center's "Art of the Real" documentary series, the St. Louis International Film Festival, and the Africa World Documentary Festival. Peter Travers of Rolling Stone called it "an exhilarating documentary that speaks to the nurturing power of art—prepare to be wowed." In a packed house at Upstate Films Woodstock last March, the film made its Hudson Valley debut in a screening sponsored by the Woodstock Film Festival. "Tracy is driven by passion and love for her subjects and the filmmaking process," says Meira Blaustein, cofounder and executive director of the festival, who signed on as a coproducer of Christian's next documentary, The Drivers, which tells the story of a volunteer corps of World War II ambulance drivers who go on to create the first high school exchange program, AFS.

"Every time I show the film I'm surprised and overwhelmed by the way people let the story of these kids enter their heart," says Christian. In other words, bring tissues—but expect to leave inspired.

On June 22, at Fiberflame in Saugerties, a benefit event will include wine, hors d'oeuvres, and a silent auction starting at 6:30 pm, followed by a screening of Street Journeys at 8 pm. Admission is $10 in advance and $12 at the door. A Q&A with Christian will follow, and a portion of the evening's proceeds will be donated to support the performing arts program at the Shangilia orphanage. Fiberflamestudio.com.