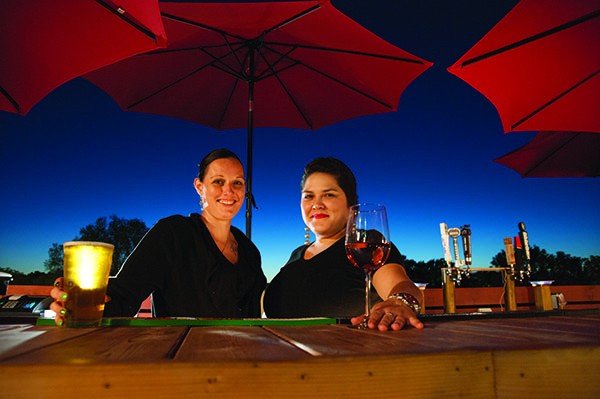 This city knows from challenges.

When IBM—aka International Big Mutha or I've Been Moved—pulled the plug on thousands of well-paid jobs in the 1990s, no place was hit harder than Kingston, where the company had funded much of the commerce, built environment, and cultural landscape for 40 years. Some thought it might be the beginning of the end. But two scant decades and a minute later, the city is home to several dozen cutting-edge tech companies.

Midtown, once the commercial center, was hardest hit of all. Textile factories had long since been shuttered by the time IBM fueled a sprawling big-box strip in neighboring Ulster and then vanished. But Midtown hung on; the Ulster Performing Arts Center never left, the Seven21 Media Center grew strong roots at the other end of Broadway, and these days, the vacant factories are artists' studios and apartments.

Back in the 1960s, federal Urban Renewal zealots razed much of the Rondout waterfront. Today that waterfront hosts a maritime museum, a trolley museum, a cultural center, and one of the Hudson Valley's finest live-music-infused riverside pub crawls, to just touch on a couple of highlights. Then there are the galleries and fine shops, the marinas and event spaces, and the waterfront promenade. The Strand sparkles.

Uptown? Uptown is what the British thought they could burn to the ground and put an end to Kingston's pesky rebellious nature back in 1777. Modern-day Kingstonians reenact that debacle every year with great glee; it's an excuse for a citywide theatrical presentation and general wingding, only one of a long list of open-air festivals, block parties, and bashes that regularly bring the citizenry and their guests out to dance and party in the Stockade streets. Like the tech-spertise, that rebel spirit is rooted here to stay.

Things are never dull in Kingston—never have been. Remember, this is where they relocated the capitol of New York State to keep it safe, only to have it get burnt down. Political rivalries occasionally veer into hot messes worthy of a miniseries or reality show. Part of Washington Avenue has been gobbled by an alarmingly persistent sinkhole. There exist several excellent novels that can be classified as Kingston noir fiction, and no longtime resident would find the dastardly doings depicted to be much of a stretch. Some crazy shit has happened here, probably always will.

New proposals, brought forward with enormous energy, are met with a mix of joy, principled critique, and downright grouchiness. It's partly this very edge, this clamorous cacophony, that makes the place inspiring and invigorating. Ideas battle their way into acceptance and grow strong and gorgeous in the process. For every Kingston success story, two also-ran ideas have long since faded into obscurity. People regroup, rethink, refine, and rename things, and by the time the dreams—dozens of them—become realities, they're stunners.

Uptown, for example, has seen years of squabbles over parking, over business hours, over the "Pike Plan" awnings that are, depending on who one asks, the ruination of historic facades or a visionary approach to letting people shop without getting rained on. Through it all, the wise and the talented, the grounded dreamers of big dreams have persisted. Standout retail has come and some has gone. The strongest—places like Bop to Tottom, Columbia Costume, Tonner Doll Company, and Catskill Art Supply—thrive and attract equally singular ventures: new retail rockstars like Jay Teske Leather, hip accounting and computer wizardry, live entertainment (in a centuries-old church, at a repurposed Vaudeville venue, on the lawn of the uber-historic Senate House, and in the very streets themselves), and an array of restaurants that could make a foodie weep tears of joy.

Uptown's Stockade, some of the first-settled and most hotly contested real estate in written North American history, is curated by passionate historians who'll give you a time-machine walking tour. Repurposed and refreshed architectural gems like the Kirkland Hotel and the Opera House anchor a landscape speckled with arresting public art and sometimes with art that gets people arrested.

Midtown began its existence as a simple connecting road from the waterfront to the Stockade, fleshed out with utilitarian features like a high school and hospital. As noted, Midtown has struggled. Nowadays, anyone who ignores Midtown is missing out on free live music at places like The Anchor and Keegan Ales, home of some of the Hudson Valley's first and finest craft brews. The STRIVE (Strategic Taxpayer Relief through Innovative Visions in Education) Project has brought Midtown its own SUNY Ulster campus in a repurposed elementary school. At Broadway's uptown end, Seven21 media offers state-of-the-art production studios and office suites to twenty fulltime clients and whoever else needs to, say, use a green screen or animate something. At the downtown end, UPAC is presenting Chaka Kahn next month.