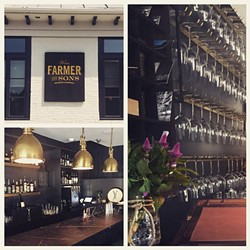 Hudson, NY continues its rapid transformation into a bona fide tourist destination, and husband-and-wife restaurateurs Kirby Farmer and Kristan Keck have had front row seats. As frequent weekenders prior to the purchase of their home in Germantown in 2008, they’ve watched as old, familiar buildings received sweeping renovations, reborn as boutiques, galleries, and some of the best restaurants in the area. Warren street has got a fresh coat of paint (and then some) and attracts the lion’s share of Columbia County’s million-plus annual visitors. When it came time for Kristan and Kirby to scout locations for their first restaurant, Hudson was at the top of the list. The deal was sealed when they found a beautiful 1830s brick building with plenty of charm and room for an inn upstairs, and after a top-to-bottom renovation, Wm. Farmer & Sons boarding house and barroom was opened to the public last May.

Kristan and Kirby worked with long-time friends Steve Schappacher (Architect) and Rhea White (Designer) of SchappacherWhite DPC to realize a carefully curated aesthetic. Architectural features are allowed to shine, and both barroom and boarding house exhibit an air of modern rusticity, familiar enough to be comfortable, but with a luxurious refinement. The boarding house features 10 tastefully appointed rooms, showcasing local products and workmanship wherever possible, with sliding barn doors and weathered antique furniture drawing frequent comparisons to Restoration Hardware. Each room is unique, with different layouts and appointments, but they all share one thing in common: a surprisingly reasonable price. The Anne Marie suite, for instance, offers two rooms, a kitchenette, full-size fridge and mini-bar at a competitive $215 a night. With the amount and quality of amenities provided at the price point, Wm. Farmer & Sons sets the bar for local lodging, which begs the question: how’s the bar room? 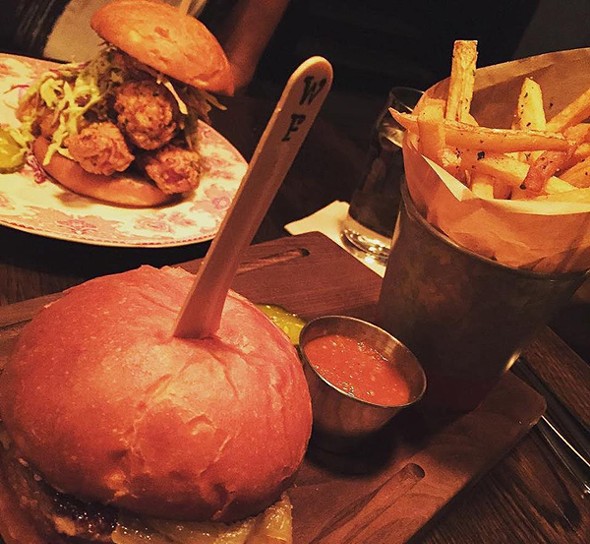 In a word, exceptional. Kirby Farmer, a graduate of Poughkeepsie’s Culinary Institute of America, spent years as a private chef in New York City. Much like the décor, the menu features familiar items brought to the next level. Patrons can opt for a Tavern Steak with greens and a whole-grain mustard sauce, or a cast-iron burger with a house-made tomato relish. On a recent trip, however, we tried to put the kitchen through its paces, and were continually impressed. We started with sardines served over escarole and grilled octopus with pureed cauliflower and piquillo peppers; two dishes often attempted but so rarely well-executed in a restaurant setting. Both were excellent. The sardines were cooked and seasoned perfectly but simply, replete with that salty texture that’s eminently satisfying about the much maligned fish. The octopus too, was executed flawlessly. Octopus is notoriously difficult to really get right; cook it too little and it’s slimy and chewy, too much and it gets rubbery and unpalatable, and the window is extremely small. Despite being a thicker portion, Wm. Farmer & Sons nailed it, and the acidity of the red pepper provided the perfect complement.

Main courses continued to impress. We had duck confit, served cassoulet style with savory white beans. A frisee salad served on the side with a light vinaigrette offered the perfect palate cleanser. The Appalachian Trout, however, stole the show. Served atop a bed of leeks, perfectly roasted fingerling potatoes and a crawfish sauce delivering a touch of creaminess, it had a deliciously crispy skin but was still mouthwateringly tender. Some time, however, must be spent to highlight the bar program. It was designed under Sasha Petraske, proprietor of New York’s Milk & Honey, a bar often credited as being one of the epicenters of modern mixology. The focus lies squarely on simplicity. None of the drinks were too complicated or outlandish, but rather consist of just a few ingredients with an emphasis on technique. The El Guapo was a perfect example: comprised of just tequila, Cholula, cucumber, and lime, it presents as light and sweet on the palate, but the tequila and Cholula provide a satisfyingly salty finish for an added dimension. 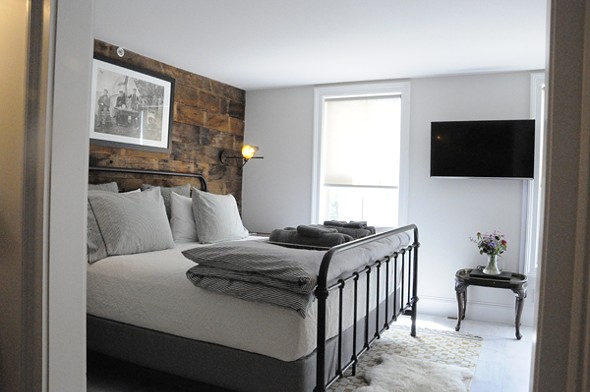 The rest of the bar program plays its cards pretty close to the chest, offering familiar classics like an old-fashioned, a dark and stormy, or a hot toddy. With so many restaurants branching out into the esoteric, it’s unusual at first to see a cocktail menu comprised of old standards. It’s perfect though, for Wm. Farmer and Sons. From the décor to the food, Kristan and Kirby are perfectly comfortable simply making you comfortable. Much like the revitalized town of Hudson, they offer something you’re used to, that you’re familiar with. Just a lot nicer.