Stars for August: Fire and Water 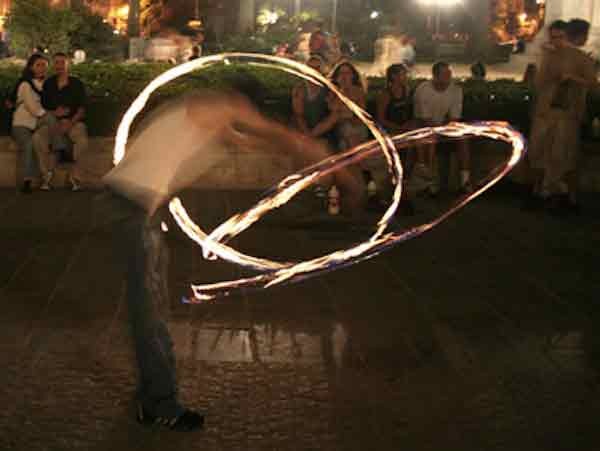 August combines the passion of the fire signs with the empathy of the water signs. Let's start with the two lunations—the Leo New Moon of August 6 and the Aquarius Full Moon of August 20. The Leo New Moon is nothing short of a magnificent chart. In the Northern Hemisphere, the New Moon takes place at Lammas or Lúnasa—the First Harvest. It's the midpoint between the summer solstice and the autumn equinox, one of the eight most potent moments of the solar year. Those points include the solstices and equinoxes (the quarter days) and the midpoints of those locations (the cross-quarter days).

The New Moon is conjunct the asteroid Vesta. The brightest asteroid, and also one of the most complex, it describes some of humanity's most profound gifts and its deepest shadows. Her theme is service, though when Vesta is in the picture so prominently, there's the question of whether the needs of one who offers himself or herself are met. Vesta seems to insist on total devotion, though we walk the line between that and sacrifice.

Vesta's symbol is a chevron with a flame and is symbolic to the goddess Vesta, the Vestal Virgins of Roman times, and the sacred flame they would tend and never let go out. The real devotion that the astrological Vesta represents is to the inner fire that we all carry, the creative and sexual passion at the core of everyone.

Yet because our culture tends to corrupt the topics that Vesta honors, she can represent a diversity of shadow themes—shame, for instance, or the obsession with appearance and glamour—and that in turn can point to where we are distracted from true inner devotion.

The Aquarius Full Moon takes place on August 20. It’s the second Aquarius Full Moon, since the Sun and Moon also opposed each other immediately after the Sun entered Leo on July 22. The Sun and the Moon reach opposition at the end of the Sun's run through Leo, giving the event an edgy quality. This is often true of the Sun's last days in a sign, though especially if there is a significant solar-lunar event right then.

Minor planets are involved—the Sun is conjunct Ceres and the Moon is conjunct Nessus. The subject matter here involves the ways in which complex emotions become subject to power struggles. We are so accustomed to this in our relationships that many people will tell you it's normal: for example, the notion that if you have deep feelings you can expect someone to use them against you.

There is a special caution to be aware of power dynamics between mothers and daughters. These can be difficult to identify, especially if the dynamics have continued unconsciously for generations. Discerning that will take some special honesty or a knack for the obvious. Honoring the independence of young women, including the right, responsibility and necessity to make mistakes, is an essential message of this chart.

In the background of this astrology is the grand water trine. Jupiter is now in Cancer; so too is Mars. Chiron and Neptune are in Pisces. Saturn and the North Node are in Scorpio.

The message: everything has an underlying emotional dimension, and that's the one that will dominate the experience of being alive. Emotional contact is essential, which means getting these subjects off of the intellectual level and liberating the emotional level from our obsession with obsession.

Water in any form moves; where there is a blockage, look for where it's necessary to let go and let flow. The grand water trine needs to be handled consciously and carefully—it's like a whirlpool. It's easy to get drawn into, and difficult to get out of, so you must be careful as you experience and express your emotions.

I suggest you invest extra energy into understanding what you are feeling and what other people are feeling, remembering that there is a difference between the two. Honoring that difference is called having boundaries, though it's more often said than done. The month begins with a beautiful New Moon encouraging you to define your own space, set your purpose and recognize that you cannot help others if you don't help yourself.

That said, being of service to others and to humanity can be a healthy way into a larger world and into true participation. It’s a way to honor the existence that we all share, and the mutual presence we all thrive on.