Staff Picks: 6 of Our Favorite Hudson Valley Meals of 2019 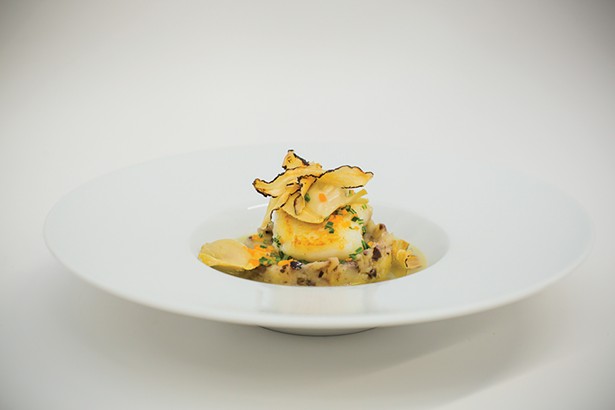 It is a timeless truth that those in the publishing business are a bacchanal bunch that, when deadlines allow, love to eat, drink, and be merry. High-brow restaurants and greasy spoons—at Chronogram, we like it all. We asked our fellow staffers to weigh in on their favorite Hudson Valley meals of 2019, to give you some culinary inspiration as we wade into the new year.

As is fitting, our venerable editorial director and known gourmand, Brian Mahoney, has opted to relate his favorite meal of 2019 entirely in his own words. Of dining locally in 2019, he says:


“Despite eating some truly stellar meals in the Hudson Valley this year—Fish and Game, Red Onion, and Bia, I’m looking at you—I also was subject to a number of disappointing restaurant experiences in 2019. After one particularly mediocre-yet-expensive meal I thought, “Maybe I’m over eating out.” Thankfully, those suboptimal meals were few, and the market weeds out underperformers over time.

“For the March issue of Chronogram, I wrote a profile of Michael Kelly, chef/owner of Liberty Street Bistro in Newburgh, remarking that what I ate there in February was ‘the best meal I've eaten so far this year.’ I guess I peaked early in 2019, as that multicourse meal stood the test of time. Sitting by myself at the bar, I ate the following: a dozen Mystic oysters lightly dressed in Mignonette; frisée au liptauer, a winter salad with a fried six-minute egg on top; pork sugo orecchiette—a spicy twist on an Italian classic; followed by a plate of offal—braised beef tongue served with fried sweetbreads and tripe. The kind attention of head bartender Dave Garrett (who served me a delightful gin and carrot juice cocktail), was the service punctuation that chef Kelly’s food deserved.”

Office manager Molly Sterrs is renowned for her culinary ventures around the Hudson Valley. Anytime a new restaurant opens or a chef changes, she’s all over it. So, we take her opinion pretty seriously around here. “My top meal of the year was at The Amsterdam on a random Monday night,” she says, a little bit surprised. “It’s the best meal I’ve had since the pork schnitzel at Brushland last year. I was completely floored.” This homerun dinner kicked off with steak tartare, followed by burrata with figs and prosciutto, then Rohan duck with figs and fingerling potatoes as the main.

Renovation & Innovation: The Amsterdam
A New Chef and a New Chapter for The Amsterdam
In January 2018, we profiled three new Hudson Valley restaurants that underwent extensive renovations before opening their doors. Read about The Amsterdam in Rhinebeck.
By Melissa Esposito
Restaurants

According to digital editor, Marie Doyon, “The food at Silvia has only continued to improve,” since the Woodstock eatery opened in the former location of Joyous Lake in 2017. During the summer, the restaurant makes ample use of its grill to offer up wood-smoked mains and veggie side dishes. One warm July evening, she went with her partner and sat outdoors under the pergola. Her partner ordered the pastured pork chop from Atticus Farm in nearby Shokan, and she got the wood-smoked and brined chicken thigh, with miso bone broth, baby turnip, crispy shallot, and garlic paste. “Both dishes were incredibly succulent and tender, with just the right amount of smoke flavor, accompanied by delicious roasted veggies,” she says. To go with dinner she ordered a watermelon margarita. “Honestly I was nervous because cocktails are usually too sweet,” she says. “But this was perfectly balanced, not at all saccharine, and made with fresh-pressed watermelon for a refreshing mid-summer aperitif.”

“I’m pretty sure I’ve eaten eaten my weight in the meatloaf sandwich from The Pines this year,” says branded content manager Ashleigh Lovelace. Under the ownership of musician Jeremy Bernstein, aka Burnell Pines the roadhouse offers a laid-back environment with a globally inspired, locally executed menu of hearty home-cooked fare and live music on the reg. (Read our Pines profile). “It's super cozy and right around the corner from my house, so it feels like an extension of my kitchen in a way,” Lovelace says. “And it has enough mainstays that stick around on the menu for a season or two to make you feel like you can have a regular order there.” Hence all the meatloaf. Oh, and another thing: “I'm also addicted to the spicy grapefruit margarita,” Lovelace adds. “It's basically a paloma.”

For our sales manager, Lisa Marie Montanaro and her partner Andrew, Heritage in Wappingers Falls is a go-to as much for ambiance as for the food. (It’s also on Chronogram Smartcard!). “We like to eat in the back room, which has photographs of Biggie and Jack Nicholson and giraffes,” she says. “The first time we went there was a live band and the second time a mariachi band!” The burgers, branded with the Heritage “H” are a favorite, as well as the brunch. “They have creme brulee French toast and bottomless mimosas, which I appreciate, even though I don't drink,” Montanaro says. “In my opinion, they are the best place for a meal on this side of the river.”

Time for brunch! $1 oysters and $15 bottomless mimosas. Don’t forget to finish your meal with this Cast Iron Apple Crisp, made with local honeycrisps from our farm in Milton (they were picked last week)! #heritagefooddrink #applecrisp #brunch #bottomlessmimosas #staub

“What I like about Rip Van Winkle is its mom-and-pop style ambiance and cuisine, along with home-cooked meals, and beer made in-house,” says marketing specialist Victoria Levy. “Anytime I've gone in there, both the father and son are there greeting customers and making drinks—yes, they have a full bar there, in addition to the brewery, for those who feel like a mixed drink. The son makes one spectacular Bloody Mary!” She recommends getting a flight of beer so you can taste the wares while you watch the brewing operations through the glass wall. For food, Levy is a fan of the classic bar fare: homemade pizza, wings, and she says, “you can't go wrong with any of their pastas and parms.” Be warned, the portions are generous, which makes for great lunch the next day. “What stands out to me about this place is that it’s a no-frills restaurant and bar filled with mostly locals, yet you can see the brewery,” she says. “Picture going home to your folks for the holiday, and they've built a brewery in the dining room!”

Spend the Perfect Weekend in Catskill, NY
Interested in exploring the revitalized village of Catskill, sampling its craft beer, and learning about its rich industrial and cultural history? We've got you covered. From a pirate tiki bar to the birthplace of the Hudson River school of painting, here is everything you need to know about where to stay, what to do, and where to eat in Catskill, NY.
By Melissa Dempsey
Catskill