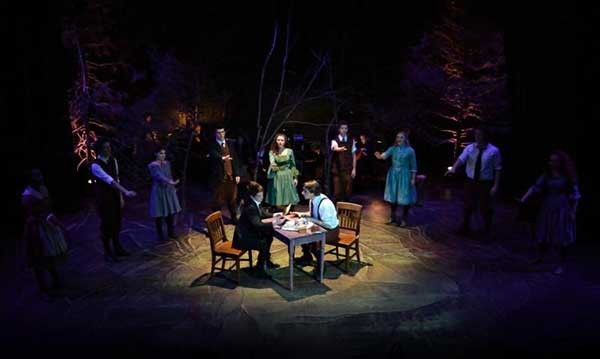 In 1891, Frank Wedekind's coming-of-age play "Spring Awakening" (Frühlings Erwachen) caused a scandal in Germany for its scenes of homoeroticism, male masturbation, sado-masochism, rape, suicide, and references to abortion. In 2006, Duncan Sheik and Steven Sater adapted the provocative play into a Broadway musical, whose run included 900 performances at the Eugene O'Neil Theatre and a US and Canadian national tour. The show would go on to win eight Tony Awards, including Best Musical and Best Original Score, the 2008 Grammy for Best Musical Show Album, and four Laurence Olivier Awards for its London production. Up In One Productions presents the area premiere of "Spring Awakening" at the Center for Performing Arts in Rhinebeck from March 1 through 17. The stark landscape of authoritarian 19th-century Germany is imposed upon by a vibrant contemporary score of folk, pop, and rock that's expressive of the musical's focus on the tumult of teenage sexuality that even a conformist society cannot keep from blossoming. Upinonepress.homestead.com

Theater duncan sheik up in one productions musical Video