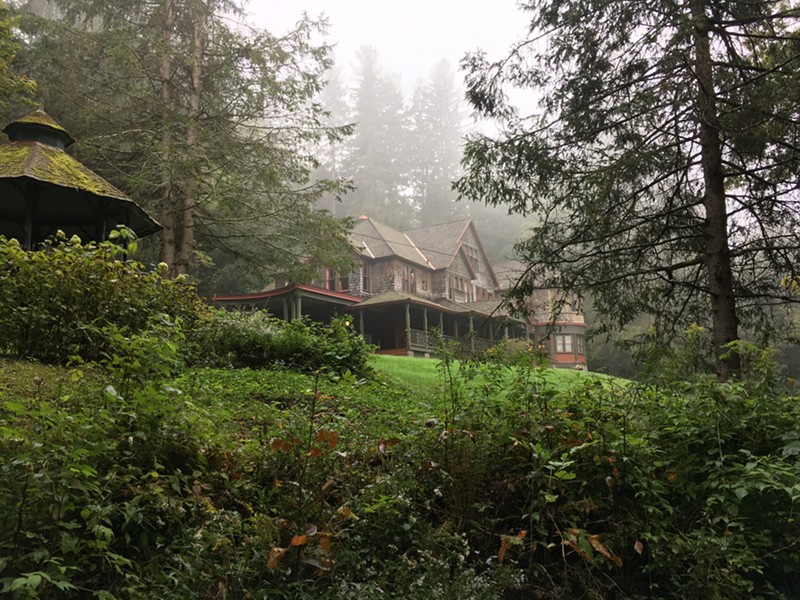 Ever imagine what it might be like to play in a Gilded Age mansion with 33 acres of the Catskills to wander? Throw in a full bar stocked with exquisite craft beverages, a superb locavore chef, and wildly imaginative hospitality, and you begin to get the picture of Spillian, the unique co-creative endeavor unfolding just over the Delaware County line in the wee village of Fleischmanns.

The house itself is a marvel. A 5,000-square-foot stick-style manse built in the 1880s as part of a summer compound for the Fleischmanns Yeast family, it has a great room with a Steinway and harp and a formal dining room with chandeliers and a vast feasting table, both with working fireplaces. There are eight glorious, themed guest rooms with all the luxe comforts. The grounds feature a meadow with bonfire pit and stone stage and an antique gazebo. Even if Spillian were just an inn, it would be a remarkable one. But this particular lodge is further elevated by the vision and mission of its founders. 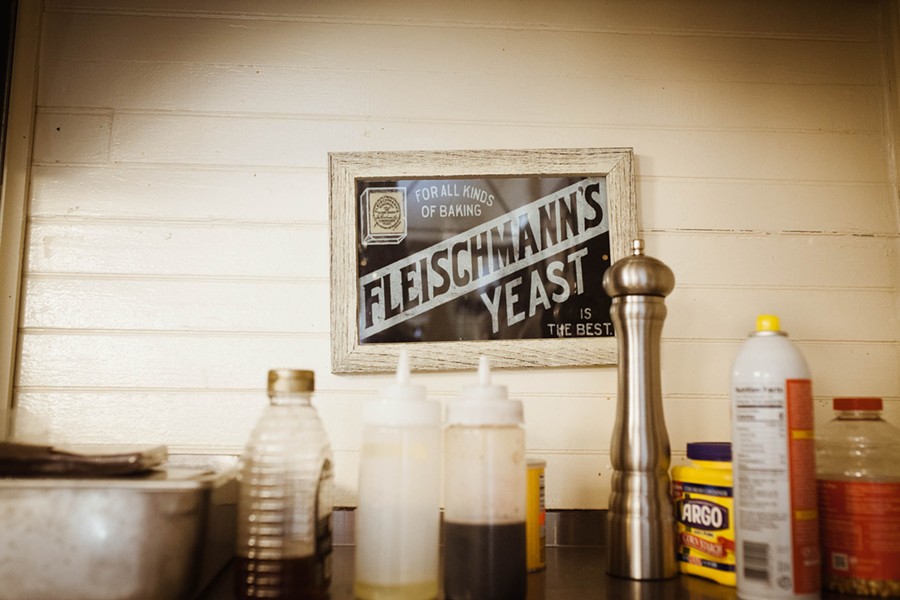 “The word spillian means to play or revel, and that’s exactly what we’re doing,” says Leigh Melander, who co-founded Spillian with her husband Mark Somerfield. “Reveling in possibilities and imagination and community.”

On the weekend of April 26 to April 28, you’re invited to join in the fun for Trout Tales at Spillian: A Mythic Catskills Weekend. “There’s deep magic to being here in the birthplace of fly-fishing in America,” says Melander. “Fly fishermen are poets; it’s a meditation and an art as well as a sport—a careful, aware way of being in nature. You’re conscious of the air and water moving, the bugs, the current, what the fish are thinking. You have to be still. There’s a lot of writing and art around it.” Besides the art of stillness involved in fly fishing, there is a quiet undercurrent of activism. “That community is the reason we still have fish in these streams,” Melander says. “Fishermen are really unassuming about it, but they’re tireless, fearless fighters for the water in a way that we’re all benefitting from.”

Melander is an expert on Epic, with a doctorate in cultural mythology and psychology and a lifelong venturesome love affair with the arts. And she knows how to throw a party. “So here we are in this really cool mansion-lodge, and we thought, ‘Let’s have a feast and invite everyone to come and tell fish stories’—that was the first year,” she says, reflecting back. “We had no idea how people would respond, but they rose to the bait.” 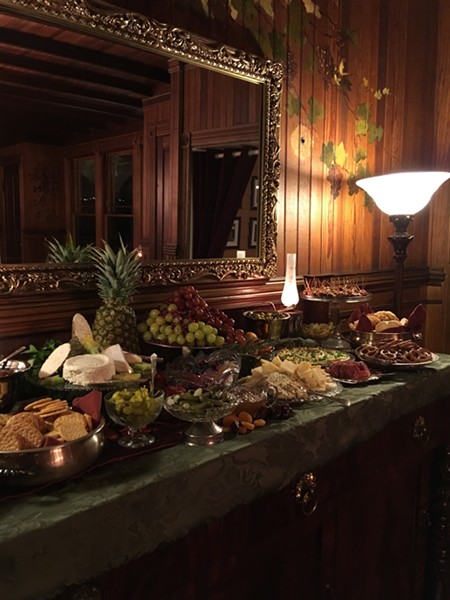 Weekend guests are welcomed on Friday with farm-to-table charcuterie and a tasting with Richard Rogers, brewmaster of Roscoe Beer Company, creators of Trout Town Ale; followed by tales of the early days of Catskills fly fishing beside the roaring fire. After breakfast on Saturday, which includes cocoa bread made in-house from a historic Fleischmanns Yeast recipe, guests can choose between a tour of the Esopus Creek with an expert fishing guide or self-guided tours of recommended shops, distilleries, and breweries. After lunch, there’s a hike and foraging session to gather fresh wild goodies for dinner and cocktails. At 3pm, Melander will lead a moving meditation. (“We’ll play at being fish,” she promises.) 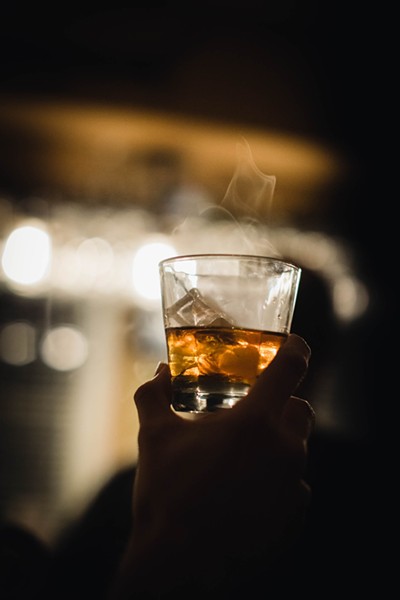 But it’s the fish stories that steal the show. “Saturday night is a total blast,” Melander says. “People sport trout-shaped hats, bring audio-visual aids, there’s singing going on. We have 50 people sitting around one giant table and getting up to share tales, at the end of the night we use wholly unscientific methods of gauging applause to pick the winner of the truly elegant porcelain fish we found on eBay for $20. They get to hold it for the night and come back to defend it the following year.” Sunday morning is dedicated to learning how to smoke fresh trout over an open fire and then feasting on the results.

The event, in its fifth year, has spawned other Mythic Catskills Weekends at the Spillian Imaginarium, as Melander and her crew frolic their way through the adventure of Catskills placemaking. The Find Your Wild Spirits weekend in May will celebrate local libations, and The Leavening, to be held June 7, will celebrate the history of the place itself and the 150th anniversary of the founding of Fleischmann’s Yeast. 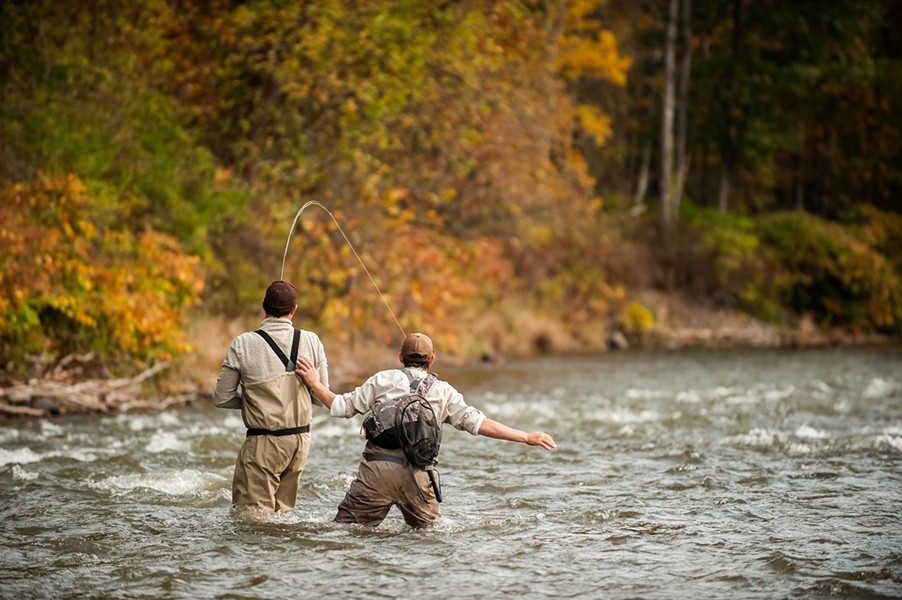 In between mythic weekends, Spillian is available for weddings, retreats, and events, and its popularity supports Spillian’s mission. “This place has a deep, rich vein of diversity and history that people are just learning to mine,” says Melander of the lodge itself, the village, and the Catskills as a whole. “Our through-line is working with regeneration and sustainability in a light and delightful way. Not beating people about the head and neck with it, but changing the story so we can grow and make and change in a spirit of revelry and enchantment.”

The original print version of this article was titled:
"A Mythical Weekend in the Catskills at a Gilded Age Mansion"