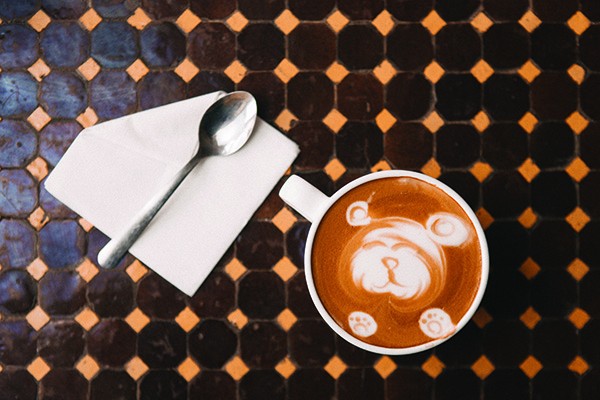 Coffee shop. Coffee house. Café. There are a variety of ways to describe establishments that serve coffee, but coffee drinkers understand that the name isn't important. What is important is the common thread that the best of these places all share: a communal atmosphere filled with ideas, creativity, and human connection. I set out to capture the region's coffee culture, a mission that took me to Kingston, New Paltz, Beacon, Cornwall-on-Hudson, and Peekskill.

Hudson Coffee Traders, located in Kingston, is known among regulars as the "courthouse coffee shop," because of the proximity to the courthouse. But even on a holiday—as it was when I visited—the shop was vibrant and bustling. The staff knew almost everyone who came in. I witnessed staff and customers hug, high-five, and dance—and this was all before their morning Joe.

Next stop: Bank Square Coffeehouse in Beacon, where talented barista Jeff Raffensperger hands me a latte with a smiling turkey drawn in the foam. "Once I start making them I can't stop," he says, as he creates several more examples of "latte art": flowers, a heart, and even a bear. There are other coffee establishments on the opposite side of town, but near the river, Bank Square is only place to sit down and enjoy some java. Bank Square owners Katy and Buddy Behney have lived in Beacon their whole lives, and say the biggest perk of owning the coffee shop is that they feel so close to their community.

When I arrived at Mudd Puddle in New Paltz, I couldn't even get in—the line of hungry patrons was out the door. Inside, breakfast sandwiches and lattes were being served up three, sometimes four at a time. Owner Michelle Walsh explained the process of coffee roasting, which she does in-house, all while effortlessly steaming milk and pulling shots behind the bar. She handed me a "black-eyed Earl," a combination of Earl Grey tea, espresso, and vanilla, as she told me that she invented the pumpkin spice latte. It seemed unbelievable at first, but after hearing her case (and tasting her drinks), I'm convinced that Mudd Puddle is the kind of café that doesn't follow trends—it sets them.

Peekskill Coffee House was visually breathtaking—I felt as if I had stumbled onto a Hollywood café set. Before I could even say hello, their hip, tattooed baristas were serving me up a cup. Despite the café's size (the building was a car showroom in a previous life), there was not one open seat to be found. It seemed to be Peekskill's community meeting place. Families, couples, friends, and laptop-bearing headphone-wearing freelancers filled the space. The only thing more diverse than the crowd was the décor, which owner Sunny Cover has been curating from secondhand stores all her life.

The final stop on my highly caffeinated journey: Cornwall-on-Hudson, a unique community situated five miles south of Newburgh. 2Alices Coffee Lounge is exactly what it sounds like—a cozy space with a collection of comfortable chairs and delicious coffee. It was easy to imagine coming back day after day, and after speaking with some of the regulars, I learned that many people do. Owners Aurelia Winborn and Mikey Jackson make their patrons feel like they are literally at home, allowing them to sit back, relax, get work done, and of course, stay caffeinated.

Taking a look at coffee houses in the Hudson Valley.