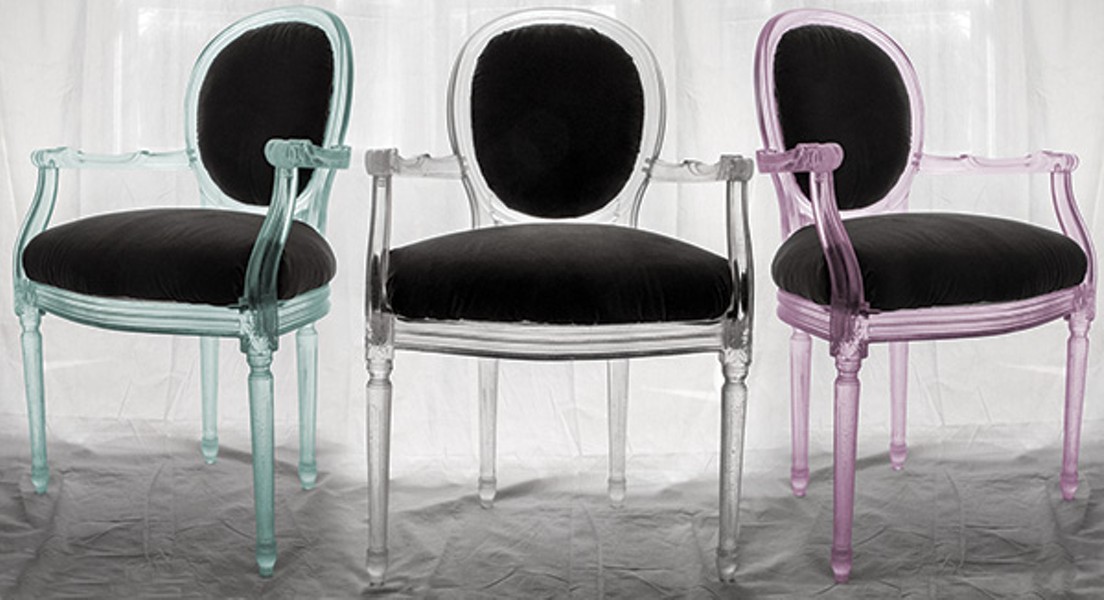 What makes Beacon-based artist Kim Markel's furniture stand out from the crowd is its ability to convey the question, "Is it art, or is it furniture?" "There's a conceptual basis for the pieces," Markel explains. "I want them to be perceived as incredibly delicate objects when they are really quite strong."

Markel's work currently comprises two home décor series, which include rococo frames and Louis XVI chairs, both projects working to convey a sense of delicacy and stability in one work of art. The clear resin frames are crafted with an intricate, hand-sculpted design that provides a faint-but-beautiful silhouette in a room. Markel's second project originates from a classically sturdy Louis XVI chair, deconstructed and transformed using dark velvet cushions and a clear resin frame that creates a bold skeletal effect. "I hesitate to call it furniture because of the conceptual ideas behind it," says Markel. "When I built it, I didn't want to make a chair, I wanted to make something that is very stable look unstable."

All of Markel's pieces start with a concept that is informed by how she wants the viewer to feel when taking in her work. She executes these ideas through furniture. After a concept is distinguished, she begins to sketch, draw, and build an armature. The armature is then sculpted into a design that becomes molded and casted using various materials, including resin—a plant-based hydrocarbon.

After deciding on the concept for the chair—"something functional and beautiful, still with detail, but without it being glaringly obvious from across the room"—it took Markel a year to execute the look she was going for. "The number of little decisions that have to be made every step of the way is almost overwhelming to think about," Markel explains. She relies on trial and error to solve problems that inevitably arise in the process of trying to make a functional object, such as how the pieces will fit together and what kind of joints to use. Markel says that she finds a lot of her pieces on the side of the road. "They are trash," she explains. "They're usually broken or not structural anymore. I use what's left, like an intricately carved leg or an angle, to form a piece I'm making."

Aside from the conceptual ideas fueling Markel's work, she also attributes Ursula von Rydingsvard as an inspiration. At age 70, Rydingsvard continues to make intricate large-scale sculptures (which have been featured at Storm King Art Center) using little more than cedar and a chainsaw, a process that depends on what's typified as a masculine trade: carpentry. Markel, too, has joined a field that's deemed nonfeminine. Constructing furniture can be hard, Markel explains, but "having a role model like [Rydingsvard] is really helpful."

Markel currently creates all of her work in her Beacon-based studio, which she shares with two other artists. The Hudson Valley native was raised in the Middletown area, and then attended Carnegie Mellon University in Pittsburgh for her undergraduate and graduate studies. After school, she moved around the East Coast until she ultimately ended up back in the Hudson Valley. With Beacon being so close to New York City, as well as more affordable, renting a studio in the area has enabled her to push her work forward rather than worrying about making rent. Visit Markel's website to view her delicate-yet-bold pieces, which meld the seeming binaries of function and art. Kimmarkel.com.