Your Guide to Sibling Rivalry 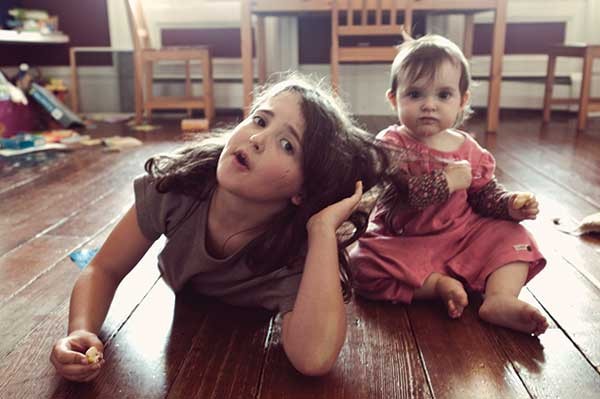 It's a dust bunny with a tiny scrap of string on it, and our daughters are arguing for its property rights. Exasperated, we're also impressed with their ability to make anything into a fight. They prize this beloved dust bunny like it's a real bunny, or the last piece of bread on the table. As they each argue their case, my husband, Owen, repeats his two mantras: "Is it better to be right or to be kind?" and "There's no such thing as justice." In the end, I throw it out.

As parents, it's challenging to cohabit with children who conjure more love than seems possible, and who spend most days squabbling. And parents can be vindicated. In The Sibling Effect, Jeffrey Kluger proves, the feeling that siblings fight all the time is true! Researchers found that 3-to-7-year-olds average a quarrel every 17 minutes; in the 2-to-4-year-old group, it's every 9.5 minutes. "Small children have almost no control over their world, and what little they do have concerns their possessions." He feels it's important to know what's behind the brawl because it isn't often hostility. He and many experts promise that the arguing serves a purpose. Kluger told AARP, "The battles you fight in the playroom are very much dress rehearsals for the way you live your life later."

Kluger says we've deemphasized the sibling relationship in favor of the parent-child or the romantic, yet it's often the relationship most fraught with conflicting emotions. Nat Bennett sums up a younger brother's perspective in the anthology, Freud's Blind Spot. "What do you do if you are born too late to compete, if you love someone more than they can properly requite, if you realize the object of your worship is, in some fundamental way, a fraud?" In the same collection, Vestal McIntyre describes how siblings pluck and pull each other's heartstrings until they get a response.

The way Owen frames it, the sibling relationship is like a marriage in reverse, moving from intimate to acquaintance in its course. The intimacy is necessary, not chosen, and so a sense of loss is often inevitable. Owen knows a thing or two about siblings, having grown up with 10 of them. Upon hearing that, the first thing people ask is, where does Owen fall in the birth order? Because in understanding how to relate to someone with siblings, people innately know that birth order matters. (He's third born, by the way.) Our siblings are witness to our personal evolution, and evidence shows that our relationship with them shapes us, pivotally.

Frank Sulloway, an adjunct professor at UC Berkeley in the Department of Psychology, takes a Darwinian perspective on siblings: that people evolve within the family ecosystem to maximize survival by differentiating themselves. "From a Darwinian point of view, siblings are a threat to survival," he writes. "Negative emotions, including jealousy, are natural responses to this threat." It seems unfathomable in this day and age that a child's survival would be competitively based, but Sulloway says competition spikes when siblings are close in age because demands on parental investment are usually more intense under such circumstances. The rule at Owen's house, when a new baby was born (usually one to three years since the last), was, everyone watched the usurped baby of the family (the one closest in age). "You never knew what that kid would do," Owen smiles.

"This competition is all about parental investment," Sulloway tells me. "That includes food, shelter, and warmth, but also emotional investment. If you have everything you want, that won't eliminate sibling competition because you still need love and affection. In an evolutionary world, kids are always competing for whatever else they can get."

Sulloway's most significant finding is the important role that birth order plays in personality development. Parents have already invested more in a firstborn, he explains, by the time the next arrives, and that can become routine. Spending much of their childhood being bigger, stronger, and smarter than their younger siblings, firstborns are also generally more confident and successful. In an attempt to safeguard this natural favoritism, firstborns align themselves with their parents' traditional thinking. Innately realizing that they are already at a slight disadvantage, laterborns feel free to take more risks. Generally unconventional, they're the ones stacking the living room furniture to make a diving board as the firstborn runs to get you.

These personality niches are something most parents see everyday: Whatever one kid wants or likes, the other is bound to despise it. Sulloway's book, 26 years in the making, titled Born to Rebel, details this trend throughout history. Eighteen years later, continuing his research with Internet data sets of half a million people, the research still holds up.