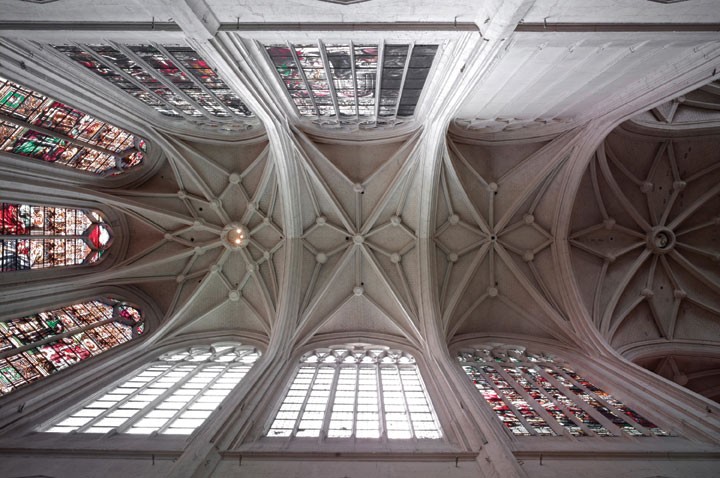 “Architecture doesn’t fit tidily into the pages of a book,” Andrew Tallon explains. That’s why he and his mentor Stephen Murray created the website MappingGothicFrance.org and launched an exhibition of the same name at the Loeb Art Center at Vassar College, which runs until May 20.

The website, which has been five years in development, considers French Gothic churches from numerous viewpoints, including the political. Maps of France reveal that the cathedrals asserted a new French nationalism. Tallon, an art professor at Vassar, speaks of cathedrals being “deployed” like chess pieces to guard the borders of the Capetian monarchy. “They were big French flags being waved across the borders,” he observes. Parallel to the churches was a ring of castles. The intersection of nationalism and religion is strange to us today. We don’t think of ourselves as “American Presbyterians,” just Presbyterians. But early nationalism shaped religious belief. (One example: Joan of Arc.) In the 13th century, God spoke with a French accent.

The exhibition at the Loeb Center is like a website come to life. The entrance to the museum becomes the ambulatory of a cathedral (the passageway behind the altar), complete with stained-glass window. Next, the alcove has been “painted” with projections of noted churches, using the high ceiling to mimic the vertiginous walls of a cathedral’s nave. Along the stairway are images of 500 years in the life of the Notre Dame Cathedral. On the rarely used mezzanine of the Loeb, high-tech exhibits allow the viewer to experience medieval architecture spatially. One stall employs 3-D glasses; an alcove hosts a spherical projection of Saint-Leu-D’Esserent, a cathedral in Picardy. Also on display are pieces from the original bequest that began the Vassar art collection in 1864, when Charles Magoon sold his personal artifacts to Matthew Vassar for $20,000. A rare volume from the Voyages Pittoresque series, published in 1829, employed the most up-to-date method for presenting architecture: the new art of lithography.

Gothic architecture began in the mid-12th century in Île-de-France, the region around Paris, spread swiftly throughout Europe and persisted until the Renaissance, in the 16th century. This style had not been dead long when its revival began—including at Vassar, where Taylor Hall is a fine example of neo-Gothic. (The term “Gothic” was only used later, to insult the style. Contemporaries called it “French architecture.”) Sadly, most of the original gargoyles crumbled, the victims of water damage. “The gargoyles that we know are more often than not 19th-century gargoyles,” Tallon remarks.

Cathedrals were the discotheques of their age—multimedia hallucinatory palaces. If you have ever attended mass in one, you’ve had the experience of hearing colored light. “Mapping Gothic Cathedrals” translates the mystical overkill of medieval architecture into modern technological wizardry.

Professor Tallon studies the structural secrets of Gothic buildings. He developed new techniques for viewing architecture with three-dimensional laser technology and robotic cameras. I asked Tallon why Gothic architecture is so beautiful. “These people were trying to build an image of the heavenly Jerusalem, which is an extraordinary idea. The Gothic builders had a way with space that allowed them to communicate this idea better than any previous architects—and, you may say, any subsequent architects. They were trying to do something that was technically impossible: to utterly void the walls. They didn’t want stone; they wanted huge fields of glowing glass.”

“Space, Time, and Narrative: Mapping Gothic France” will be at the Loeb Art Center of Vassar College in Poughkeepsie until May 20. (845) 437-5237; Fllac.vassar.edu/exhibitions; Mappinggothicfrance.org.