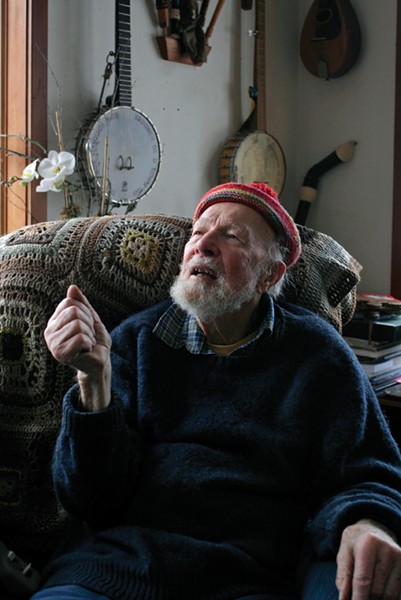 Pete Seeger has retired. Or, rather, that's been the plan. But, even at 91, it hasn't quite happened yet.

"Oh, I'd like to. But, well, look over there," he says, pointing to a low couch in the hand-built Beacon home he's shared with his wife, Toshi, and their family for over 60 years. Save for an open sitting spot at the far end, the couch, as well as the coffeetable directly in front of it, are thickly blanketed with sheets of mostly handwritten paper. "Letters," he drones, repeating the word a half dozen more times. "Every day, letters. I don't like to do it this way, but I have to use a form letter now to answer them all. There's just too many to keep up with. A woman comes in once a week to help me with them, Sarah Elisabeth. Her husband's a carpenter, works in the city. A good union man."

All of this—the unwavering sense of responsibility, the commitment to the rights of workers and individuals, and, above all else, the supreme value he places on human beings helping one another—is classic Pete Seeger. He's famously humble about all that he does in their name, but these are the core beliefs that have driven him to work so tirelessly in the areas of social justice and the environment.

And then, of course, there's his music. Even if you don't know who the man is, or about his devoted activism, odds are you know at least a couple of his tunes. Eternal anthems that sparked the fuses of Bob Dylan, Joan Baez, Peter, Paul and Mary, the Byrds, and basically the entire post-World War II folk revival and protest-song and folk-rock movements: "If I Had a Hammer," "Turn! Turn! Turn!," and "Where Have All the Flowers Gone?" and two he popularized, "We Shall Overcome" and "Little Boxes," to name a few. His adaptations of ethnic chestnuts like "Wimoweh" and "Tzena, Tzena, Tzena" helped forge the world-music scene. And though his voice is now frail with age, Seeger, today sitting in a chair between his two wall-hanging banjos famously inscribed "This machine surrounds hate and forces it to surrender," keeps right on singing. Eyes closed, he croons from deep memory the lines to old-time nuggets like "It Ain't Gonna Rain No More," the first song he ever learned.

"The clarity of the message in Pete Seeger's songs has always struck me," says Crooked Still banjoist Gregory Liszt, who toured with Bruce Springsteen for his 2006 homage, We Shall Overcome: The Seeger Sessions (Columbia Records). "All of his music is dedicated to deepening the connections between people, even if that theme is not explicitly mentioned in every song. Even in foreign countries where people hardly spoke any English, Pete's songs really got the crowd involved. Good music is always better if it really stands for something."

Seeger was born in the Putnam County town of Patterson in 1919 to ex-Julliard faculty members Charles and Constance Seeger, whose embrace of both music and political activism helped to shape their son early on. Charles, a noted musicologist and composer, served as a professor at the University of California at Berkeley until 1918, by which time his outspoken pacifism had made him somewhat of a pariah. Constance, a violinist and music teacher, encouraged Pete's interest in music by "leaving instruments—fiddles, squeezeboxes, marimbas—lying around the house for me to fool around with."

While young, Seeger discovered author and Boy Scouts of America founder Ernest Thompson Seton. "[Seton] boosted the idea of learning about the North American Indians," he explains. "I learned that they shared everything they had. There was no such thing as one person in the tribe going hungry and the others having full bellies. That seemed to me to be a sensible way to live. Anthropologists call that tribal communism. So I say that I've been a communist ever since I was seven, when I first started reading Seton." It was also when Seeger was seven that his parents divorced, his father remarrying to modernist composer Ruth Crawford and later taking a job as an adviser with Franklin D. Roosevelt's Farm Resettlement program. While traveling with his dad in 1936 he attended the Mountain Folk and Dance Festival in Asheville, North Carolina, where he first heard a five-string banjo. Fascinated, he plunged into learning to play it, eventually taking lessons in the clawhammer style from Kentucky master Rufus Crisp.

Seeger earned an academic scholarship to Harvard, where he performed folk songs for his fellow students and joined a wing of the Youth Communist League. These activities, along with a mounting disillusionment with hermetic academia, led to his grades suffering, and by 1938 he'd dropped out and gone on tour with the left-leaning Vagabond Puppeteers troupe. If from here it starts to sound like the mythical perfect storm that begat America's foremost folk icon, well, that's exactly what it is.