Shamanism in the Hudson Valley is Ancient Yet Current, Global Yet Very Much American 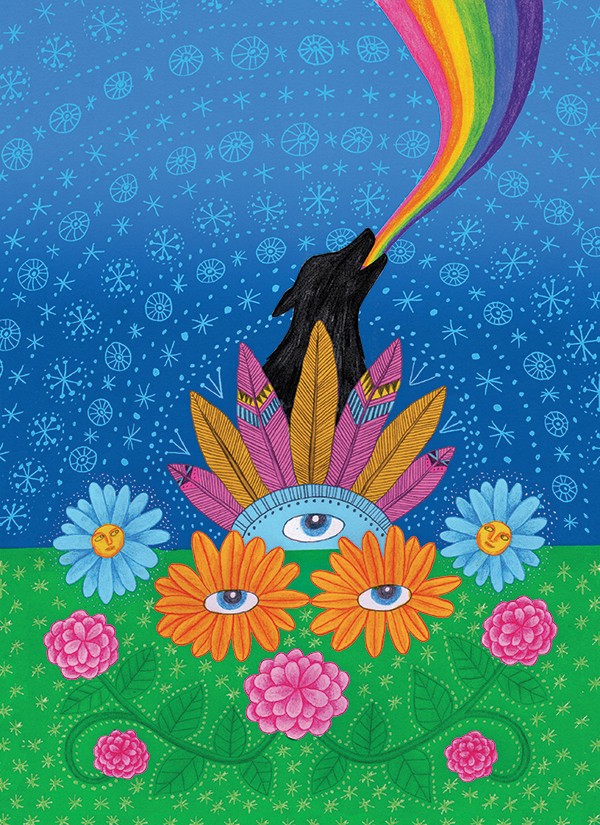 Lying on a padded table in Beacon, buried under a blanket and eye pillow, I'm about to journey back in time. The destination is my infant self. A little like deep therapy, it won't be an easy voyage—but I have an experienced cruise director. Shamanic practitioner Eileen O'Hare, dressed in flowing white garments, is by my side. "We believe shamanically that lots of stuff happened to us in the past, both in this and other lifetimes, and that energy is in our auric field and can get stuck," explains O'Hare gently about the psychic spelunking we are about to do. "Usually we find out that there's some shame or blame, anger, bitterness, jealousy, or resentment that got put in place by the things that happened. So we're looking to go to those little bits and pieces of ourselves that feel traumatized. We literally journey to the past and do healing there. We go to the place where the hurt happened, and we recover and reclaim the lost part of the person's soul." It's a delicate job, and even O'Hare needs a few helpers. In her room filled with amethysts, feathers, incense, and herb bundles, she tells me she has called in "all the beautiful ones—the entities and energies from Source Energy to fairies to mountain spirits to river spirits." I can't see these elemental beings—and my Western mind can't quite wrap its neurons around ideas like past lives—yet I enjoy the image of iridescent wings fanning the air and guiding us along. With Disney travel companions like these, what could go wrong?

A Hybrid Healing Art
What I'm experiencing on this early May afternoon is called a "soul retrieval"—one of several offerings from the vast field of shamanism, which draws from myriad diverse cultures worldwide. Both a healing art and a spiritual practice, shamanism is unique in that it is at once ancient in provenance yet utterly contemporary in its postmodern multiculturalism. Of course, indigenous shamanism still exists in various countries—but in America the practice is, like the nation, a melting pot, drawing upon a range of traditions from South American to Asian to Celtic to African. The word shaman comes from the Tungus of North-Central Asia and means "he (or she) who knows." Naturally, the field attracts fierce arguments about what makes a shamanic practitioner "authentic." (How can we compare a New Jersey born healer to an Ecuadorian shaman with the spirit of the jungle in his blood?) Yet Western versions of the art, bolstered by training and experience, have their own merit and offer a range of alternative applications in health care and psychology. Some practitioners, for example, use soul retrieval and other methods to help military veterans with PTSD and those who suffer from anxiety or depression.

In my session with O'Hare, I get a taste of the art's therapeutic power. The journey begins with a thorough Native American sage "smudging" (or energy clearing), with fragrant smoke guided from my heart to my feet to both hemispheres of my brain ("so you can lose your mind and come to your senses," O'Hare says). Poetic invocations stream from her mouth, as does song. In addition to her roles as shamanic practitioner, teacher, and ceremonialist (yes, she does weddings), O'Hare is also a vocalist and guitarist in the kirtan duo BlisSing, with Garrison songstress Cat Guthrie. Music and sound are part and parcel to her work, which touches on all the senses—not to mention the sixth sense. She "sees" things throughout the session, from angels to light frequencies, opening up new dimensions and calling in the state of altered consciousness that is a hallmark of shamanism. There are some bizarre and downright funny moments, like when she douses me in a South American rum-and-paolosanto cocktail called agua de florida ("I'm going to reek of alcohol!" I say to my laughing guide). But the beautiful moments outnumber the strange, and the potential payoff from this journey—a lighter spirit instead of a heavy one—is promising.

Treating the Whole Person
In most other regions of the United States besides California, shamanism's rituals and ceremonies might not get as warm a reception as they do in the alternative-minded Hudson Valley. Yet the field has seen a lot of growth in recent years, says Highland-based international shamanic teacher Tom Cowan. "It's becoming more popular because with shamanism we're talking about healing the whole person, not just the body. Modern medicine ignores the spirit, the soul. More people have come to realize that we need a more integrative and holistic approach." In his own work Cowan blends Celtic spirituality with the "core shamanism" that he studied with Michael Harner, the now-octogenarian anthropologist known for bringing shamanism to the Western world in the 1970s and 80s. After years of research, Harner found that despite shamanism's cultural diversity, certain core principles and practices were universal, including journeys to other worlds, a signature feature of shamanism. "Today we don't have a shamanic culture—we're cut off from our indigenous ancestors and traditions," says Cowan. "So we can look to the core practices instead and not have to worry about, well, what culture is this coming from, and am I allowed to practice that?" He spent time with a Cherokee shaman and with some shamans in Siberia, and he has studied African shamanism. "But I'm not Cherokee. I'm not a Shipibo. I don't practice those [traditions]; I use them to inspire me."