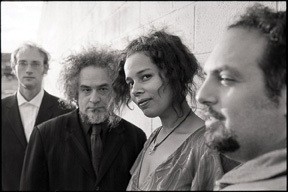 How many bands have someone who beatboxes over a celtic fiddle? Meet Sonic New York. Vocalist and fiddler Rhiannon Gidden (whose other band, Carolina Chocolate Drops, won the 2011 Traditional Folk Album of the Year Grammy) leads the quartet. But folk is a bashful abstraction of a genre for Sonic New York. Giddens, Adam Matta, Sxip Shirey, and Joseph “joebass” Dejarnette sharpen the funk of Stevie Wonder with the violin cries of an Irish reel. The band also draws on the experimental percussive accents of Radiohead and the Roots, the vocal sultriness of Ella Fitzgerald, and a touch of the tango tones of Astor Piazzolla. Saturday, October 15, 8pm at St. Paul’s Parish Hall in Red Hook. (845) 758-0151; www.studioredhook.com.