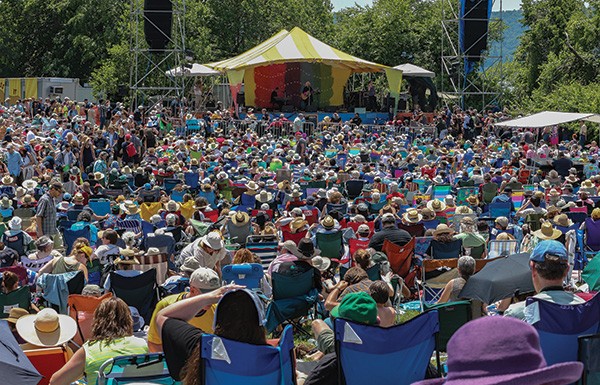 Here's to the new blood—and what sweet blood it is. This three-day, camper-friendly convergence makes its debut next month at Winston Farm in Saugerties (the site of the Woodstock '94 festival), bringing four stages plus a fifth live performance space, interactive art installations, carnival rides, a game center, and food and drinks. And check out this lineup: the Flaming Lips, Modest Mouse, Kendrick Lamar, Bassnectar, Moby, Dr. Dog, Big Gigantic, Nightmares on Wax, Cults, ST69, Flying Lotus, Marco Benevento Trio, Atmosphere, Matt & Kim, !!!, Excision, Holy Ghost, and too many more. Additionally, there will be special art installations and an arts and crafts bazaar. Hudsonmusicproject.com

Rightly touted as "a Who's Who of bluegrass in the Catskill Mountains," this long-running and always reliable hoedown relocated to Oak Hill a few years back and hasn't missed a beat, firmly retaining its mantle as one of the most popular roots music events in the Northeast. This year's bill boasts the reunited Nickel Creek, the Del McCoury Band, the Carolina Chocolate Drops, the Gibson Brothers, Tim O'Brien and Darrell Scott, Aoife O'Donovan, Claire Lynch, Della Mae, Balsam Range, Keller Williams with the Travelin' McCourys, and lots more to be announced. Camping, multiple stages, "jamming tents," raffles, and the Bluegrass Academy for Kids further make Grey Fox an absolute must. Greyfoxbluegrass.com.

Bang on a Can Summer Music Festival (July 26-August 2)

The storied and boldly adventurous festival dedicated to forward-looking contemporary music returns once again to the experimental environs of Mass MoCA in North Adams, Massachusetts. The revelatory artist program spans three weeks that include daily gallery recitals and focuses its last eight days in residence to present three major concerts with special guests that include composer Steve Reich, Wilco drummer Glenn Kotche, and Shara Worden of My Brightest Diamond, culminating finally with the six-hour, 50-plus-musician Bang on a Can Marathon performance. This year's marathon segment includes chamber music by Kotche and a new work by Reich that remixes Radiohead songs. Massmoca.org

You've got to love this imagery from the mission statement of this young (four years) but rapidly growing festival: "Visitors stroll from venue to venue enjoying the lovely stores and restaurants on [Phoenicia's] Main Street while breathing the pure mountain air, and listen to vocal music in its highest form in the heart of the Catskills." Styles stretch from opera to gospel, Baroque, sacred, choral, world music, Broadway, and new music; lectures and storytelling are also on the roster. This year has opera stars Brian Asawa, Aaron Blake, Kelli Butler, Maria Helena De Oliveira, Darik Knutsen, Toby Newman, Bradley Smoak, and Christopher Sokolowski, plus the Cambridge Chamber Singers performing music of the Spanish Renaissance and more. Phoeniciavoicefest.org

Founded in 1988, Falcon Ridge is the seasonal bookend to its likewise venerable and folk roots-oriented cousin, Grey Fox (see above). At Dodds Farm in Hillsdale, the multiple-stage gala offers camping and dozens of vendors, and has drawn upward of 15,000 during its traditional early August run. The main stage features headline acts and an all-star song-swap session, plus a yearly showcase series of 20 to 30 new or up-and-coming artists on the opening afternoon. 2014 performers include Tom Paxton, John Gorka, the Horse Flies, Aoife O'Donovan, the Boxcar Lilies, Christine Lavin and Don White, the Clayfoot Strutters, Cheryl Wheeler, the Grand Slambovians, Spuyten Dyvil, and others. Falconridgefolk.com

Another new entry to the festival fray is this intriguing all-day reggae round-up at Dairy Field in the rural Delaware County hamlet of Bloomville. Promoters promise a rundown of stylistic variants encompassing roots reggae, ska, rocksteady, mento, and lovers rock. Acts slated to appear include Sammy Dread, Ed Robinson, Junie Ranks, Michael Palmer, and Bombmob Electrodub, plus others to be announced. DJs Queen Tubby and Sir Walford will spin the rub-a-dub between live sets, and authentic Jamaican food—jerk meats, roasted yams and corn, coconut water, rum punch—will be on hand as well. As none other than Mr. Bob Marley himself was known to say, "Stir it up!" Dia-inc.com