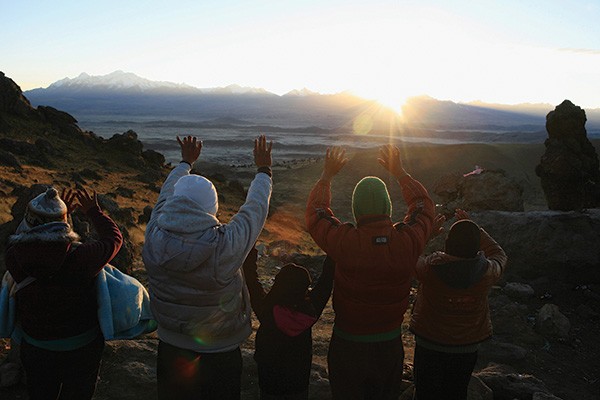 Early Christians knew exactly what they were doing when they chose a time right around the winter solstice as a day to wish a happy birthday to their god. The beginning of the lengthening of the light, in the face of the long cold stretch that lies ahead is probably humanity’s oldest and most instinctive occasion of celebration and ceremony, as evidenced by the architecture of places like Newgrange in Ireland and Maeshowe in Scotland, Neolithic creations that predate Stonehenge and are angled to capture the sun’s light at solstice with great precision.

The exact spiritual and/or social significance of this feature may not be known, but the instinct involved feels curiously familiar. Prehistoric folks were fully cognizant of just how much we all depend on the sun and of the challenge being faced in the long cold days. Late December, long before it was late December, was time to kill the fattened-up livestock and break out the fermented beverage. The sun was coming back, and the promise of that—the incremental brightening—would have to be enough to hold on to. If that weren’t enough, the Solstice also brings the longest night—an invitation to party down if ever there was.


Partying with Gusto Some of the ancients may have responded with what we moderns would consider unseemly gusto. In ancient Aegean society, the Festival of the Wild Women at mid-winter involved maenads (female followers of Dionysius), who drink themselves into an ecstatic state and sacrifice a goat—ripped apart and eaten—as a stand-in for Dionysius. Roman Saturnalia was an entire week of feasting and drinking and carrying on during which the masters served the servants and one “lucky” lowlife was christened the Lord of Misrule, indulged beyond his wildest dreams for the duration and, in some times and places, slain at the end.

Less notorious peoples skipped the blood sacrifice part, settling for ritual dances, bonfires, and feasts, often with some spiritual component. East Slavs in the 12th century made symbolic sacrifices of honey, bread, and cheese; brightly colored embroidery was also involved. In East Asia, the Extreme of Winter (Dongzhi) is a time for families to gather, contemplate the balance of yin and yang, and make and eat rice balls. Iranians have been wishing a joyous happy birthday to Mithra the Sun God for thousands of years on Shab-e Yalda, feasting on fruit; one associated tradition involves the elders telling stories to the young ’uns.

Many of the traditions that have been incorporated into standard-issue Christmas—such as Yule logs and decorating with evergreen—have roots in early solstice festivities. The desire to light up that longest night, remind yourself that spring will come, circle the wagons, and feed the crowd would seem to be universal, both embodying and transcending political correctness.

For us moderns, solstice can present the opportunity to host a gathering that transcends cultural traditions. Regardless of one’s religious background, the sun is the sun. Even for those who observe Hanukah, Christmas, or Kwanzaa, there is really nothing that says we can’t also celebrate the season’s turning. And there’s a built-in advantage to throwing a shindig on a night when most people aren’t auto-scheduled for family celebrations and/or obligations.

The Pagan-Christian Connection There’s also the delight of knowing that the most extreme authoritarian elements of society would, in fact, consider your party crazy and heretical if you bothered to tell them about it. Some think even the traditional Christmas far too risqué. The folks at Goodnewsaboutgod.com are emphatic: “God is very clear in his directives against the celebration of this Pagan holiday that Christians now universally celebrate as Christmas. God calls this an abomination! Christians who celebrate December 25 blindly believe they are honoring the birth of Jesus, when they are in reality honoring the Pagan god Tammuz.”

Plainly these are the spiritual descendants of Oliver Cromwell, who banned Christmas celebrations in England in the 1500s, and of the fifth-century Bishop Astarius of Amasea, who found all that fun just too much to take: “The common vagrants and the jugglers of the stage, dividing themselves into squads and hordes, hang about every house. The gates of public officials they besiege with especial persistence, actually shouting and clapping their hands until he that is beleaguered within, exhausted, throws out to them whatever money he has and even what is not his own.” Now there’s an idea. Seriously, though, nothing aggravates the forces of anti-fun more than lighting the lights and contemplating the unconquerable sun and the evergreen tree.

Solstice Traditions With all this in mind, how might moderns mark the solstice these days? The short answer is “however we darn well please,” but there are some traditions. Time your gathering around the sunset, so you and your companions can watch it together.

Decorate with greens-pine boughs, house plants, green tablecloth perhaps—accented with red and white. Add plenty of light; candles are a perennial favorite, small green or white strings of twinkling LEDs might also go well. If you’ve got a woodstove, fireplace, or fire pit, keep it blazing. Sparkling reflective touches that maximize the light are also fun—clearly, there’s a lot you can do with re-purposed (or pre-purposed) Christmas decorations, perhaps adding in found natural objects or whatever else inspires. Mistletoe as a symbol of love, friendship, and victory predates Christmas.

Food should be simple, hearty, and seasonal: winter veggies, soups and stews, and sweet baked goods are favored. Add a contrasting note with a fresh fruit dish. A pot luck is very much in the overall Solstice spirit, as are good ale, mulled wine, and cider.

If you want to inject a little nonsectarian gravitas, a spiritual tradition common to many cultures around this season is the forming of an intent for the coming year. This can make for lively discussion around the table or the fire. You can add just a touch of ritual by spending a few meditative moments in darkness, then having each person light a candle after they’ve stated their intention.

The Forces of Pleasure and Love For more than a touch of ritual, focus your experience by creating prayer sticks together with your guests and family. Traditional Native American ones, as described by Cait Johnson and Maura D. Shaw in Celebrating the Great Mother, are made of cedar the length of the maker’s forearm, carved in ways that have meaning for the maker, and adorned with a single feather.

The lovely thing about celebrating Solstice is how organic and universal it is. Have it your way—it’s the perfect occasion for gentle family fun, solemn contemplation, wild revelry, or all of the above. There is really only one Yule Rule, enunciated nicely by Waverly Fitzgerald on Schooloftheseasons.com: “You should enjoy yourself as much as possible on the Winter Solstice because this will bring back light (and lightness) into the world. Different traditions mention feasting, gambling, playing pranks, giving gifts, visiting, drinking, dressing up, fornicating, putting on plays, and staying up all night. During the dark of winter, invoke all the forces of pleasure and love which make life worth living.”