Where the Wilde Things Are: A Culinary Safari at Wilde Beest | Restaurants | Hudson Valley | Chronogram Magazine

Where the Wilde Things Are: A Culinary Safari at Wilde Beest

Uptown Kingston's newest restaurant is up and running

One of the most anticipated restaurant openings of the year happened last month when Wilde Beest debuted in mid-June. Located at 310 Wall Street in Uptown Kingston, chef Chris Turgeon has taken over the space formerly inhabited by the pioneering tapas joint Elephant. Turgeon and his tight-knit crew—Greg Ryan, Eric Donaldson, Russell Prickett, and Oshan Jarow—have big hooves to fill, but first bites suggest great things.

Chris Turgeon is an alum of 42 Grams, Jake Bickelhaupt's temple of cutting-edge modern cuisine in Chicago that served elaborate multi-course tasting menus and earned two Michelin stars before it closed in 2017. Given this pedigree, it's no surprise that Turgeon isn't just opening a "restaurant," he wants to wrestle with the very idea of what a restaurant is, or can be.
The menu—presented as a booklet, including illustrated covers—is ambitious, cheeky, and provocative. The names of the wildly inventive dishes, and their descriptions, give some indication of this. Pig in a Pullover: Savoy cabbage, ndjua, parsley crème fraiche, sumac, kale powder ($13); Tumble in the Rough: Twice spiced saddle of lamb, romanesco, sour cream, prune jus, nuts and grains ($31); A Trip to the Pond: Smoked barley risotto, morels, fava, peas, cattail shoots, wild mushrooms ($26); Hen of the Yard: chicken fricassee, carrots, cumin, rosemary, wild mushroom, jus ($24). 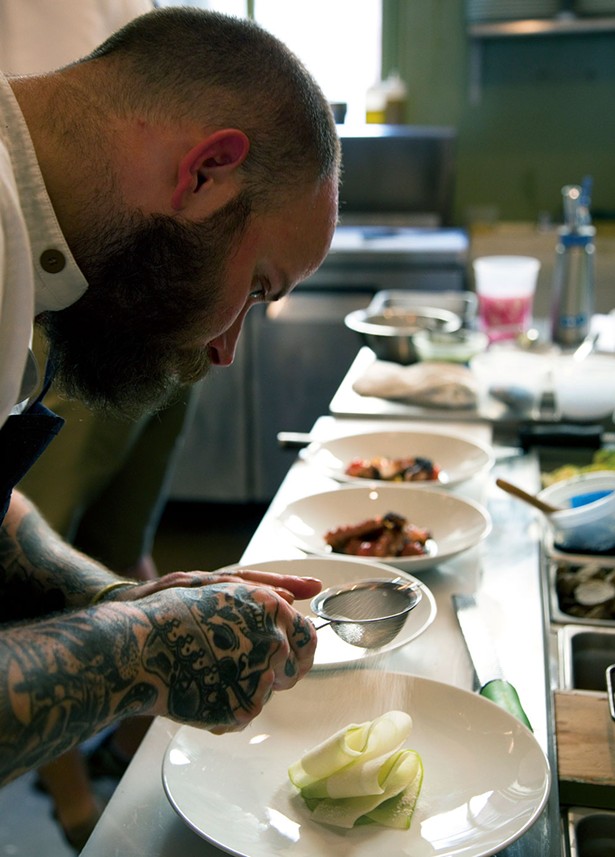 Turgeon has chosen to partner with farmer/cult hero Amy Hepworth, a seventh-generation farmer who runs Hepworth Farms on 400 acres that have been cultivated by her family since 1818. Hepworth will be providing much of the produce for Wilde Beest. Another aspect of "hyper-locality" that Turgeon is pursuing is on the house-made and preservation front. "I really want to cook the seasons," says Turgeon. There'll be a lot of canning and pickling, laying up food for the winter months. "I want to reference how people lived and cooked 100 years ago," he says. "If there's Worcestershire sauce on the menu, we'll have made that."

The interior of the restaurant has been transformed from a dark clubhouse to a bright, open, airy space somewhere between a modern art gallery and a kindergarten classroom designed by Walton Ford. The walls have been painted white, the black paint has been scraped off the front window, and the upper half of the partition separating the kitchen and dining room has been removed. These changes have brought a communal feel to the space that feels mellow and relaxed. However, the taxidermied ringtail pheasants in flight along one wall and Carla Rozman's slightly menacing paintings of animals provide dynamic counterpoint.

The menu is broken into Small Plates ($11-$14) and Large Plates ($24-$31) and there are six of each. I tried a high-concept salad, An Apple a Day ($11) consisting of shaved apple, kohlrabi, shattered cheddar, and dill creme fraiche, dusted with hazelnut and horseradish snow. The pairing here was subtle: the apple serving as a background flavor the others played off. Each bite was slightly different, depending on what bit of the dish you forked: now nutty, now creamy, now zingy with horseradish. (If you're wondering how to get to "shattered cheddar: just freeze it.)


Next up was Sea Legs ($15). This grilled octopus is the best I've eaten in many years. It was served with twice-cooked cherry tomatoes, paprika oil, squid ink, Iberico lardo and shishito puree. The octopus itself was an umami delight with a porcine quality that tasted delightfully meaty but not tough. Given my fondness for the octopus itself, the rest of the dish seemed superfluous, but the shishito puree added a piquant edge that suited the cephalopod well.

Strawberry Degrees ($12) is a fascinating combination of underripe green strawberries and almost overripe strawberries served with grilled cucumber and feta. The contrasting tartness and sweetness of the strawberry in two stages of ripeness is as disorienting and delightful as I imagine time travel would be. In A Pinch ($14) is a handful of blue crab topped with a fried tomato sitting in a lobster/saffron emulsion. The batter coating on the tomato was as thin, light, and ethereal. The temperature difference between the cold crab and the fried tomato was a wonderful surprise. This dish embodies something essential about Turgeon's cooking. All the food I've eaten at Wilde Beest has tasted "good." The same could be said of the top dozen or so restaurants in the region. What elevates Turgeon's plates is his intellectual curiosity, inventive nature, and love of contrast.

I also tried Never Mind the Bullocks ($31): sliced strips of Akahushi beef served with red radish fluid gel, compressed broccoli leaf, cured beef heart, and double Worcestershire. Akahushi is a Japanese breed of cattle with intense marbling, which was clear from the cross-cut presentation. The radish gel is a bit of gimmicky molecular gastronomy, but looks great on the plate, three pale red gumdrops in a neat row. (Turgeon is finicky about the way his food looks and the presentations of all the plates showed German-enginnering-level precision. One senses the clear influence of 42 Grams's Bickelhaupt, a noted stickler for detail and tortured genius. Turgeon, who is often seen bringing plates directly to diners, may be a perfectionist, but he's an affable conversationalist tableside.) The meat was as lush as you'd expect waygu beef to be and the double Worcestershire an appropriate gooey, fishy accompaniment—a tweaked version of a quintessential American dish.

For dessert, I was served a sundae (Not Bad for a Dollar, $9): mascarpone ice cream, salted caramel, red Spanish peanut, and marshmallow fluff that was formed in a ball and charred. Think of it as a deconstructed Milky Way candy bar crossed with a Fluffernutter sandwich. The focus here was as much on texture as it was on richness. A silky, sweet treat to end the meal. 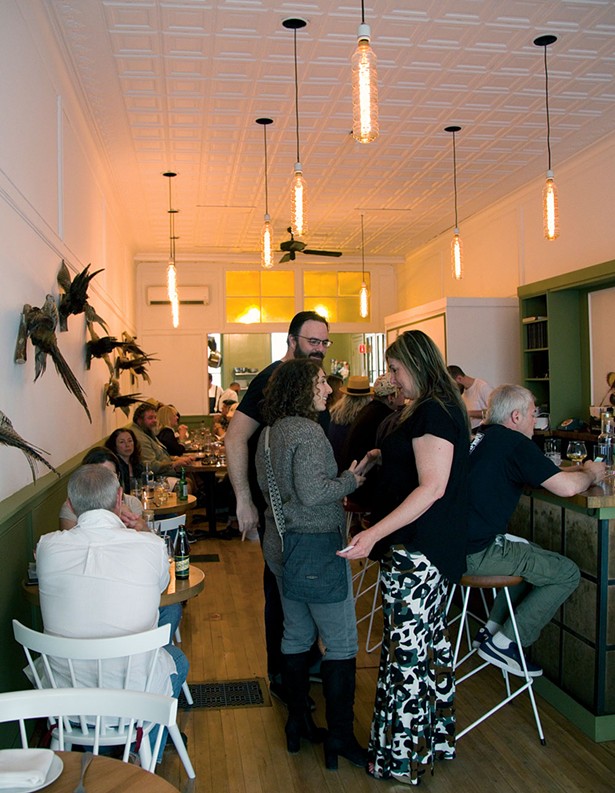 Like its predecessor, Wilde Beest does not serve hard liquor, only beer and wine. The wine list ranges all over the map, with a Lebanese Syrah rubbing elbows with Californian Grenache. Bottle prices $35 to $150; glasses $9 to $14. An exceptional pour I enjoyed was the Enrico Serafino Gavi di Gavi, an Italian white that paired wonderfully with the apple salad and grilled octopus. There are also some world-class beers available by the bottle, including a 750 ml. Figaro Ale from Oregon's Cascade Brewing Company ($38).

Given what I've eaten, I'm expecting great things from Chris Turgeon and crew. Wilde Beest is what the next wave of adventurous cooking in the Hudson Valley tastes like.

Wilde Beeste is open for dinner Wednesday through Saturday, 5–10pm, and for brunch on Saturday and Sunday from 11am–3pm. Wilde-beest.com