Small Is Beautiful: Kevin Kuenster and Other Small Works at Limner Gallery 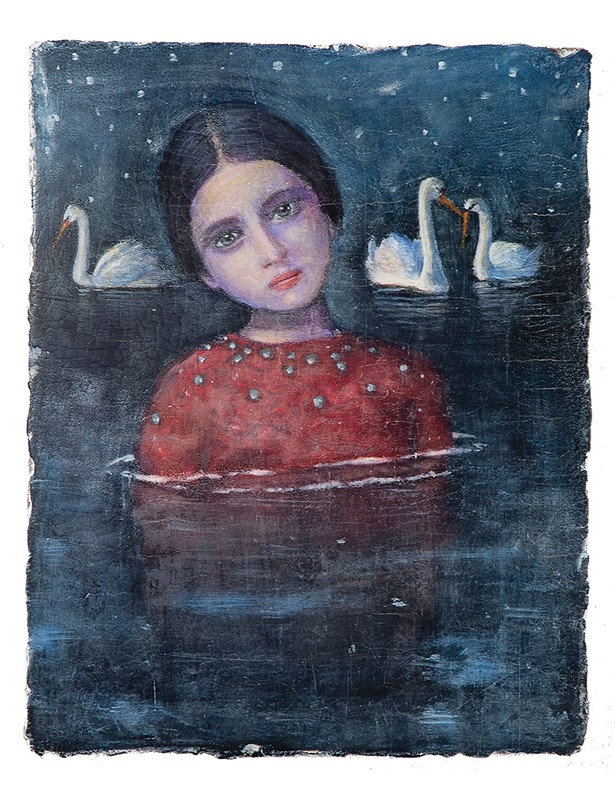 Two of the most memorable paintings are by Red Hook artist Kevin Kuenster; both are titled Terra Erit Nobis Retro; The Earth Will Have Us Back. Each is an image of a child standing in high water. #1 depicts a boy being harried by four white doves. #2 shows a girl accompanied by three swans.

Both pieces were created using the buon fresco method—a layer of thick plaster, then two coats of aged lime putty mixed with marble dust—on wood panels. "It's an unforgiving medium, like watercolors, where you can't take anything away—you can only add," Kuenster observes. He has just five hours to paint each fresco, before the plaster hardens.

Kuenster's version of the fresco brings the venerable process into the 21st century. He first works out his composition on a computer, reverses it, print its out, and the lays the image face down on the plaster surface. When the printout is removed, traces of the picture remain for Kuenster to use as guidelines.

I did a double take after seeing the paintings the first time; I'd missed the political subtext until I read the titles. Young people standing in rising water, who aren't dressed for swimming—the face of the girl in #2 is reminiscent of Greta Thunberg, the 16-year-old Swedish activist who has come to symbolize the struggle against global warming.

Eyes are central in Kuenster's art. They contain entreaty, fear, but also a wordless confession. "Very often in Renaissance painting there's a character staring at the viewer," Kuenster observes. "I am always drawn to art that has that element."

In his spare time, Kuenster is a climate activist. All of the proceeds from his paintings at Limner will go to Extinction Rebellion, a direct-action group pushing governments to take action on climate change.

Kuenster has been working in fresco since 2017. He stumbled upon the process while substitute teaching his son's art class. Using a simplified method with plaster of Paris, the artist introduced the students to fresco. The piece he made as a sample was so pleasurable, he continued toying with the technique.

The earliest frescoes date from Egypt's Fourth Dynasty circa 2,500 BCE. The long history of this artform has its own message: Successive civilizations have risen and collapsed, each convinced of its mandate from the gods. Greater cultures than ours have fallen victim to greed and egotism.