The Shape of Exile 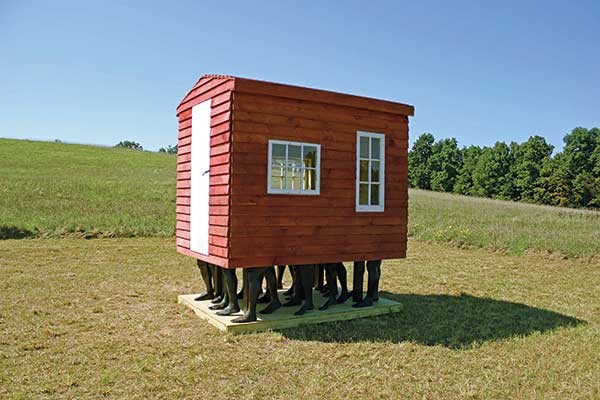 When's the last time you thought about art and architecture in Cuba? If it was recently, probably crumbling Colonial buildings painted in pastel colors come to mind. Certainly, politics has made going to Cuba and even knowing about the country quite difficult, so it's hard to fathom what architecture and art there looks like, and that's really a bit of a loss. Happily, the show "Skyline Adrift: Cuban Art and Architecture" at Omi International Arts Center in Ghent has just what you need. 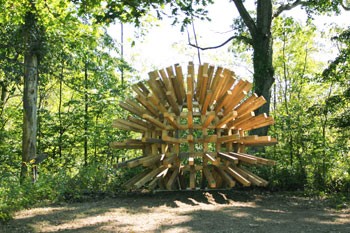 Set among the 60 acres of rolling pasture of the Fields Sculpture Park, "Skyline Adrift" features four outdoor installations by four Cuban nationals—two architects from Havana, two internationally known visual artists—that constitute a show that wants to push the concept of architecture as art, that nonfunctionality can be poetry, that constructed structures can melt into what we now consider art, in Cuba as elsewhere. It succeeds in its conceptual conceit; it falters in trying to flesh out that conceit with immediately pressing issues.

The two Havana-based architects riff on functional spaces but the work reads as a bit uninterested in letting out its secrets. Yoandy Rizzo Fiallo's Nest, an outward-radiating wooden cagelike structure, notably featuring 8,000 screws, points to something essential about Cuba's founding. Why 8,000 screws? Why not 9,085 screws? The work refuses to answer those questions, to its strength. Walk up the hill from the architectural installations and to your right you'll find the strongest piece in the show, Armando Marino Calzado's Exiled. It's a small, transportable cabin, painted red and perched atop two dozen brown legs—like it was physically supported by slave labor. Inching close to a large-scale Doh Ho Suh installation, it offers the show's most direct argument that America and Cuba have more in common than crosscutting politics would suggest. 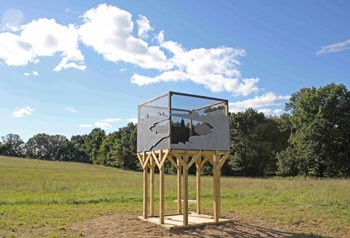 Climb farther up that lovely hill straight out of Wyeth's Christina's World and you'll find Alexandre Arrechea's totemic Door in the Desert. It plays on what looks like midcentury aviation design and suggests that we'll have settled our disputes across the Gulf of Mexico when we can all fly to Cuba and back. The piece is more interesting than its press release photo suggested. When I visited, there was an old Schwinn bike locked around it. Was the bike a part of the piece or an unwanted, unforeseen intervention? 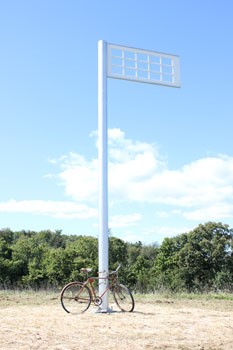 Even though the show proposes to deal with contemporary politico-sociological issues in Cuba, I wish it offered more political meat. For if we in America settle down with work about Cuba that speaks only to construction (of identity, of history) and migration, are we not talking about a rather traditional, Miami-centric, view of Cuba? Should we not want work that speaks to the ways we trade political liberty for other guarantees—of food and education there, of consumption and student loans here; that Cuba has one currency for Westerners and another for its own people? After all, in America, artwork about Cuba, like talk about Cuba, has political implications that may not go down easily.

"Skyline Adrift: Cuban Art and Architecture" will be exhibited through May 1 at Omi International Arts Center in Ghent.