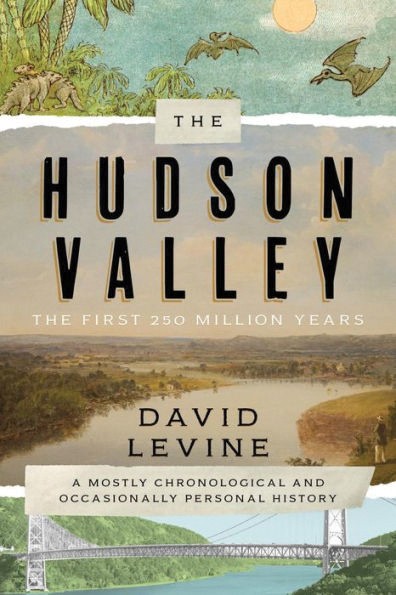 Anywhere you go around here, you're standing on the site of four centuries of recorded human drama. The Hudson River provided explorers with a navigable pathway into the North American continent early on. And it doesn't take written records to know that the river was just as important to people living here in the 10 millennia or so before that.

But how was it shaped? That's David Levine's starting point in The Hudson Valley: The First 2.5 Million Years, and it puts things nicely in perspective after the abbreviated and often Eurocentric history most of us were taught in school. The time frame includes the river itself as a player with a story, surely the least it deserves after all these years of feeding and carrying folks. The Hudson River School artists, after all, reaped a bounty bequeathed from the Ice Age.

Levine has written a regular history column for Hudson Valley magazine since 2010. In his introduction, Levine notes that despite 30 years as an Albany resident, much of what he found out in that role was new to him. His fresh eye sheds light on fascinating characters familiar and obscure: Benedict Arnold, Sojourner Truth, Matthew Vassar, the mansion-building tycoons, the mad scientists of Tuxedo Park, the ironworkers of Warwick, the violet growers of Rhinebeck, and the Quakers of the Oblong, among many others.

In "The People of the Waters That Are Never Still," the first chapter in which humans take the stage, Levine digs deep into what is known of the Mohican and Lenape, drawing on early 17th-century sources and the archaeology of SUNY New Paltz Professor Joseph Diamond to paint a much more detailed picture than we usually get of how the previous inhabitants lived their lives. And Levine sticks the landing: He tracks down living members of the Stockbridge-Munsee Mohican nation out in Wisconsin and finds out how they're doing now. This chapter alone is worth the price of admission.

But there's loads more. Levine is not a historian, and he had the common sense to go straight to the local experts and let them rock'n'roll on the topics they know best, getting the reflections of those who've done the deep dives and pondered the results. Local and institutional historians have access to lots of fascinating detail, and they (and Levine) love to reflect on the quirky bits, the ironies, the likely motivations.

This is an ambitious and well-realized work; if one might wish for a chapter on, say, Father Divine or the Clearwater or Peekskill's racial struggles, it's only because one would like to hear Levine's take. His clarity and sense of humor make this book a treasure chest that belongs on all our bookshelves if we wish to know what these hills and shores remember. It would be hard to get closer unless they themselves could talk.

Levine will read at Oblong Books in Rhinebeck on Tuesday, February 11 at 6 pm and Golden Notebook in Woodstock on March 14 at 4:30 pm.

Live Sustainably Now: A Low-Carbon Vision of the Good Life

Rockland County resident Karl Coplan, director of the environmental litigation clinic at the Elisabeth Haub School of Law at Pace University, chronicles his year of suburban middle class living on a carbon budget and makes the case that the sustainable life can still be a comfortable and satisfying life. Sharing his adventures in kayaking to work, driving electric, and eating Mediterranean-style, Coplan demystifies the measurement of one's own carbon footprint and how to set a personal carbon cap, and outlines the climate consequences of various energy, lifestyle, and transportation choices to help readers create their own blueprints for sustainable-yet-fulfilling lives.

Novelist, screenwriter, actor, and director John Sayles, a Dutchess County resident whose 1978 Union Dues was a National Book Award nominee, reads from his latest work on February 3 at Oblong Books in Rhinebeck. Yellow Earth, set on the banks of the Missouri River in North Dakota in the time just before the Standing Rock struggle hit the headlines, contemplates the impact of a shale oil discovery on Three Nations land. Sayles's protagonist, Tribal Business Manager Harleigh Kildeer, is the man who must balance the advantages and disadvantages of the Three Nations Petroleum Company and the competing worlds in play.

Dutchess County resident Jenny Offill, author of the national bestseller Dept. of Speculation, ponders the questions that crop up when our currently polarized public discourse spills over and impacts private life. Lizzie Benson is working as a librarian and enjoying her avocation as a "fake shrink," just catching her breath between issues with her "God-haunted" mother and a brother in recovery, when she's offered what sounds like the perfect job: answering the voluminous mail her old mentor receives as creator of a podcast called "Hell and High Water." Offill reads on February 27 at Murray's in Tivoli. 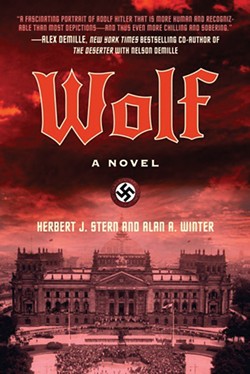 What if you'd met Hitler in 1918 as a fellow mental patient who needed a friend? When he was still a lowly corporal, a diagnosed psychopath who called himself Wolf and suffered from hysterical blindness? What if you had known him through his transformation from unassuming so-so painter to fascist megalomaniac? Stern and Winter, both attorneys by trade, have created soldier Friedrich Richard, an observer, sometime friend and protector, for their "realistic portrait of the evolving Hitler." Among doings, people, and places taken from fresh, precise historical research, Stern and Winter read at the Golden Notebook in Woodstock on February 15.

Woodstock town historian Richard Heppner, author of three books of local history, turns his attention to the racial dynamics of 1905. Oscar Harrison, 23-year-old son of a reservoir superintendent, was found dead from blunt force trauma in the home of "colored man" Cornelius Van Gasbeek, and hasty assumptions were made. Augustus H. Van Buren, Esq., a Woodstocker with a conscience stronger than his regard for popular opinion, fought the case, pro bono, through three years and multiple trials. Not as tidy as To Kill a Mockingbird, Heppner warns us going in, but a snapshot of a community in transition.