Silvia in Woodstock: A Gathering Place 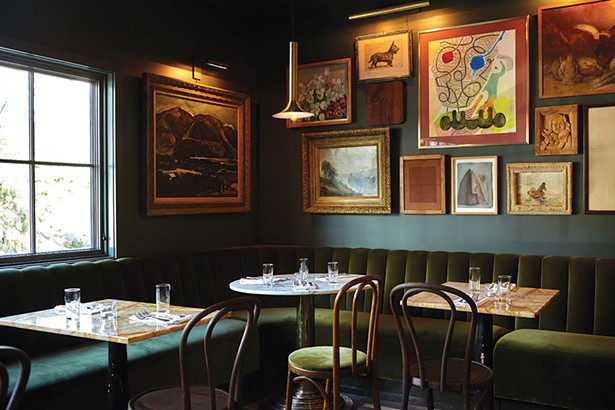 In the 1970s, the Joyous Lake was the hottest music club north of New York City, hosting everyone from the Rolling Stones to Muddy Waters and serving as the social hub of Woodstock. After a long dormant period, the iconic building on Mill Hill Road was renovated and reimagined in 2017 as Silvia, an unpretentious restaurant with serious food and sophisticated-yet-rustic design. In its first 18 months, Silvia has become an integral part of the community, a place where visitors and locals can gather for celebrations both large (holiday parties) and small (romantic dinners).

Silvia's menu can be described as hyperlocal new-American food with global inspirations and an emphasis on Korean and other Asian influences. "Some of our most popular items are our Korean bibimbap, sustainable seafood bouillabaisse, and the ash-roasted squash that we cook in the hot ash from our wood-burning grill," says chef Doris Choi, whose dishes embody a lightness of touch that leave diners feeling sated but not stuffed. Midweek specials are an additional draw: Tuesday is (grass-fed and -finished) burger night ($14); Wednesday is fish and chips night ($15); and Thursday is dollar oyster night.

A heady but approachable wine list leans toward natural wines, pairing Silvia's ingredient-forward philosophy with estates that strive to express terroir. The cocktail program is also on point, featuring twists on the classics, like the Lemon Thyme Corpse Reviver #2. Eight craft beers rotate on draft, many from local breweries like West Kill and Arrowood Farms.

Approachable, smart, and versatile, Silvia is the new home for destination dining in Woodstock.

Dinner is served nightly from 5 to 10pm.