Show Me the Funny 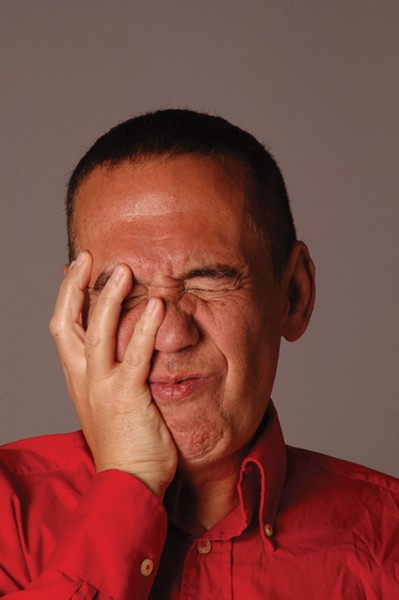 Does comedian Gilbert Gottfried have a Justin Bieber chest tattoo? Or did he take the stage after Jimi Hendrix at the 1969 Woodstock music festival?

Although these questions may be dubious, it is true that Gottfried will headline this year's Woodstock Comedy Festival on Saturday, September 24 at the Bearsville Theater. The show starts at 8pm. Eddie Brill, who was the audience warm-up comedian and stand-up comedy talent coordinator on the "Late Show with David Letterman," will open for Gottfried.

The festival, which runs from September 23-25, includes stand-up and sketch comedy, panels, improv, and films.

In its fourth year, the Woodstock Comedy Festival helps survivors of domestic violence and human trafficking by donating its net profits to two charities, Family of Woodstock and Polaris.

Gottfried spoke to Chronogram about the Hudson Valley, being a 21st-century comedian, political correctness, headlining the festival, and why he hopes "the check clears." Woodstockcomedyfestival.org.

Do you have memories of the Hudson Valley, or Woodstock in particular?

No. Except for when I performed after Jimi Hendrix. I didn't attend Woodstock [the concert]. I could not imagine why anyone would have gone there. Three days of mud, and no toilets, and no food. I can't imagine anyone, for the life of me, wanting to do that to themselves.

This is your area debut, is that right?

I guess so. I think I would have remembered if it was Woodstock. But I'm also one of those people who, I could have played there last night and forgotten about it. There are clubs that I swear I've never been to, then I go there and I see that I've signed their wall. So, I never know.

Any thoughts about your Hudson Valley debut, or potential debut?

I hope the check clears.

What was the initial spark that led you into comedy?

I was a kid and I started watching loads of TV. And I started imitating people I'd seen on TV. I just started getting interested in it. And then someone told my sister about some club where you could go and sign your name down and just go on and perform, and I did that at 15. I went (on) my pilgrimage from Brooklyn to this club in Manhattan and went on. I don't remember if I did well, or if I was too stupid to know I did badly. That's how it really started.

Do you remember what you felt at that time? Were you nervous?

It was a weird thing because once again the stupidity goes into play. I feel like what got me to feel like I could make it in show business, and what got me to continue, was just being that dumb; not knowing the odds, not knowing the reality of the situation. As you get older you get more common sense. Nowadays I think: "No. That's insane to think you could just go into show business and make it."

You have a successful podcast ["Gilbert Gottfried's Amazing Colossal Podcast"] and have read 50 Shades of Grey for CollegeHumor.com. What role does technology play for comedians, up and coming?

I seriously feel like the second I had a vague understanding of how show business worked, it all changed. And then it continued changing. I vaguely figured it out. There were movies and there was TV. But now it's like I have no idea. If you ask me who a star is I'll go like Tom Cruise and Julia Roberts. And that, I think, is kind of old-fashioned because now a star is some guy on the Internet who squeezes his blackheads. And if you book him somewhere he could fill an arena. So I'm really backward on it.

What role does political correctness have in comedy?

Oh God. Well, I've certainly experienced it. It's very peculiar because I think the Internet makes me feel sentimental about old-time lynch mobs. I feel like old-time lynch mobs actually had to put their boots on, go outside, get their hands dirty, and deal with other people. And nowadays you sit in your underwear on the couch and type together a lynch mob. It's become the new, Space Age way of ringing someone's doorbell and running away.

People love getting offended and love getting outraged. And it's a way of feeling better about themselves. Like if some horrible tragedy happens you can actually fly to where it happened and help out, or donate money, or you can get offended by what someone said about it and then you feel like "Oh, I'll pat myself on the back and I'm a good person now."

Do you think comedy is a safe zone that should be exempt from PC guardians?

Absolutely. I remember when Michael Richards [of "Seinfeld"] got in trouble. And the owner of the club announced that anyone who uses the N-word on stage will be fined. I thought, wouldn't it make more sense to advertise that we don't censor anything that goes up on stage? And it might offend you. It might get you angry. I think that would entice people more to go to a club. To me, it's like when you try to clean up stuff like that and make it acceptable it'd be like advertising: "On our roller coaster, as opposed to other roller coasters, you don't feel like you could die or get hurt. Our roller coaster goes very slowly and it never makes any sharp turns." I think people want that. People want to go to an amusement park and feel like their life is in danger.

Is there anything about you most people don't know? Do you like heavy metal or have tattoos?

I have a giant full-size tattoo of Justin Bieber on my chest. At the time it seemed like a good idea.

Why should people come to the Woodstock Comedy Festival and see your show?

I think they should come because I've got some bills to pay. And I'm not concerned whether they like it or not, just as long as they pay.