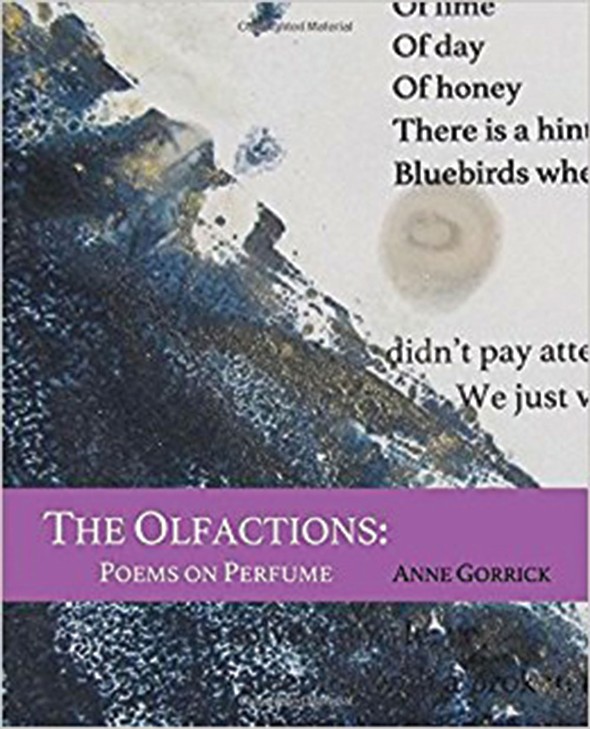 The Olfactions: Poems on Perfume

Anne Gorrick's new book, The Olfactions: Poems on Perfume, presents a startling reversal of the hierarchy of the senses, where sight and sound are almost clouded out by the prominence of smell. As memory and desire loosely commingle, Gorrick's bouquet of descriptors include "a rosemary explanation," "Flat lilac," "pina colada smelling," "a strong note of zinc oxide," an "ozonic note," "seaweed," "neroli," and "oudh." From a paean to Coppertone called "Summer Former without Being Gorgeous": "Recuse yourself from a beach / Scent glues itself to an entire summer / the air fluted with Coppertone." Even ice, which takes on an epic role in one of Gorrick's iterative and typically long poems, has an odorous dimension: "The fragrant dells found in ice." Replete with Duchampian experiments (such as lines culled from Google's auto-suggestions), these works engage subtle realms of awareness: "This poem may have formed from / a self-luminous sphere of gas."

Won't Be Long: Poems Short, Poems Shorter, Poems Shortest by J. R. Solonche makes the case that poems, even the shortest ones, are necessary. His observations are sparked at the place where knowledge and wonder brush together. For this poet, a single stanza can be sufficient to break open the sky. The poem "March 14th" is as compact and weighty as a teaspoon of particles in a black hole: "Today is Einstein's birthday, the sun is shining." His poems sometimes teeter on tautology, "The rain off / the duck's back / was like water off / a duck's back," or careen toward aphorism via minute semantic shifts: "So far humans / have not / come so far." The poem "Politics" gives no hint or anticipation of the current cataclysm, offering only a single proposition: "All poetry is local."

The irony in the title of SUNY Adirondack professor Kathleen McCoy's new book, Green and Burning, evokes the possibility, both unexpected and gleaming, of renewal. From "The River Marriage": "The river, thick with liquid mud, / brightens in one-o'clock sun." // "Rife with trout and glistening, / this river's had many names." Patterns of coupledom are illuminated, "You nap while I paddle / and then my turn will come." These paddlers could be weekend tourists, or indigenous people, or the former dreaming of the latter. Ceremony, the lure of fire, and roots that twine us to the natural world are preoccupations for this poet. From "To Be": "Birch reaching for the red-tailed hawk / Oak reaching for earth's hot core."

The intersection of social upheaval, Machine-Age whimsy, and incomparable artistic achievement makes 19th-century Paris a perennial source of fascination. The poems in Jay Rogoff's Enamel Eyes: A Fantasia of Paris, 1870 focus on the City of Light while it was under siege by the Prussians, during a war where Degas and Manet were artillerymen. The poet, who is also a dance critic and Skidmore professor, has taken as his subject the comic ballet "Coppélia" (the hit of the 1870 season), which riffs on the seductive potency of a mechanical girl. The production's young star perished that same year from wartime privations. "The Paris Diet" illustrates the famine with a light touch: "Ingres-smooth steaks (dark donkey flesh) / gleam behind glass, fine bloody art...Paris crawls on, ravenous / as Géricault's Raft sprung to life."