In 1897, Downing Park opened in Newburgh. The final collaboration between landscape architects Frederick Law Olmstead and Calvert Vaux, who had designed Central Park some years earlier. Vaux and Olmsted were well known for creating naturalistic, rustic, and curving landscape designs. The park's 35 acres were designed to be a contemplative environment in the center of the city, place for "the unbending of one's faculties." The park was named for Olmstead and Vaux's mentor, Andrew Jackson Downing, a native son of Newburgh.

The park served for decades as a center of civic life in Newburgh, complete with an observatory at the top of the park (while the building is gone, the beautiful views of the Hudson River and Bannerman Island are still intact), a dramatic pergola. In the 1930s, the Lions Club funded the building of a stone shelter house next to the pond, where skaters could warm up off the ice and drink hot cocoa. (The park even hosted the Northeast speed skating championships in the 1940s on its Polly Pond.)The federal government's urban renewal programs brought a host of problems to small cities in the Sixties, Newburgh among them, and Downing Park fell into disuse and the shelter house was abandoned.

The Downing Park Planning Committee, formed in 1987, is a grassroots community group looking to restore the park to its former glory. The group, in coordination with the City of Newburgh, has raised over $300,000 to rehab the park, including renovating the Shelter House. Stephen Sinnott, a volunteer at the park and a carpenter by trade, became intrigued by a question: With all the improvements being made to the park, what will help it cohere as a community space? His answer? Food. Sinnott sought approval from the city to run a concession in the park, upgraded the interior of the building, the Shelter House Cafe was born.

"A core problem was that the park was unoccupied. It was susceptible to vandalism, dumping, prostitution, drugs—a perfect recipe in an unoccupied area that," says Sinnott. "We decided as an approach to bring the park back and make it a destination, the best thing was to provide a concession and give the families a reason to come in, and have more of presence in the park." 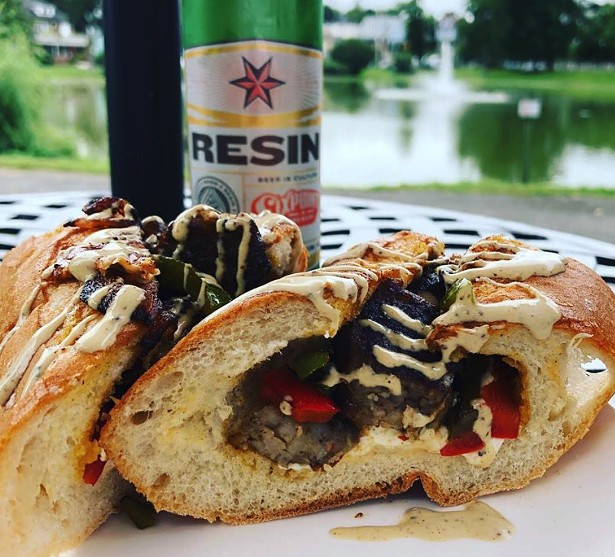 The Shelter House Cafe, opened this summer, is open for breakfast and lunch, and extends its hours till 7pm on weekends. A good bet are the appropriately named signature egg sandwiches. Try the veg-friendly Vaux ($8): spinach, mushroom, egg and cheese on a toasted brioche roll; or perhaps the spicy Olmstead ($8): chorizo, brie, jalapeno, and egg on a toasted brioche roll. Breakfast entrees include Spanish-style tortilla ($7), buttermilk pancakes ($8), and avocado toast ($11). 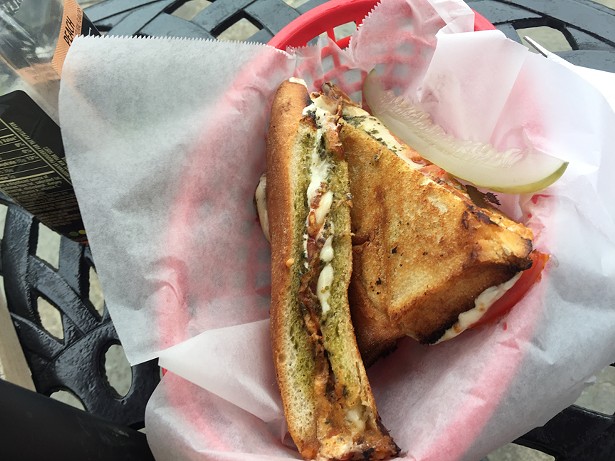 Sandwiches include the pulled pork Carpenter Ave ($8), the fried chicken on a roll Third Ave. There's a Cobb salad ($14), a daily vegan soup, and an assortment of snacks under $3: hot dogs, onion rings, French fries, and soft pretzels. There's also a small selection of beer and wine.

When you go to the Shelter House Cafe, go on a temperate day, or bundle up, and sit outside on the stone patio by the pond and wonder at the marvel that is Downing Park.

A Plant Concert in a Newburgh Ruin