Securing The Iraqi Homeland: The Differing Faces Of Security 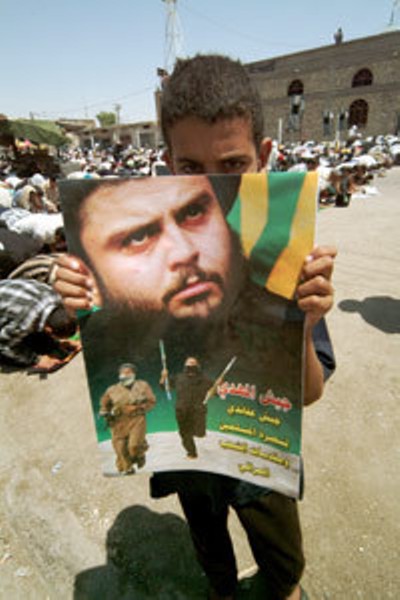 Lorna Tychostup A young boy holds a poster of Moqtada Al-Sadr, who has become the symbol of Iraq's Rebellion against the American Occupation.

Lorna Tychostup Under a blazing sun in 130 degree heat, over 10,000 Shi'ite heed the call to friday prayers and carpet the street in Sadr City.

Lorna Tychostup Sumer Security Trainees, many of whom have had experience in the military, run through a series of rigorous exercises as part of their required two-week training course.

Lorna Tychostup Judge Zuhair Al-Maliky: "It is the government's responsibility to provide homes to homeless iraqis who suffered 35 years of tyranny and not to political parties."
From Friday prayers with the Mahdi army in Sadr City, to the fortified compound of Sumer International Security, to the squatters' camp outside Uday Hussein's former stable club, to the chambers of Judge Zuhair al-Maliky - a portrait of the new Iraq.

I am not sure if it's my imagination or not, but the times I don a hijab I do not seem to feel the heat as much as when I am without it.  The hijab is made of two parts, the first is similar to a neck warmer and is made out of black cotton much like tee shirt material.  I slip it over my head to my neck, pin my hair up, and then pull its five-inch length up onto my head as if it is a headband.  It covers much of my forehead and acts to hold in my hair.  In some places, like Sadr City, it is said the young male children will hit a woman if even a strand of hair is showing.  Next I put on the scarf, checking to see that each of the two ends in front are even in length before pinning it tightly beneath my neck.  This particular day, I am wearing a long brown skirt and one of my long sleeve Iraqi-wear shirts buttoned high on the neck.  I turn to my interpreter, Amal, who is wearing a black abaya she calls "a garbage bag" and ask if I look Iraqi.  She laughs, adjusts my hijab by pulling it down further over my forehead, and says, "You look fine."  Then she whispers, "Are you terrified yet?"

It is a joke between us, instigated by the repetitive comments of an American playwright we met in Baghdad last February who we both still keep in touch with.  Each time either of us speaks with him, he asks, "Are you OK?"  with a tone in his voice as if mortars are crashing around us at every moment.  Amal began the joke after one too many of these "are you OKs?"  In Baghdad it becomes a ridiculous statement as one goes about the activities of daily life.  Each time Amal and I ask each other, "Are you terrified yet?"  we laugh.  If there is any tension it melts.  But most of the time we say it as a blatant joke, to point out just how safe we feel as we walk through the crowds of Karrada Street in the evening hours, perusing the many goods for sale and stopping to eat dinner in an open air cafe.

When she says it to me this time, I laugh.  There is plenty of tension to release.  Amal, a journalist friend, David Enders, and I are going to Friday prayers in Sadr City and besides being unhappy about having to wear the hijab in this heat - it has been averaging 130 degrees - I don't know what to expect.  The media reports have painted a picture of a Wild West sort of town, where Mahdi militiamen walk the streets dressed in black, openly brandishing Kalasnikovs.

Our taxi takes us out of Baghdad to the dusty streets of Sadr City.  The driver stops to ask directions and before long we see people walking the street all going in one direction.  At one intersection, a white Toyota pickup blocks the street.  Several armed men dressed in black are on guard.  We leave the taxi to continue on foot but not before having our bags checked by the armed Mahdi militia.  They are courteous and friendly, one even begins to ask me about my camera equipment - he too is a photographer - as I empty the contents of my backpack onto the tailgate as part of the security search.  We are assigned a guard who escorts us a few blocks past lines of other black-clad men wielding weapons and checking each person passing through their cordon.  Arriving at an open-air hut with a table beneath, we exchange our press passes for official Friday prayer press passes.

The level of organization, courtesy and feeling of safety is astounding, especially given media reports that Madhi militiamen are a poor, uneducated, rabble rousing bunch.

The crowd moving toward the site thickens the closer we get; the feeling is light and it's just as David said it would be - that of a rock concert.  All of the men are carrying prayer rugs, some have umbrellas and many have towels - some folded neatly on their heads and others are worn turban-like - to catch the rivers of sweat pouring from their faces.  Men and children hawk food, colorful posters of various clerics, books and badges showing Moqtada al-Sadr's face.  Amal buys three of these and distributes them among us.  "Put this on," She says.  "It will help."