Jake Maloney was thrilled when he discovered that the beloved-but-defunct Oscar restaurant had been reborn as Rough Cut Brewing Co. "We're always looking for restaurants in the area where we can go, especially with the kids," says Jake, 38, a high school teacher who lives near the Kerhonkson brewpub with his wife, Briana, and their two children.

Brothers Jesse and Bart Cummings closed Oscar in 2011 while the economy was sputtering. The partners couldn't afford much-needed electrical upgrades and cosmetic renovations, and investors were scarce. But given the wild popularity of craft beer, they had no trouble finding a cash infusion for their brewpub concept. They reopened on June 11 as Rough Cut Brewing Co. with new electrical and plumbing systems, brewery equipment, and a rustic-industrial makeover that includes an island-style bar fashioned from a slab of concrete. They also added a third partner, brewer Kayne Konecny, who spearheaded the renovation. Konecny honed his beer skills as a homebrewer and learned the construction trade from his contractor dad.

Konecny also netted Rough Cut's biggest investor. "Kayne's beer is awesome," says investor Vanessa Cerny, 29, a microbiologist who lives in northern New Jersey. Cerny and her husband, a homebrewer and an auto mechanic, wanted to open a brewery themselves but didn't think they had enough experience. She and Konecny had spoken when he was planning to open a brewery in Brooklyn (more on that later). Cerny and her husband came to Kerhonkson in spring 2014, saw the operation, tasted Konecny's beer, and wanted in. They even bought a small plot of land with a house that needs a complete makeover half a mile down the road from the brewery so they "can be where the action is," Cerny says. "The area is gorgeous, we've got the state park right there, and Jesse and Bart have very good food-preparation skills."

Indeed, Rough Cut seems to have hit the right formula: Business is booming. For now, the partners are keeping their operation lean and small, at eight tables. (Oscar had 14.) Jesse lives in a small cabin behind the brewpub and is its sole waiter. Konecny is the bartender, and Bart is the chef. To the partners, Rough Cut means "we're learning," Jesse says. "Everything is always in process."

In 2013, Konecny had moved from Brooklyn to an 1840s Kerhonkson farmhouse—which he also renovated—after his plans to open a brewery in Brooklyn fizzled. He approached the brothers with the idea of launching a brewpub in Oscar's space. They were sold after they tasted his beer, and the deal was sealed when his citrusy, tropical Deserted Island IPA won a local competition.

"When we opened Oscar, we didn't have much money, and we're not as handy as Kayne," says Jesse, 42, a former freelance cameraman who moved from Manhattan to Kerhonkson 10 years ago to help his chef brother with Oscar. "The place was always a little chilly in the winter and a little hot in the summer. Kayne stripped the entire barroom to the studs and in the process did the things that my brother and I thought always needed to be done. He shored up the roof, reinsulated the entire room, and redid all the electric and all of the plumbing."

Patrons sit across from each other at the bar, fostering a sense of community. The tin ceiling, barn-wood paneling, and hand-hewn timber beams over the bar—courtesy of Konecny's farm—complement the handcrafted wood tables the brothers commissioned from local woodworker Bill DeFelice.

Bart retooled the menu to offer locally sourced creations with a heavy emphasis on one of Oscar's best-sellers—steak—and plenty of simple, inexpensive items like wings, burritos, and burgers. "At Oscar, we tried to have a menu that represented everyone, but the fact of the matter is we're in steak country," says Bart, 39, a native New Yorker who worked as a chef in Los Angeles for five years before moving to Kerhonkson. "This is a place where people go to indulge. We're showcasing Kayne's beer, and I'm trying to come up with bold flavors that go with it."

To stand up to Konecny's strong double IPA, Bart created a rib-eye with a green peppercorn and brandy cream sauce and a New York strip with a compound butter of black olives, black truffles, and herbs. He has a passion for lamb, which he sources from Vly Farm in Stone Ridge. Bart is also an ice cream genius whose signature flavors include tarragon, basil and hopped-up hempseed, a heavenly confection prepared by steeping whole-leaf hops in cream. 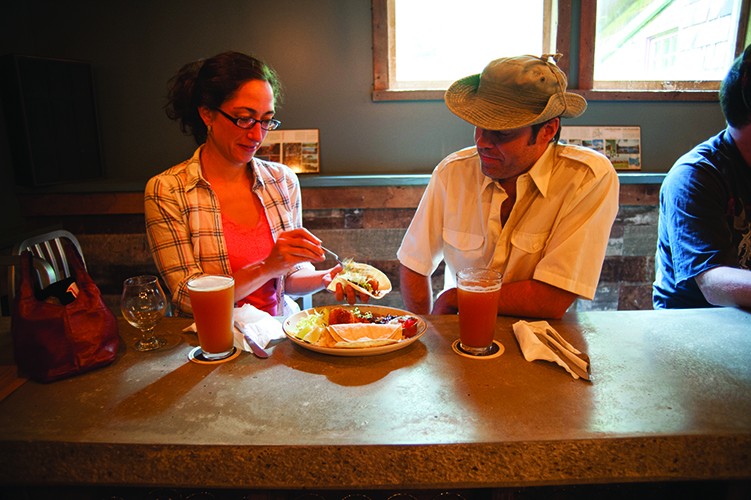 This is Konecny's first professional gig. Among the seven brews he has concocted for Rough Cut so far are the super-hoppy 44/55 Double IPA, named in honor of Rough Cut's address, a Pomme d'Orange Belgian Tripel with orange blossom honey and homemade candy sugar that sounds and tastes more like dessert than beer, and a Shawangunk Brown Ale with smoked barley. There's even an accessible English ale for Bud drinkers.

"Kayne's amazing," Jesse says. "A lot of craft-beer places go overboard with bitterness in their hoppy beers. One of the things that distinguishes his beers is they're incredibly well-balanced. They're hoppy but not overly bitter."

Accolades for the beer are pouring in. Longtime Gardiner residents and live-in partners Jim Daley and Rose Hadden said they had never bothered to check out Oscar, but couldn't resist the notion of a local brewpub. "Fresh beer," says Daley, 56, an electrical engineer for IBM and a homebrewer, smacking his lips while sipping the Belgian tripel at Rough Cut's bar. "This is an expression of local beer. I would definitely enter it in a competition."

Seated at a table with her husband and children, Briana Maloney proclaims the Belgian tripel "really good and really crisp."

"It tastes like what a Belgian tripel should taste like," adds Maloney, 32, who tends bar for one of Rough Cut's competitors, the brewpub Bacchus in New Paltz. "And the food is excellent." Her four-and-a-half-year-old daughter, Mia, chimes in, calling her chicken fingers from the kids' menu "super-yummy."

With its cedar shingles and red trim, Rough Cut is a cheerful presence on Route 44/55 and one of just a handful of eateries, including the Mountain Brauhaus and Gander Inn, along a 10-mile stretch of rural roadway. The brewpub is strategically located four miles southeast of Minnewaska State Park and its stream of hungry, thirsty hikers.

A door in the dining room leads to the one-barrel brewing room, attesting to the beer's freshness. In a holdover from Oscar and in a reversal of the typical restaurant dynamic, half of Rough Cut's 1,000 square feet is devoted to a lounge with a huge stone fireplace, books, and board games that encourages patrons to linger. "People hang out for hours, which is awesome," Jesse says. "It's a social thing. We want to be that local hangout."

On a recent Sunday, British tourist Nigel Mann was enjoying a leisurely dinner at Rough Cut with a local friend. "This place is great!" says Mann, 46, a biologist, surveying the warm interior decorated with strands of white Christmas lights and praising Bart's roasted lamb leg with a fig sauce. "I sampled four of the beers and was particularly keen on the IPA, but my favorite was the brown ale. I could easily imagine having a pint or two of this beer while enjoying a convivial pub atmosphere on a winter's night."

The partners plan to expand into an existing dining room that is closed now and build a larger brewing room as their business grows. Outdoor seating is also part of their vision.

"I'm so surprised by how many former customers are coming back," Jesse says. "We've been absolutely packed every single night of the week. Our beer has been a huge hit, and we're already sold out of almost all our main-line beers. We have to brew around the clock pretty much. It's a blessing every day we're open."