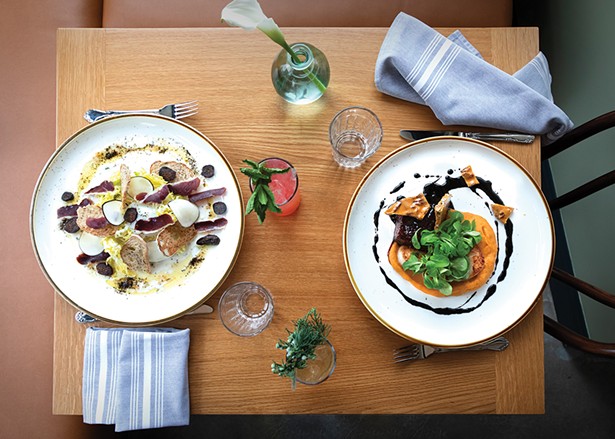 Attention! There's an upscale restaurant in Newburgh where you can get a two-piece order of fried chicken with a side of greens for under $10. Legit-good fried chicken. In the world of the $16 burger, this is a near miracle. The restaurant, Mama Roux, takes its name from a song by New Orleans' own Dr. John. It's owned by NOLA native Sterling Knight. "I wanted to price the menu so it appeals to everybody," she says. More on that fried chicken in a moment, but first, some background on the Big Easy. 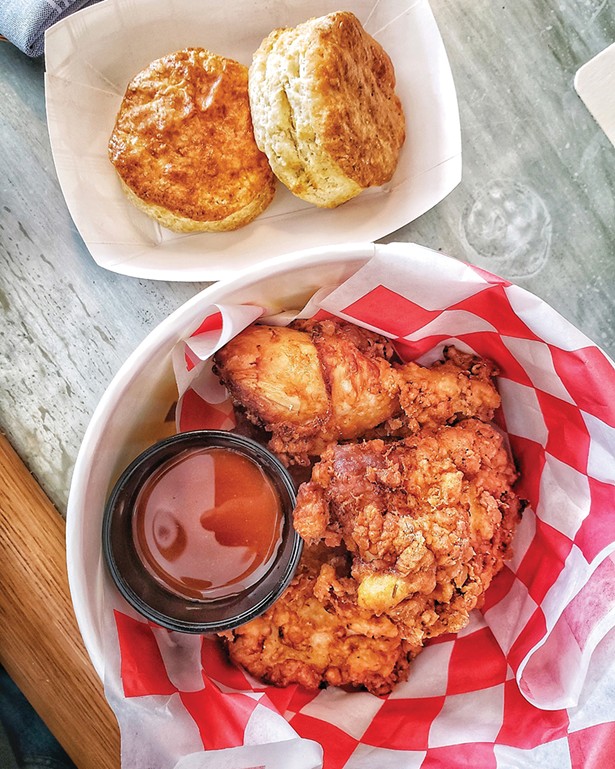 Brass band parades in New Orleans are composed of two sections, or "lines." The first line is the main group, featuring the band and the official club being represented. The second line follows the band and dances, often twirling parasols or handkerchiefs in the air. Second lining, as it's called, is the quintessential New Orleans dance style—self-assured, equal parts elegance and funk, with a whiff of voodoo. After a couple of trips to Mama Roux, I, like many Newburgh residents, have caught the second-line fever for the city's newest restaurant, which serves New Orleans fare informed by a country-French sensibility. 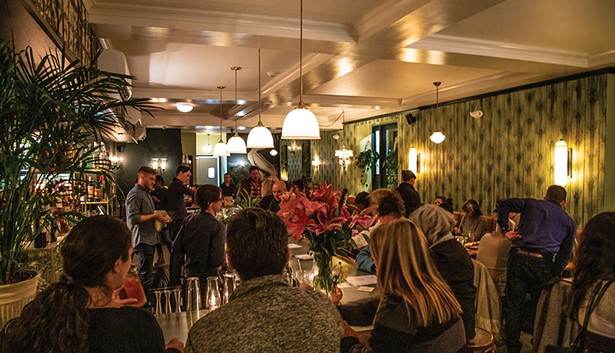 Any telling of how Mama Roux came to be should probably begin with Philippe Pierre, a former advertising executive who saw an opportunity in Newburgh's real estate sector. The company Pierre cofounded, Liberty Street Partners, began buying property in 2014, both residential and commercial. One of the first buildings in his portfolio, 115 Liberty Street, across from Washington's Headquarters, was "the ugliest building on the block," according to Pierre, though that did not stop him from opening Palate Wines & Spirits in its empty storefront. (He later secured grant funding to restore the building's historic facade.) A year later, Pierre opened Ms. Fairfax, a casual bistro that's become a community hub and further contributed to the rebirth of the Liberty Street Corridor.

Around the same time, Pierre's firm bought a long-vacant four-story building on the corner of Broadway and Liberty Street—an eyesore with potential. Working with the Newburgh Community Land Bank and various funding sources, Liberty Street Partners gave the building a complete makeover, building out six apartments (four low-income, two market-rate) upstairs. Pierre thought the storefront should house a restaurant, so he gave his sister-in-law, Sterling Knight, a call. 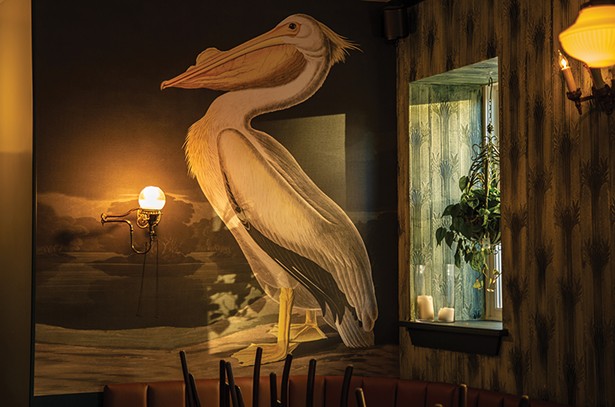 Knight is a former model who transitioned into the service industry nearly a decade ago, working in bars and restaurants in New York City; Sydney, Australia; and Chicago, where she oversaw the opening of Cindy's at the Chicago Athletic Association Hotel. While working for others, Knight gave herself on-the-job training in restaurant management, soaking up every aspect of the industry with a goal in mind—opening her own place.

Like many before her, Knight felt the magnetic pull of Newburgh once she started spending time there. "Newburgh reminds me a lot of New Orleans," Knight says. "There is grit, there's beauty, and it's not totally done." And the New Orleans-meets-country French concept not only fit her background, but also her market research—especially the fried chicken. "If you look at the algorithms of what people will go for," Knight says, "you find that if you do one of these four things correctly—pizza, burgers, tacos, fried chicken—people will line up for it." So, Mama Roux leans heavily on fried chicken, cheekily served in a paper bucket (whole chicken for $16) or perched on waffles at brunch ($15).

Mama Roux opened in late October after two-and-a-half years of plotting, planning, and renovation by Knight, Pierre, and associates. The restaurant's decor has a timeless quality, pairing vintage light fixtures and elegant wallpaper with more modern elements like the brushed concrete floor. A mural of a stately pelican looms over the back-corner booth, a silent avian sentinel. The wide windows on Liberty Street and Broadway flood the room with light during the day and offer a top-notch view of the city at night. Even at 56 seats, the room maintains its intimacy. The overarching effect is one of strange familiarity—Mama Roux just opened, but it feels like it's been there for ages. The distressed mirror behind the bar helps.

The kitchen is helmed by Matty Hutchins, who is executing and expanding upon Knight's NOLA-adjacent concept. Hutchins made a name for himself as the chef at the Hop in Beacon and had to be lured back from Atlanta. Hutchins's food surprises, if only because the menu hides gems in plain sight. For instance, take the hash tart ($4). It's listed under "Sides" without preamble or description. We ordered it only for want of potatoes. But when we broke open the scone-like presentation and tasted the black-eyed peas potato pocket, we were entranced. It eats like a gratin but is light as a feather, an ethereal gift disguised as a potato pocket.

The chicken liver pâté ($14) receives more prominent billing, but exceeds expectations as well. For starters, it's covered in a fine black snow—black trumpet mushroom dust. It's encircled by a Meyer lemon vinaigrette and paired with Von Trapp Farmstead's buttery, nutty Oma cheese. The liver flavor is subtle, not like you're ingesting the entire organ of a bird in one bite. Tart, creamy, and umami-forward, it's served with a grilled baguette. It's enough to drive to Newburgh for.

The menu is capacious. The eight appetizers also include a perhaps too-heavy wild mushroom poutine ($12), though, what was I expecting of poutine? Five salads, ranging from a Bibb lettuce and blue cheese ($12) to a steak and chicory ($18), all featuring either protein, dairy, or boiled egg, in true Fat-Tuesday style. There's also a handful of sandwiches: muffuletta ($16), New Orleans' take on the Italian combo; fried oyster po' boy ($14); and a grilled pimento grilled cheese on sourdough ($12) that's so oozy-gooey it's best eaten as an open-faced sandwich. For brunch, the blackened shrimp and grits ($17) is a standout. Served with cider-braised collards, tasso, and a poached egg, Chef Hutchins nails the spice on the shrimp, balancing the chili and herb notes for a pop of heat that doesn't obliterate the milder egg and polenta flavors.

Draft lines have yet to be installed, but there are a dozen beers in bottles and cans, from Miller High Life ($4) to Newburgh Brewing Company's Brown Ale ($4). The wine list is short—five whites, five reds—but a well-curated selection of old world wines, including Alois Lageder's northern Italian Chardonnay ($11) and a light but chewy Lulumi Pinot Noir from Languedoc-Roussilon ($12). 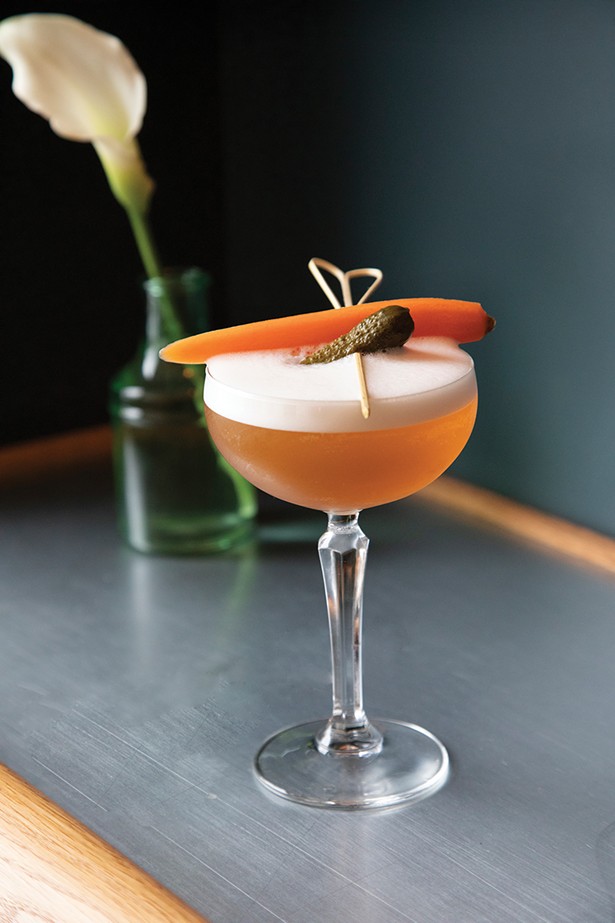 The cocktail program has some interesting choices, foremost among them the Midnight Mary ($11), a sideways glance at a Blood Mary, which is strained and served straight up, in a coupe with pickled vegetables. The drink's aggressive vegetal taste reminded my dining companion of minestrone, in a pleasant way.

Mama Roux—like Dr. John, like second lining, like New Orleans itself—is informed by tradition but not a slave to it. Mama Roux is not some ersatz Brennan's, churning out turtle soup and seafood gumbo. Its Southern hospitality, relaxed elegance, and solid food—all filtered through the irrepressible optimism that's infectious in certain sectors of Newburgh—position it for success.