Powerhouse Theater: School's Out, Theater's In 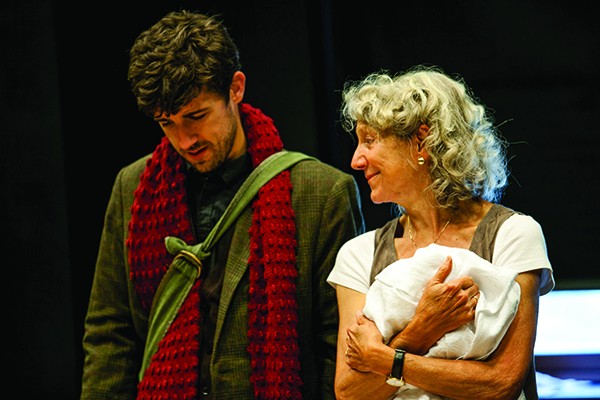 A collective sigh sounds from the campus of Vassar College when New York City-based actors, directors, writers, and designers arrive for the summer season of Powerhouse Theater which runs from July 1 through August 2. The buildings on campus are architecturally Hogwartsian and surrounded by tall trees, beds of flowers, and all the kinds of greenery an urban artist dreams of.

But Powerhouse Theater doesn't just attract artists from New York. Talent flocks from all across the country to Powerhouse Theater at the Vassar College campus during its summer months. "The ability to be part of something new is attractive to artists," says Johanna Pfaelzer, artistic director of New York Stage and Film, the organization that runs Powerhouse.

Nearly 250 professional actors and 50 apprentices come together for a five-week residency on the Vassar campus to form a thriving artistic community. This year, more than 25 theater pieces will be performed over the course of Powerhouse's 31st season.

The company chooses only original plays to be performed on its mainstage—a dedication to originality that requires Pfaelzer and the rest of Powerhouse's staff to sift through over 200 scripts a year. Only two out of all of the submissions end up finding their way onto the playhouse's mainstage (five more are performed as workshops).

This year, the company is putting on Keith Bunin's "The Unbuilt City," directed by Tony Award-nominee Sean Mathias. The play takes place in a townhouse in Brooklyn Heights where the untold history of New York City is revealed by an elusive art collector. Beth Dixon and Carter Hudson star. The second mainstage performance, "The Light Years," written by Hannah Bos and Paul Thureen, and directed by Oliver Butler, tells the haunted love story of a theatrical impresario that spans four decades called.

A few performances of interest that are appearing on Powerhouse's smaller stages include a reading of "15 Minutes," a musical by Rick Elice featuring "Dexter" star Michael C. Hall; and "Desire," a collection of short plays based on six Tennessee Wiliams' stories, directed by Michael Wilson.

The program also works to bring together experienced artists and students that are trying to break into the world of theater and film. The students are a part of Powerhouse's training program, which has cultivated the talent of a number of successful actors, directors, and writers. Included in the extensive list of notable alumni from Powerhouse is "How I Met Your Mother" star Josh Radnor. "When I was 19, the chasm between where I was and where they were felt enormous," Radnor says in a video reflecting upon his apprenticeship. Radnor is speaking of the same anxiety and doubts felt by a number of aspiring actors, but coming from a former apprentice who successfully broke into the daunting world of acting, it is a comforting sentiment for current students to hear. Pfaelzer observes the positive impact that results from "students see[ing] how professional actors had to work at it. It's reassuring and inspiring."

The artistic community and environment that forms around Powerhouse's summer season is "imperative to the experience," according to Pfaelzer—and both the students and professionals agree. Michael Wilson, the director of "Desire" and a Powerhouse veteran, says, "A lot of the appeal is the environment. The campus is very inviting and conducive to the kind of intensive work that bringing a play to fruition involves."