The 800 Goddesses of the Grace Project

Ten years ago, Isis Charise was working as a boudoir photographer, photographing women in the plush privacy of the salon-like studio in her Kingston home. After the Poughkeepsie Journal published an article about her business, featuring interviews with several clients who'd had transformative, empowering experiences, Charise got an odd phone call. A man wanted to book a session for his wife.

"His wife showed up with all these hat boxes and hangers," Charise recalls. "She was determined to be covered throughout the shoot, which was curious, because she was doing a boudoir shoot for her husband." But as the woman began to feel more comfortable, she paused to confess that she was a 12-year breast cancer survivor and had never shown her mastectomy scars to anyone other than her husband and her doctor.

"Her husband thought she was beautiful and wanted her to feel the way the women in the article felt about their bodies," Charise says. When they resumed shooting, the woman began to coyly show her non-mastectomy breast. "At a certain point, she was just feeling really sexy, odalisque, lying there on the couch, and she just threw off her shirt and said, 'Fuck it,'" Charise remembers. "It was this magical moment. I thought, 'Oh my god, I just watched this woman let go of 12 years of shame.' It was incredibly powerful and cathartic for me and very healing for her."

Several weeks later, she did a before-and-after shoot for a friend who was having a mastectomy. "I couldn't get the two of them out of my mind. I felt really drawn to explore this topic as an artist," Charise says. "When I went online to see what was out there, all I could find were these hideous medical photographs of women's torsos—head missing, bad fluorescent lighting, harsh scars. There was no humanity to it. I decided I needed to put a face to breast cancer and the beauty and grace that exists through that whole process."

As she delved into breast cancer research, she stumbled upon the staggering statistic that every day in the US, 800 people are diagnosed with breast cancer. So she set her goal for the Grace Project, as it came to be called: to photograph 800 women with breast cancer. (Her Instagram handle is @800goddesses). A decade later, she has captured more than 400 women on camera across the country, at various stages in their arc of their illness and grieving process.

"When I was first thinking about how to conceptualize the project, I wondered, 'How do you show something that is broken and hard to look at in a way that is palatable and beautiful?'" she says. "What popped into my head immediately is the Venus de Milo—a broken statue that has survived the trauma of history and yet is this most beautiful cultural icon. So, when it came to the project, it made sense to give women the concept of fabric to play with."

The photographs convey tender, unfettered intimacy; vulnerability and power. The women, draped in gauzy fabrics that catch the light, gazing at the camera through layers of pain and triumph, are archetypal.

The images are printed on silk and hung unframed, so they stir as you walk by and billow in the wind, bringing the women to life. 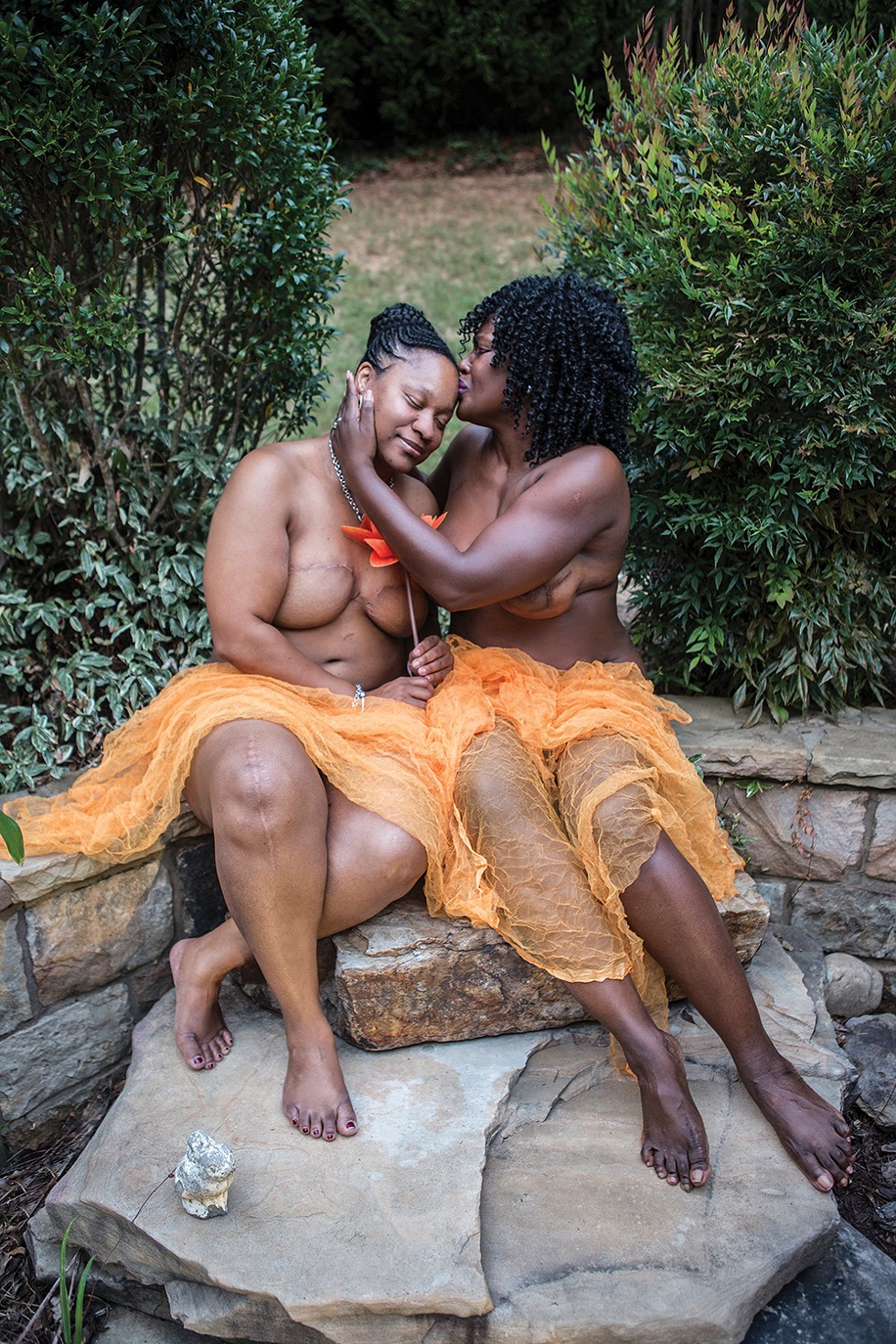 In honor of Breast Cancer Awareness Month, selections from the Grace Project will be on display at the Idea Garden in Kingston throughout the month of October. The opening reception will take place October 5 from 4 to 7pm and there will be an artist talk in conjunction with the O+ Festival on October 12 at 3:30pm.