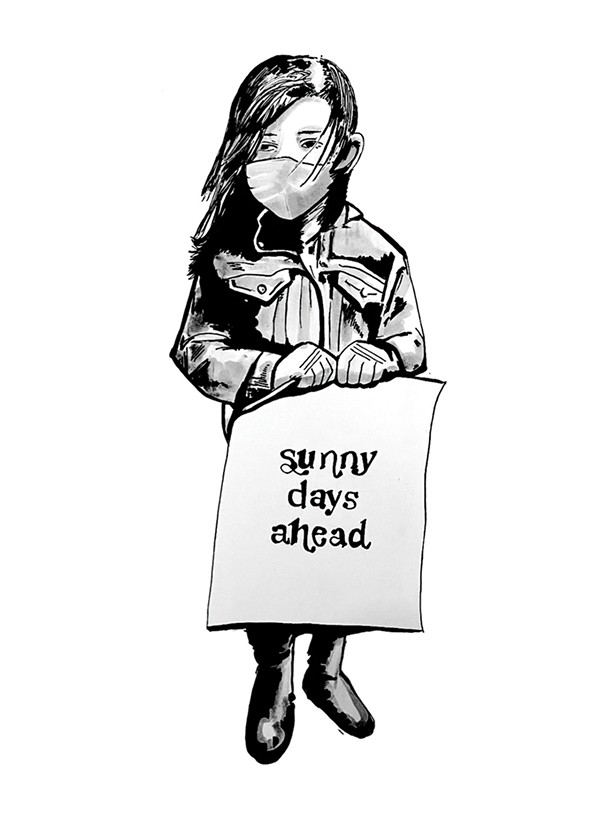 I flew from West Palm Beach to Philly on March 14, 2020, worried, like everyone else on the plane, about the air we were breathing. I had read that the window seat might be slightly safer than an aisle seat, so I opted for one. It was a clear, bright day. Even after we leveled off, I could see what was below. For a long time, the blue of the ocean stretched to meet the blue of the sky. Now and then a large, silent ship appeared. I chose to think these were cargo ships and tankers, not cruise ships full of people confined to their cabins. Later, we flew along a jagged coastline for a long time, until we turned in, over fingers of water mixed with land. Some fields were burning. As we began our descent, I reflected on the power of having known, with complete certainty, that this would surely be my last flight in a long time. What would have been, ordinarily, a cramped flight to endure had become a transcendent experience, full of unexpected beauty, outside time.

When I arrived home, I self-isolated for two weeks, my own isolation blending quickly into the mandated one. I imagined I was on a silent retreat, and that I would get lots of projects finished. In the early days, one of my friends said, "I bet, at the end of all this, I will still not have my slipcovers made." Little by little, I adjusted my expectations, and began living each day, as it came.

After three weeks, I searched my files for a story I knew was there of my mother having been quarantined as a child. The details were sketchy; when the family story was recorded, this quarantine seemed a small detail in the larger story of my mother's life. She'd had scarlet fever at 13, in 1927, and she'd been quarantined with her mother in their apartment in the Bronx, while her father and her sister stayed in another apartment nearby with her grandmother. Her quarantine, with a sign on the door forbidding entry, lasted three months, and the only details I had (oh, why had I not asked for more?) were that her teacher, Miss Delagar, had given her a book, which she treasured, and that her sister's boyfriend, Francis Eagle, who had only one eye due to a marble accident as a child, broke quarantine to come to see her.

I found myself longing for more details. How had she and her mother gotten along those three months? Her father was the light-hearted one. During that long quarantine, when scarlet fever had no cure, when she probably knew that Beth March in Little Women had died of complications of it, and when the Velveteen Rabbit had been threatened with being burned because of it, what was it like for her, my sweet mother? Her sister was the one who played the piano, and her mother did the sewing. What did she do there, those three months? Was she scared, or too sick to be scared? Did she read? Did they even have a bathroom in their apartment? Did she sit at the window and watch the traffic on Grand Boulevard?

I, too, was quarantined once, as a teenager. I spent a few weeks in isolation in the hospital, over Christmas. I was told that all my books, cards, and clothes would be burned when I left. Nobody but my parents and the doctor and the priest, gowned and masked, could visit me. My food tray was left on the floor, just inside my door. I looked forward, every day, to talking to the lovely man who came to mop my floor and clean my bathroom. The nurse's station, a small glassed-in room with green curtains I could see shapes through, was between my room and the room next door. I spent hours hoping to catch a glimpse of my neighbor, to find out what she had, who she was, to talk to her. I knew I was lucky that my room was at the end of the corridor, and that I had two bright windows.

Now, antibiotics cure the strep throat that caused scarlet fever, and hepatitis patients are not quarantined. Many diseases have their times when little is known. I wish I had asked my mother about her experience of being in the middle of a long period of uncertainty, of being sick, of being isolated, but I know what she would have said, "It was fine. My mother took care of me. I got better. I've had a very good life."