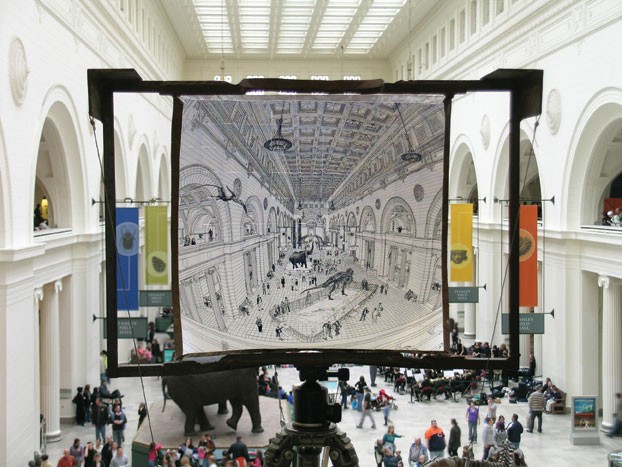 We forget that Impressionism, an art style we love for its lush sensuality, was the result of a scientific theory. Based on the latest 19th-century optics, artists discovered that we see through air, which subtly affects how objects appear: not with clear outlines, but with diffused edges. Why don't artists today use the latest research to create a newer theory? The answer is that they do—or at least two 29-year-old identical twins, Ryan and Trevor Oakes, do. A selection of their works will be shown in the lobby of EMPAC in Troy until May 31.

Because their mother was an English professor, Ryan and Trevor had an itinerant childhood, growing up in Colorado, Wisconsin, Virginia, and West Virginia, plus a half year in a 400-room castle in Scotland, when they were 10. The brothers attended Cooper Union as art students, graduating in 2004.

While at college, they became fascinated with the mechanics of sight. Their epiphany emerged from an optical illusion. If you bring an opaque object—such as your finger—close to your eye and focus on a distant point, the nearby object will replicate and become transparent. The Oakes brothers call this the "double ghost image." This phenomenon is related to drunks seeing double. By continuing to look into the "ghost image" but drawing what they see in the distance, Ryan and Trevor could represent true perspective, not the approximation artists are taught in school. They were literally learning to "uncross" their eyes.

An eye doctor they met by chance noted that their method resembles a common eye exercise. The Oakes brothers are improving their eyesight, by drawing! One often hears of the physical hazards of painting, but rarely of art improving health.

The twins moved on to consider the nose. "The nose is another element of vision that's hiding in plain sight," Trevor explains. Each of us constantly looks through our nose, pretending it's not there. Because it's so close, this facial prominence is invisible. When you close one eye, however, it appears. The Oakes brothers carefully detailed the contours of the once-vanished nose, both the left and right sides. They may have been the first to profile the elusive organ of smell from behind.

Currently, they are investigating the border around sight—the black edge of our vision that we habitually ignore. The Oakes Boys are mapping out how the distortion at the edge of our vision fades to black. They used this strategy for a drawing of the Concert Hall at EMPAC. This led them to depart from rectangular paper. "For the EMPAC drawing, we for the first time used the natural, organic perimeter," Trevor remarks. The shape of the paper they drew on resembles our actual field of vision—a 240° partial sphere.

Closely examining anomalies of vision brings into question the nature of the self. We accept the authority of our senses, which inform each of us that we are at the center of the world. But our senses are imperfect, fallible. Looking at the world as the Oakes brothers do, you begin to feel decentered...like a twin.

Each of the drawings is executed by a single brother, to keep the hand consistent—most often by Trevor. But the decisions are all collective: where to set the easel, which objects in the field to emphasize. The intention always is to exactly reproduce the experience of "occupying a human body" (to quote Trevor).

"Ryan + Trevor Oakes: The Periphery of Perception" will appear in the lobby of the Experimental Media and Performing Arts Center (EMPAC) in Troy until May 31. (518) 276-3921; Empac.rpi.edu/.