Although the time and place when people first created butter is a subject of ongoing debate, most anthropologists agree that butter arrived on the scene with Neolithic people, the first of our Stone Age ancestors who succeeded at domesticating ruminants. Once these early families had milking animals under their control, the invention of different dairy products was an evolutionary next step.

We'll never know the exact details, but the probable scenario goes something like this: One spring morning a herdsman is milking his animals, using the customary pouch of a tightly sewn animal skin as a storage container. Stored in the shade during the day, the pouch of milk starts to ferment slightly. As the sun goes down, the temperature cools, chilling the milk overnight. Early the next morning, the shepherd sets out with his herd for a new pasture, harnessing the cool pouch of milk to one of his animals. Traversing the bumpy route, the milk is rocked back and forth, rhythmically, for more than an hour. At a cool temperature and slightly ripened by bacteria, the milk fat is in an ideal condition for churning. Before long the herdsman's dairy load separates into thick butter flakes floating in an opaque liquid (buttermilk). 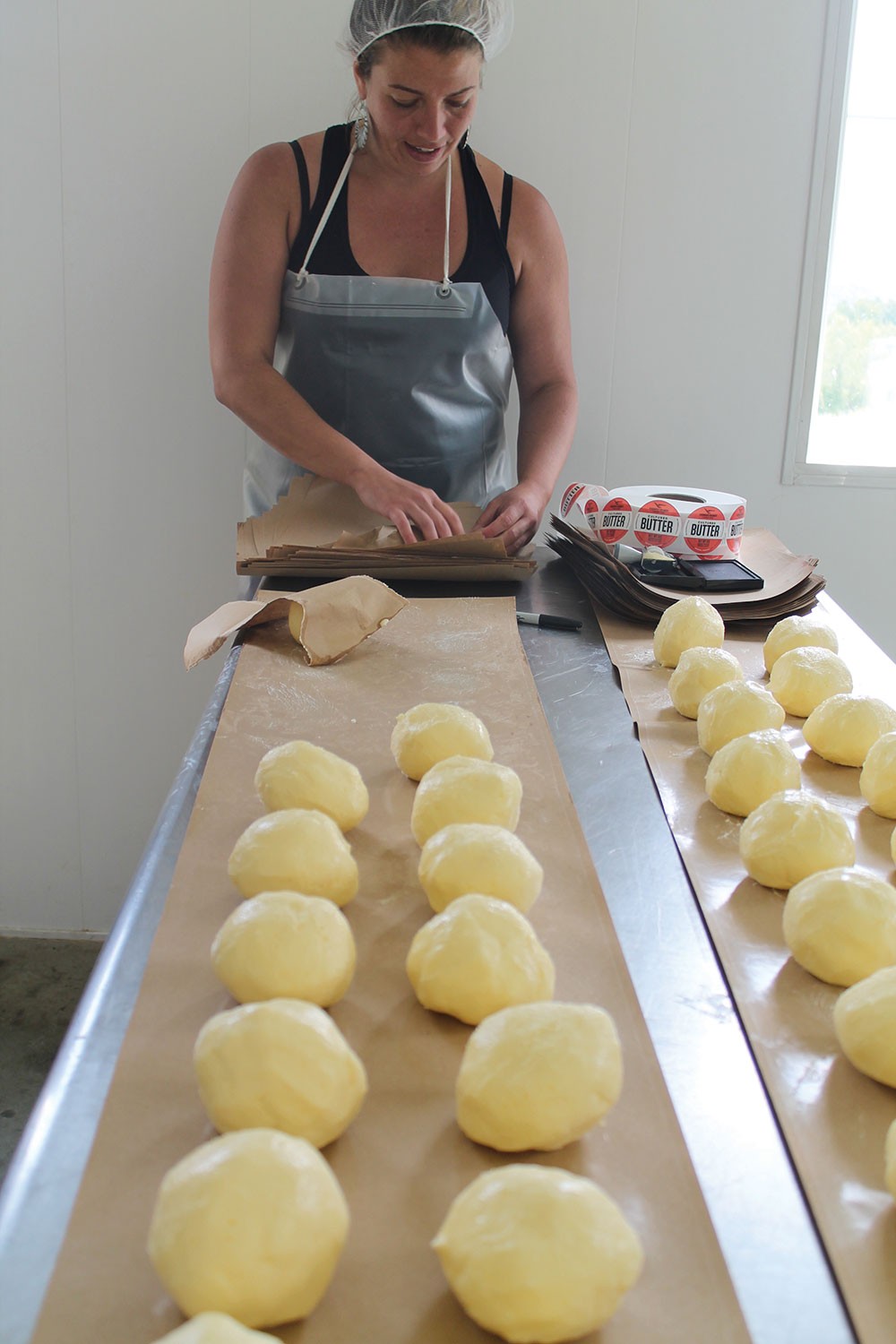 A possible and less romantic twist on this scenario—based on the theory that cheese making preceded butter making—is that the leftover whey drained from sheep's cheese curds, rather than the whole milk, was accidentally agitated, which then turned into lumpy bits of butter swimming in whey. (This is still the way sheep and goat butter are made in some traditional dairies, as a by-product of cheese making.)

Either way, the herdsman may have cursed his lumpy liquid at first, but we know how the story ends. Marveling at the rich taste of the butter kernels, he thinks surely this stuff is the result of magic by the gods. He smiles (I like to think) at their edible benevolence.

Eventually this ancestor and his clan also discovered that this tangy dairy fat was not only useful for eating but also for cooking, fuel, and medicine. For early dwellers in hot climates of the Middle East, Indus Valley, and Africa, this breakthrough would soon be followed by the realization that when butter is long simmered, its water content is driven off and its milk solids sink, leaving a layer of butter oil (most commonly referred to as ghee or ghi) that keeps for many months at an ambient temperature. And wasting nothing that was edible, prehistoric dairy folk came to savor the leftover buttermilk—as either a refreshing drink or the basis of a simple low-fat cheese (as is still done in many dairy cultures around the world). Turning liquid milk into these various "value-added" products, prehistoric animal herders created the world's first dairy processing industry.

You wouldn't recognize the world's earliest butters. For one thing, they were made from the milk of sheep, yak, and goats, not from cow's milk. Domesticated cattle came much later in man's conquest of various animals. From as early as 9000 BCE in the region of what is now Iran, communities relied on domestic sheep and goats, which are less intimidating in size and have comfort-loving dispositions that early man coaxed into submission. In the Near East, domesticated goats functioned as a virtual power tool and dairy plant for early man as well, defoliating the scrubby land as they grazed so it could then be cultivated. The animals turned this coarse plant diet into a ready source of good meat and milk. Goat's skin, being nonporous, also provided an excellent milk vessel.

Thousands of years later, man began to tame cattle species and other wild bovines for work. Although the doe-eyed bovine cow has become an international dairy icon, the ancient world was much less monopolized by this four-hoofed favorite. Other ruminants—like the camel, reindeer, mare, yak, and water buffalo—also played the valuable role of milk maker for thousands of years, particularly in regions of the world where a cow would never survive. 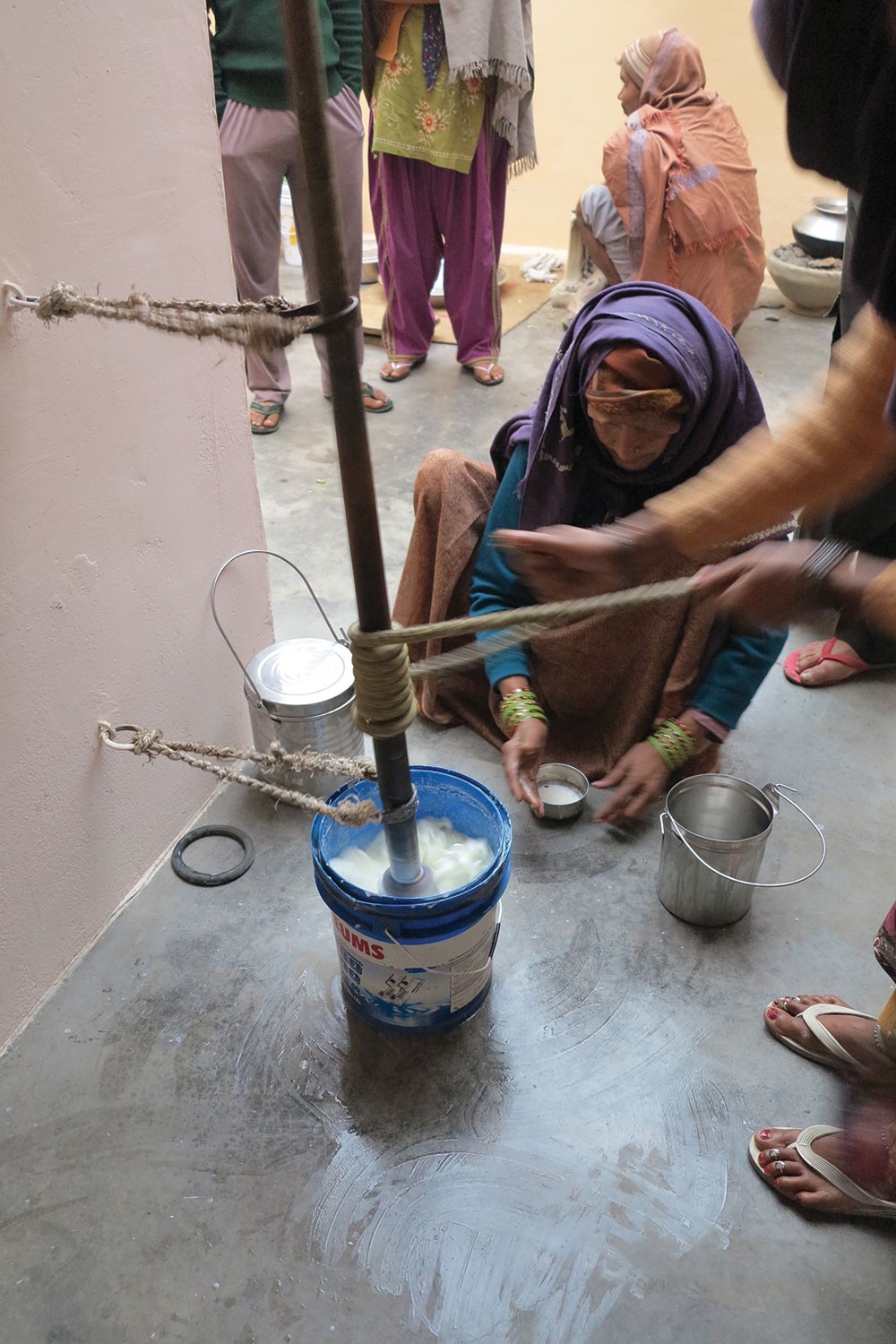 As butter making became less happenstance in Neolithic communities, its crude technology slowly advanced. The animal skin pouch filled with milk was moved off the back of an animal and hung like a cradle from a tree limb, or from a sturdy horizontal log supported at either end, or from the center of a tripod of logs. The filled skin could be easily rocked back and forth to agitate the milk for butter making. This primitive animal skin method of making butter can still be found in a few small, remote communities in the Middle East and northern Africa.

The Sumerians of 2500 BCE used special terra-cotta jugs for holding the milk and a plunger-type tool (called a dash or dasher in English) for churning it. In many parts of Africa, hollowed-out calabash gourds became the first butter churns; with their rounded bottoms, they were ideal for rocking the milk back and forth.

Just after the beginning of the Iron Age, butter making underwent a great regional boon with the expansion of another tribe of pastoralists, the Vedic Aryans, who flourished in the Indus River valley and northern India. Makhan, the traditional Indian unsalted butter made by hand from cultured whole milk dahi (yogurt), was a staple of these pastoralists, ancestors of today's Hindus. The milk of their water buffalo, by virtue of its higher fat content, gave excellent butter that was then simmered into ghee.

Although butter was common throughout most of the developing world by the first century CE, there were significant exceptions. All along the Mediterranean, olive oil became the ruling food fat (as it still is). Oil made economic sense in the region, since the same terrain that allowed the olive tree to thrive—craggy limestone slopes, light soil, arid conditions—was highly unfavorable to cattle dairying. Sure-footed foragers like goats and sheep fared well on the scrubby pasture, but their precious milk was generally set aside for cheese making. Only a little butter was made from whatever fat residue was in the leftover whey. Butter also suffered a poor reputation along the Mediterranean because the ancient Greeks and Romans who ruled the region associated it with the "barbarians" of the north.

Meanwhile, on the other side of the ancient world, most early Chinese communities, except those in the far north, would rarely see, let alone taste, butter since dairying itself was an anomaly. Some historians theorize that dairying was rare in the region because people of Chinese descent are highly lactose intolerant. (But, the chicken-or-egg counterargument goes, perhaps they are lactose intolerant because they didn't develop a dairy culture. The enzyme needed to digest lactose naturally recedes as a person ages, but in dairy-rich cultures people have adapted epigenetically to digesting this milk sugar throughout their lives.) Other observers, like food science writer Harold McGee in his book On Food and Cooking, speculate that dairying never took off in China because in the region where Chinese agriculture began, the wild vegetation was toxic to ruminants. Even so, dairy wasn't completely unavailable or rejected in the Yellow River heartlands, the birthplace of Chinese agriculture. Influenced by roving Mongolian nomads to the north, who spread their dairy culture through trade with bordering communities, the early Chinese believed milk products to be nutritious in small, digestible quantities, especially when heated or fermented. Chinese dairy luxuries included a cultured skim milk, a fresh cheese similar to cottage cheese, clotted cream, and butter oil similar to ghee.

The heavy hand of conquest also influenced butter's reach in the early world. In the Anglo-Saxon territories of the early Middle Ages, butter was typically made from sheep's milk—a remnant of Roman occupation. Cows existed in the region but they were kept primarily to breed the oxen needed to plow fields, not for dairying. Sheep, however, could supply four valuable commodities: wool, tallow, milk, and meat. Sheep dairies were the existing system of milk supply for the Romanized Britons and butter making was a minor by-product of making cheese with ewe's milk. The amount of sheep's butter produced was precious little (about two pounds for every one hundred pounds of cheese), so only the nobility or local thane enjoyed it. Butter was therefore a luxury in Anglo-Saxon times; not until the high Middle Ages, when wool and milk became more separate enterprises, did the dairy systems in the region shift from sheep to cow, making bovine butter more affordable. Before long, butter became so popular among all classes that its production was more profitable than cheese making.

Elaine Khosrova will read from Butter: A Rich History (Algonquin Books, 2016 at the Golden Notebook in Woodstock on Saturday, December 3 at 4pm.

Nibble Your Way into Spring at these 4 Hudson Valley Restaurants

Art of Business: Zen of Cheese