In 2002, while convalescing from Lyme disease, journalist Steven Kotler adopted an abused Rottweiler mix at the goading of a friend. The dog, named Ahab, bit him. Not knowing the first thing about dogs, Kotler asked his friend to write down a list of what he would need for the care and feeding of Ahab. The list contained all the usual items, like separate bowls for water and food, chew toys, etc. Item number 14 was “rub belly frequently.” And rub Ahab’s belly Kotler did. Counter intuitively, every time Ahab destroyed something—a couch, a chair—Kotler smothered Ahab with affection. According to Kotler, within a week, Ahab stopped destroying the furniture.

Soon after adopting Ahab, Kotler met writer and dog rescuer Joy Nicholson, whom he would eventually run off to New Mexico with to found Rancho de Chihuahua, a dog sanctuary 30 miles north of Santa Fe. Like Kotler’s approach to curing Ahab of his bad habits, Rancho de Chihuahua is an atypical dog rescue—no cages; the dogs run free across the house and the ranch’s fenced-in acreage. A Small Furry Prayer: Dog Rescue and the Meaning of Life (Bloomsbury, 2010) is Kotler’s memoir of running a dog rescue. It’s also a insightful mediation on the relationship between humans and animals that explores the realms of neuroscience, anthropology, and spirituality. Kotler, a blogger for Psychology Today and author of West of Jesus, which explored surfing as a spiritual quest, is at equal ease discussing scientific literature as he is narrating a face-to-face encounter with a mountain lion.

I spoke with Kotler from his home in New Mexico in October about coevolution between dogs and humans, equality among species, and dealing with the death of companion animals.

In A Small Furry Prayer, you write extensively about the coevolution of humans and dogs, and you suggest that not only did human evolution influence dog evolution but vice versa as well.
Coevolution is the outsourcing of basic survival needs. In our case, dogs became our alarm clocks and our burglar alarms. There is new information that’s coming out now that I haven’t looked at deep enough to know if its 100 percent, accurate but there are a lot of people who are starting to believe it was wolves who actually taught us how to hunt. They’re certain it was wolves who taught us how to live in larger groups and how to cooperate. But basically, when you coevolve, its the outsourcing of needs to another species. This makes fundamental changes on everyone involved.

This is something I never heard of—the idea that if we had not coevolved with wolves we might be fundamentally different.
Where humans got their morality from has been a longstanding puzzle. Altruism in general is a bit of a mystery. Cross-species altruism is really a big mystery, and where did it come from in the first place? Chimps are not like us, morally. They are very competitive. They will maybe extend kindness and courtesy to immediate siblings and parents—that’s about where it stops with our closest relatives. Taking care of the entire group, taking care of the weak, taking care of the young, taking care of the elderly, babysitting, all those kinds of things are things that happened because we coevolved with wolves. [Canine anthropologist] Wolfgang Schleidt has pointed out that the closest approximation to human morality that can be found on Earth is in the gray wolf.

You also cite cognitive function studies to suggest that humans might rethink the biblical stance of dominion over the animal kingdom.
Every time we draw the line between humans and animals and say, “This is what makes us humans and this is what makes animals,” that line gets blown out of the water very quickly. Animals weren’t supposed to have emotions, it turns out that they have all the same basic emotions as us. Human personality was supposed to be very, very distinct. Animals weren’t supposed to have personalities but that was blown out of the water. Consciousness, language, tool use, culture, [and] fashion have all been demonstrated by animals You can count the neurological differences between human and animals on your hand. There is a very hefty, weighty, and important moral argument why we should not think of ourselves as the superior species.

What I found with our pack specifically was the more freedom I gave the dogs in our relationship, the more they astounded me. I don’t think we have any idea what the upper limit on what’s possible between humans and animals if we start living as equals in a more egalitarian way, and that's what’s really interesting to me.

How do you not die of a broken heart watching the animals you care for die at Rancho de Chihuahua?
When the first group of animals died I thought I was gonna lose my mind. I really thought this was the end of me. The only thing I can tell you is, we’re pretty removed as westerners from death. Very few people are around death that much. We send people into old age homes and hospitals to die; it’s not a part of daily life like it once was. I have a different relationship to death now. I don’t know how to explain that other than it feels a lot more natural and less frightening. The heartbreak is just as severe but it doesn’t last for as long.

We nurse dogs back to health and happiness here. When they get to us, not only are they extremely physically messed up, they’re emotionally messed up. They’ve been abused or they’re not happy. So you get to bring these dogs back into happiness. Truthfully, at Rancho de Chihuahua our goal is to create as close to the environment the dog is evolved from as possible, for the animals. It’s an egalitarian environment. Lots of freedoms. Lots of fun for them. It’s a wonderful place to be a dog. They’re really freaking happy. So, yes, you see them die, but they got a great last six months or a great last year. Or they live for three years and they weren’t supposed to live three weeks. And they loved those three years. That perspective starts to take over and it lessens the impact. 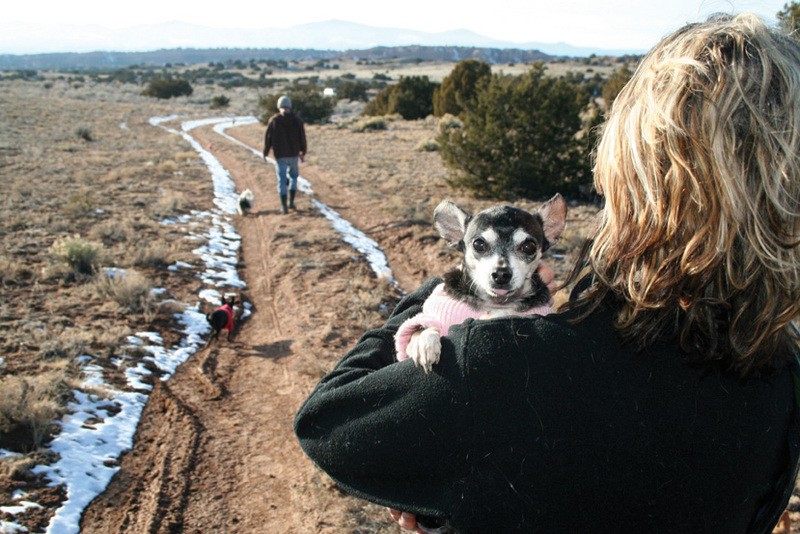 Gone to the Dogs: The Nebca Herding Trials