In Hillsdale, a New Brewery Dishes up Craft Beer and Wood-Fired Pub Fare 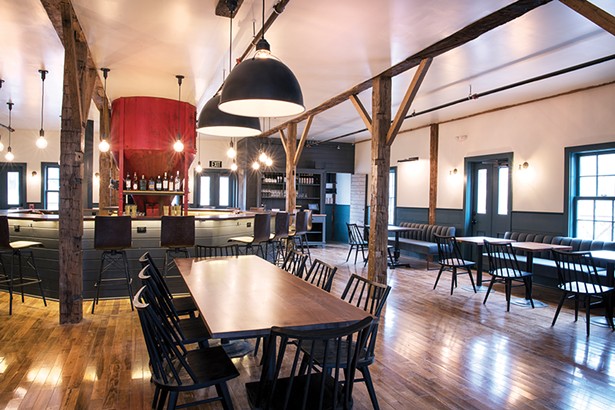 For the uninitiated, the seemingly sleepy town of Hillsdale holds a few surprises. The first is the rustic appeal of its off-the-beaten-path feel—inviting the impression of an unchartered upstate escape complete with the requisite forests and fields, winding dirt roads, and babbling brooks that Columbia County is known for. This is followed by the quaint, old-world allure of its charming collection of local businesses: cafes, art galleries, and mom-and-pop-type shops that line its main thoroughfares. And then there is Roe Jan Brewing Company, a contemporary craft brewery and restaurant that opened its doors on February 5.

Posted along the intersection of Anthony Street and White Hill Lane in Hillsdale's historic hamlet, the brewhouse boasts a rotating lineup of beers—including traditional ales, lagers, IPAs, and sours—along with an inventive and palatable pub menu that features wood-fired food made from scratch. The brewpub is the brainchild of developer Steve Bluestone and his wife Kathy, Hillsdale residents. Aiming to incite a spirit of community and connection, the brewery takes its name from the Roeliff Jansen Kill—which winds its way through Hillsdale. 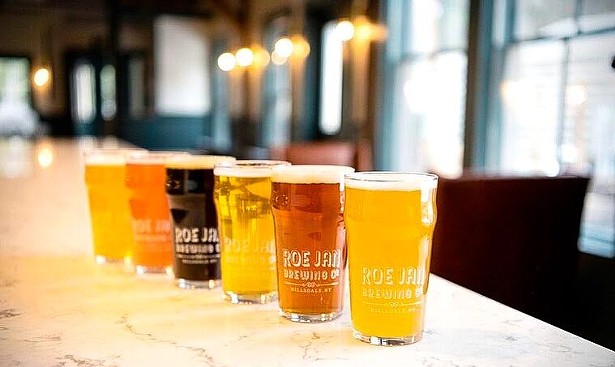 "Like many towns in Columbia County, Hillsdale's residents are a mix of those who grew up here and those who moved here to retire," says Kathy Bluestone. "We have a significant population of weekend homeowners, and because of our location there is a steady stream of tourists that passes through. We also expect to see a flow of traffic from craft beer aficionados who are interested in touring the region's breweries. Our goal is to provide a place where these diverse groups can come together to enjoy exceptional food and drink in a relaxed and unpretentious atmosphere."

Housed in a three-story structure that is steeped in Hillsdale history, Roe Jan Brewing Company holds the former address of the Hillsdale Mercantile Association, dating back to 1851. The building has been home to a host of other businesses over the years, including a shirt factory, a beer bottling operation, a farm and feed supply store, an art gallery, and numerous general stores. The Bluestones purchased the building in June of 2018, tackling a 20-month renovation project that would bring it back to life—a task that proved to be an immense, intricate undertaking given the edifice's longstanding legacy paired with the fact that it had been essentially unoccupied for nearly two decades.

"The foundation collapsed, and the entire building had to be lifted in the air," says Steve Bluestone. Once this was in place, the structure was lowered and reinforced with new steel and reclaimed wooden posts and beams. Historic photos from the 19th century provided the driving design inspiration for the adaptive-reuse remodeling, informing both the internal and external aesthetic of Roe Jan Brewing Company. Aiming to restore elements of the building's earliest architectural features, the outer layer of siding was peeled away to reveal an original board-and-batten exterior, while rotted roof brackets were replaced with replicas of their archetypes and a first-floor balcony that once wrapped the structure's south side was refashioned.

Armed with over 40 years of experience in real estate development and general contracting, Mr. Bluestone also brought his expertise in energy efficiency to the table when transforming the structure. "The building has been restored to be largely all-electric," he adds. The eventual goal will be to establish an offsite solar energy field, which will allow for net-zero energy. Totaling approximately 12,500 square feet of space, the three-story structure features a restaurant, bar, and open kitchen space at ground level, with seven modern apartments available to rent overhead and brewing tanks and storage space housed down below.

Stepping inside the roomy restaurant interior, guests are greeted with an inviting and intimately decorated dining room, which is flooded with natural light framed from sweeping stretches of window panels on three sides. The design of the space was spearheaded by local resident and interior designer Carrie Herrington, whose combined studio and retail space, C. Herrington Home + Design, is a prominent Hillsdale haunt. In an ode to its anthology of past lives, an assortment of antique items that were unearthed during construction are positioned around the interior. These include the podium at the entryway, the doors that divide off the coffee service area and restrooms, a gathering of grain sacks, and vintage signage.

The interior is anchored by a towering grain hopper that was once integral to building's former function as a feed supply store. Enclosed by an octagonal bar, the hopper acts as the showpiece of the space, lined with stools that work in tandem with a series of seating arrangements sprinkled across the space—including cafe and communal tables, cozy club chairs, and stools surrounding the open kitchen—to create a diverse dining interior. "We put a lot of thought into making our interior friendly and welcoming, with a variety of seating options that allow guests to dine privately at small tables or collectively at large communal tables or around the bar and open kitchen," adds Kathy Bluestone.

Affording uninterrupted views from where the food is prepared to where it is enjoyed, Roe Jan's open kitchen looks out onto the 79-seat dining room and is distinguished by a freestanding stainless-steel wood-fired grill. Flanked by crank wheels that adjust the height of the grills over the coals, the cult-favorite Grillworks cooking apparatus has been catapulted into the spotlight for restaurants in recent years. Vouching for its veracity, General Manager Joanna Virello was inspired to include the wood-burning grill in the kitchen. "It is the centerpiece of our big expo kitchen," says Virello. "Its role is to offer delicious wood-fired food that is locally sourced to our patrons and there is not another one like it in Columbia County."

Equipped with an innovative kitchen, Roe Jan's menu has been conceived with a personal touch under the charge of Executive Chef Charles Kiely, who heads the restaurant. "The food at Roe Jan Brewing Company is elevated pub food, where we always let the ingredients speak for themselves," says Kiely. "We do our sourcing from our conscientious farmer neighbors. My preparation and presentation are both very straight-forward and well-considered." Kiely is the former chef/owner of Brooklyn's renowned restaurant the Grocery, which garnered much attention while operating out of a small storefront along Smith Street in Carroll Gardens from 1999 to 2015. His portfolio of previous stints also includes positions at New York's Sign of the Dove, Arizona 206, Gotham Bar and Grill, and Savoy, as well as Michel Bras and Jardin des Sens in France.

Aiming to adjust its offerings to reflect both the changing seasons and the unfolding needs of the community it serves, the menu is filled with fresh farm-to-table vegetables and divided into four sections—Bar Snacks, Table Share, First Course, and Second Course—with each entry adding to the overall enticement of the dining experience offered at Roe Jan. "Ultimately, I cook what I'm looking for when I go out to eat, and more often than not, restaurants do not have enough vegetables," says Kiely, who urges every table to try a vegetable dish in the Share section before moving onto an entrée.

Crafted with both creativity and careful intention, the culinary offerings are rife with fresh-from-scratch elements at each course. These include dry-cured sausages for the charcuterie plate ($18), just-baked sourdough bread for the bruschetta, hand-rolled buns, small-batch spicy ketchup, and malolactic fermented pickles, which work together to collectively complement the meat, fish, and vegetables that comprise the main courses coming off the wood-fired grill. With dishes drowning in delectable ingredients, the diverse food menu hustles to maintain a harmonious balance with Roe Jan's brews and beverage offerings. "All of us in the kitchen are striving to match the quality and creativity of our brewers," adds Kiely.

A Balance of Science & Art

"I have loved beer since before I probably should have," says Hayley Shine who helms Roe Jan's brewery operations. Shine is a skilled and celebrated brewer with over a decade of experience in brewpubs. Recently relocating to Hillsdale from Chicago, her previous experience includes gigs at Oregon's Rogue Ales and Tennessee's CraftWorks Restaurants and Breweries. "Driven by a college-aged curiosity to understand how delicious things are made, I started home brewing and eventually made a career of it," says Shine. "Most of my professional experience is in small breweries where I have a hand in every part of the process and the opportunity to interact with people drinking my accomplishments. The balance of science and art I find in brewing suits me well and keeps me busy."

Working with fellow brewer Jeff Egan, Shine applies her knowledge of the industry on Roe Jan's exceptional, approachable, and evolving lineup of beers, which are produced from a seven-barrel Portland Kettle Works system. Diners can take time between bites to sip on one the seven brews that are included in the starting lineup and are currently available on tap. These include the light, crisp Hillsner lager, the traditional English bitter Morris Ale, the hoppy and hazy 22.5 IPA, the fizzy farmhouse Roeliff Saison, the dark and smoky Mercantile porter, the Emma blackberry sour, and the Taconic Gold Cider from Hillsdale's own Little Apple Cidery.

Bestowing a balanced lineup of brews and rich restaurant meals set against an historic Hillsdale backdrop, Roe Jan Brewing Company's much-anticipated debut adds another a pit-stop worthy restaurant on the route from Hudson to Great Barrington.