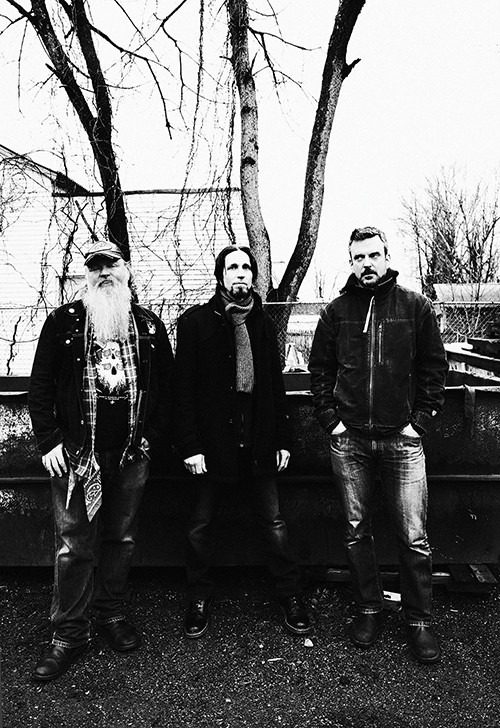 Is it true, that you're never too old to rock 'n' roll?

For Kingston's Pat Harrington (guitar, vocals, 44), Richie Touseull (bass, 48), and Chris Turco (drums, 44), the question is largely irrelevant. Rocking is, simply, what they do. In fact, the very name of their band, Geezer, not only acknowledges this, it celebrates it. Turco and Harrington met at a party in 2010 and bonded over a shared love of the Bad Brains and Celtic Frost, joking that "kids today are more [millennial-beloved emo-poppers] 'Weezer' and we're more 'geezer.'" (Ironically, YouTube yields footage of a Weezer tribute band in California also called Geezer.) But besides being a sarcastic allusion to their ages, the moniker is also a cheeky nod to the band's most obvious touchstone, Black Sabbath, via the name of that influential outfit's bassist, Geezer Butler. And, as with Butler's band, Geezer's sound is one of shuddering volume, dark moods, thudding beats, and crushing heaviness.

The heaviness. As Harrington points out, the manner in which it was being put forth in rock music underwent a change in the early 1980s. "Bands like Judas Priest and Iron Maiden got big and it became more about classically influenced guitar solos and operatic vocals," says the wizard-bearded singer in his gravel-and-sandpaper rasp. "When most people think of metal, it seems like those are the characteristics that come to mind first. Some people say that Geezer is metal, but I tell 'em we're not—we're a hard rock band. What we do is blues-based. It has deeper roots." A key point. Hard rock, after all, was born in the mid-1960s via blues-schooled legends like Jimi Hendrix, Cream, and Jeff Beck and retained much of its blues backbone in late '60s/early '70s followers like Mountain, Iron Butterfly, Led Zeppelin, Deep Purple, and the afore-mentioned Black Sabbath. But with the rise of the so-called NWOBHM (New Wave of British Heavy Metal) scene in the early '80s and the hardcore-influenced thrash wave at the end of that decade, most of the blues marrow was wrung out of heavy music—until bluesy "stoner rock" (so named for its practitioners' slow-nodding, bong-friendly beats) bands like Kyuss, Sleep, and Fu Manchu appeared in the 1990s. It's here, within the latter, ongoing movement, that Geezer lives.

Harrington and Touseull (the latter replaced the group's original bassist, Freddy Villano, in 2015) grew up in a hard rock/heavy metal bastion: Long Island, home of genre pioneers Vanilla Fudge and Cactus and the clubs that famously nurtured Twisted Sister. "There was definitely a lot of big hair around, but even as a teenager to me something about that scene always felt pretty contrived," grunts Harrington, the group's main songwriter and driving force. "But, then again, like most white American males of a certain age, when I when I was really, really young I was totally into Kiss. I have a brother who's 10 years older than me, and a little later he got me into Led Zeppelin, the Doors, all that stuff. Now, when I look back at what I was into and compare it to what my friends were into, it's, like, 'Man, that was some pretty dark shit for a little kid to be listening to.'"

By the late 1980s it had gotten even darker. With hardcore and metal merging via crossover thrash acts like the Cro-Mags, Anthrax, and D.R.I., Harrington was drawn across the East River to New York, with its all-ages matinees at CBGB and other venues; by the '90s he'd moved to town and was playing in a band called Gaggle of Cocks, which was followed by Slunt, a major-indie outfit that toured with Motörhead, Marilyn Manson, and Paul Stanley. Turco comes originally from farther north: Oswego, the home of a surprisingly vibrant 1980s hardcore scene, and has Geezer's longest rap sheet. Bouncing between West Virginia, the Baltimore/DC area, and Brooklyn, he drummed in indie units Trans Am, Les Savy Fav, White Hills, and Scene Creamers, performs with area improv rockers Ultraam, and intermittently fronts his own Chron Turbine.

Prior to meeting, all three had jettisoned the high rents and claustrophobic madness of New York and ended up in Kingston during the post-9/11 exodus of the early 2000s. "My wife and I were just done with Brooklyn," says Touseull. "We wanted some space and community, and I just didn't get the scene there anymore. I was feeling like everyone had their own agenda." Even though they'd hit it off when they met, at first Harrington and Turco had no plans for a serious project; their initial collaboration was to record something for a well-paying Jeremiah Weed whiskey ad campaign, which was looking for music in the vein of ZZ Top. "We sent something in, but they actually just ended up getting ZZ Top to do it," says Turco with a laugh. "But there was definitely something clicking with Pat and me, so we just kept it going." Harrington had recently immersed himself in the blues and fallen especially hard for the raw, growling sounds of Charley Patton and Son House, pairing those influences with the loud rock he'd been playing. Geezer's rootsy tack was made plain with the title of their 2013 debut, Electrically Recorded Handmade Heavy Blues. The following year, however, brought a psychedelic shift in the form of Gage, a five-track EP that opens with the spacey, throbbing "Ancient Song." "One of the things I hated about the metal scene on Long Island when I was growing up was that the music felt so boxed-in," Harrington says. "So it's great to be free of that and to improvise and try different stuff." Villano, then living in Ithaca and wearying of the commute, soon bowed out to make way for Touseull and the band took the rock on the road, touring with Michigan quartet Bison Machine and rolling down for New York gigs.

Of great help in spreading the word about the band among the stoner rock tribes has been the scene's wide network of blogs and podcasts, which can be viewed as the digital update of the demo-trading cassette underground that was so crucial to the 1980s thrash metal scene. One such successful outlet is Harrington's podcast "Electric Beard of Doom," which is now in its fifth year and recently clocked its 82nd episode. "It kind of made sense for me to get into [podcasting], because I'm a stay-at-home dad and I do voiceover work, plus I'm always into checking out other bands," says the singer about the show, which plays current and classic heavy rock sounds. "And it's definitely opened some doors for the band—I have a lot of listeners in Europe and other parts of the world." (Harrington posts new shows on Saturdays via Mixcloud, where past episodes are also archived.)

STB Records recently released Geezer’s self-titled third album on double LP (it’s out on CD via Ripple Music). A monolithic masterpiece of the threesome’s chosen field, it’s an avalanche of pummeling tempos, acid-injected explorations, and boulder-hurling caveman riffs. “Geezer have mastered the flow and groove of their own form of heavy and psychedelic blues rock,” raves JJ Koczan of critical blog The Obelisk. “Marked by classic instrumental chemistry and modern grit, their jams bridge a gap of decades easily and with fluidity. Pat’s slide guitar doesn’t hurt either.” Next month, the group floats on the fumes of their rising stoner status across the Atlantic to play the sold-out Freak Valley Festival in Germany and other dates.

Until then, they're hanging tight at home and doing the occasional regional gig. "I'm lucky to have an extremely supportive wife, who sees how playing music keeps me sane," says Harrington, whose second child was born in February. "Sometimes I think it'd be easier if I was into something else. But you know how it is, man. I didn't choose to do this stuff. It chose me."

Geezer will perform with ex-Ozzy Osbourne guitarist Zakk Wylde at the Grammercy Theater in New York on May 18. Facebook.com/geezerNY. Mixcloud.com/ElectricBeardOfDoom.