Rock and Remembrance at Basilica Hudson 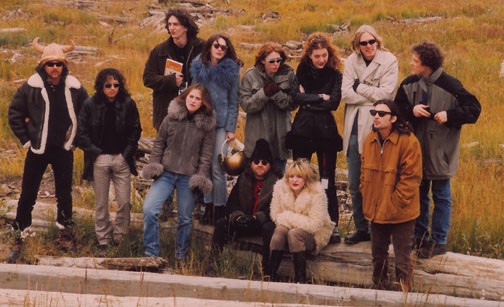 For many, the music of Hole has been little more than the backdrop to band leader Courtney Love’s drama-filled marriage to Kurt Cobain and the rest of her tabloid-trauma, Hollywood-train-wreck public life. But there’s no denying it’s been a millions-selling, arena-packing backdrop. Formed in Los Angeles, the group straddled the grunge wave to become one of the major alternative acts of the 1990s, achieving huge commercial and critical success and motivating many an angst-ridden grrl to scream into a microphone. No doubt the hell ride of Hole is one heck of a story. And now two of the band’s members, guitarist Eric Erlandson and drummer Patty Schemel, have come forward to tell it: Erlandson via the book Letters to Kurt and Schemel by way of the documentary Hit So Hard. On April 8 the twin releases will be celebrated with “Rock ’n’ Remembrance,” an event at Basilica Hudson organized by the pair’s one-time bandmate and the venue’s co-owner, bassist Melissa Auf der Maur. In addition to a reading from Letters to Kurt by Erlandson and a screening of Hit So Hard, the evening promises a rare reunion set by the three musicians.

“You could say [writing the book] was cathartic, but that implies that it was uncontrolled, which wasn’t the case,” says Erlandson, who founded Hole with Love in 1989. “A lot of careful thought went into it. It was very much a meditated-upon process.” Rather than simply being a straight chronicling of Erlandson’s time with the band, Letters to Kurt (Akashic Books) instead hints at Hole’s tumultuous milieu via 52 surreal, impressionistic prose poems posthumously penned for the late Cobain.

After debuting with 1991’s corrosive Pretty on the Inside (Caroline Records), Hole hit the mainstream next with 1994’s Live Through This (DGC Records). Auf der Maur replaced bassist Kristen Pfaff, who performed on 1998’s Celebrity Skin (Geffen Records) and died of a heroin overdose two months after Cobain’s suicide. Along the way, Love’s A-list profile increasingly overshadowed her band, thanks to her film roles, notorious drug use, and the custody battle over her and Cobain’s daughter. Although the band officially split in 2002, Love has since revived the Hole moniker, assembling an entirely new lineup.

For Schemel, whose own bout with heroin and the homelessness that followed her departure from Hole in 1997 are essayed in Hit So Hard, life reached some especially dark hues. “For me [watching the movie] reminds me of all the things I could’ve done differently,” says the drummer, who provided the vintage footage for the film and currently plays in LA trio The Cold and Lovely. “But we were all so young then, trying to figure out who we were as people. There are scenes of me and Melissa talking about someday having kids who play together—and now that’s what’s happening. So I guess everything’s happened the way it was supposed to.”
“Rock ’n’ Remembrance” takes place at Basilica Hudson on April 8 at 6pm. Admission is $8. (518) 822-1050;