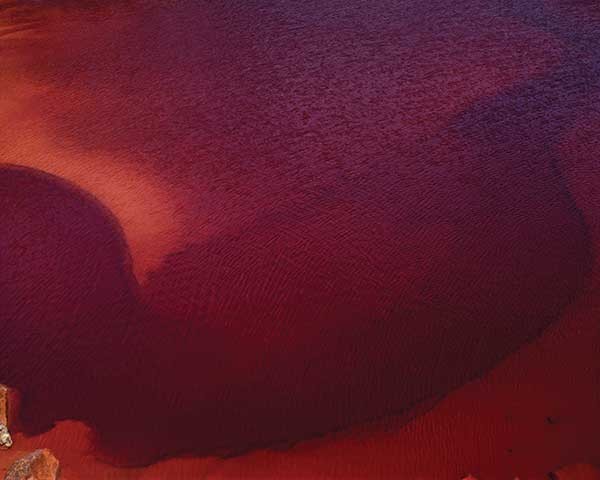 When viewed in the context of the Beacon Institute for Rivers and Estuaries, Robin Dana's photographs might be mistaken for the work of a crusading eco-artist, a Rachel Carson of the lens. The Beacon Institute, where Dana's work will be shown starting on March 9, is an environmental research organization focusing on monitoring river ecosystems. At its gallery space on Main Street in Beacon, the Institute has been showcasing the work of water-focused artists for the past 10 years, including shows by Ted Spiegel, Eric Lind, and Joseph Squillante. Dana, a Florida-based photographer who's spent time in the Hudson Valley, is not cut from quite the same archival paper as these notable locals. She shoots landscapes, predominantly aqueous images, but Dana's not crafting nature porn—purple mountain majesties and Edenic river scenes. Her work, which closely observes the natural world where it intersects with human activity, is linked in spirit if not scale with that of Yann Arthus-Bertrand, whose aerial photographs in Earth from Above document the earth's fragile environment while maintaining a rigid aesthetic discipline. "I've never photographed something because there was litter in it, or because there was an oil slick," says Dana. "Oil on water is just really beautiful."

Dana grew up in central Georgia, in an area known for its large deposits of the mineral kaolinite (also known as China clay, or kaolin), which is mined for use in an astounding variety of products, from ceramics to toothpaste. In 2004, Dana began a multi-year project shooting kaolin sites. She was particularly drawn to the pools of collected water in abandoned quarries, where the mixture of kaolin and chemicals used in the extraction process can produce fantastical colors. The best photos in this series capture microcosms—weeds submerged in milky water, piles of brown rocks of indeterminate size—that can almost be viewed in a similar light as abstract paintings, given their minimal figurative content and outsized concern for color, shape, and composition.

The kaolin series also became a self-taught master class in landscape photography for Dana, and provided the basis for her rigor about site selection, which she's brought to her photographs of nature's existence in extreme conditions in Italy, Cuba, and Washington, DC, among other locations. "It took me a long time to start to say something about the kaolin mines that wasn't documentary but interpretive," says Dana. "I learned about how ephemeral the visual experience was. I could go somewhere one day and the next day it could be totally different."

Dana's landscapes are models of surface serenity—still pools, placid streams—that roil underneath with our misplaced stewardship of the natural world. Yet the work is tight-lipped as to its opinion of natural grandeur vs. despoliation—the landscape only becomes interesting to Dana once it's been affected by civilization.

Dana has lived in St. Petersburg for the past two years, and she has yet to find a nearby site that excites her attraction to the "intermixing of strange and unnatural colors in spaces that otherwise ought to be beautiful." Clement weather and pretty beaches can be tough on an artist. "The real problem with Florida is that everything is too picturesque," says Dana. "The water is blue and the days are too sunny. I haven't found the right landscape for my work yet, but I will. It just takes me some time to find the grit."

Robin Dana's photographic exhibition "Watershed: How Industry Has Changed the Water of the World" will be shown at the Beacon Institute for Rivers and Estuaries Gallery, 199 Main Street in Beacon, from March 9 through October 7. An opening reception will be held on Saturday, March 9, from 5 to 7 pm. (845) 838-1600; Bire.org. Visit Robin Dana's website to see more photographs.

A selection of photographs by Robin Dana from the exhibit "Watershed: How Industry Has Changed the Water of the World," which will be shown at the Beacon Institute for Rivers and Estuaries Gallery from March 9 through October 7.