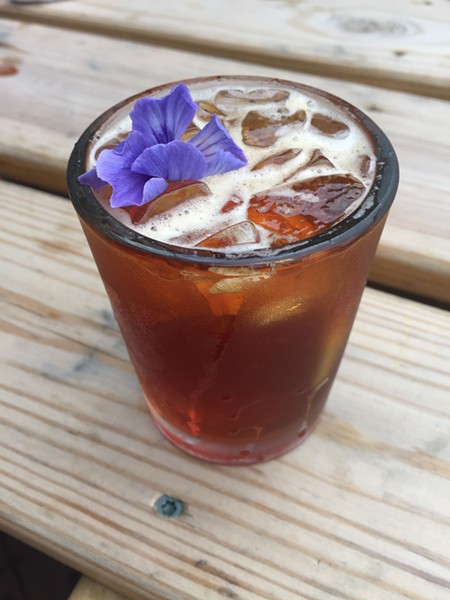 The Adirondacks is not the first place I travel for adventurous eating. Catalonia, Los Angeles, New York City, and, frankly (and gratefully), the Hudson Valley come to my mind first. But when I visit Lake Placid, I make sure to eat at Liquids and Solids.

Best known as the host of the 1980 Winter Olympics and the birthplace of patriotic singer Kate Smith, Lake Placid is a tourist town that comes alive for a couple months in summer and again for ski season in winter. There are plenty of places to eat—more than 20 restaurants on the main drag, Saranac Avenue, alone—but most tend toward safe, informal, family-friendly food: steaks and burgers, lobster rolls, pizza, Mexican. (Breakfast is generally more exciting than dinner here. Two recommendations for hearty egg preparations: The Breakfast Club and the Farmhouse Cafe.)

Liquids and Solids was a hot tip I got a few years ago from Chronogram’s creative director, David Perry. He told me there was a tapas-style joint that was serving innovative and irreverent takes on farm-to-table fare around the corner from the Olympic training center. After five or six visits in as many years, I have to say that David was not wrong. Liquids and Solids is the place to eat in Lake Placid.

On this trip, my family and I only had time for some snacks (sadly), but we made the most of it, eating outside at the picnic table on a balmy summer afternoon.

Liquids and Solids has a fantastic and inventive cocktail program, so we started there. Two standouts: The Balsamic Fizz ($10), made with vodka, strawberry basil and balsamic puree, pineapple juice, soda water; and the La — A (pronounced luh-dash-uh, $12) and made with mezcal, chicory root, strawberry cucumber shrub, grapefruit, and lemon. The Fizz is refreshing and tangy; the La —A is smoky and boozy. There’s also well-curated beer list, with a handful on tap and 50 beers and ciders in bottles and cans from artisanal producers, including Newburgh’s own Graft ciderie and Grimm Ales in Brooklyn. Try Grimm’s Living Daylights, a delightfully aggressive sour ($9 for 16-ounce can).

We started with a cheese and charcuterie plate, choosing a trio of cheeses ($7 each) from nearby Sugar House Creamery. The semi-soft Pound Cake, nutty and lush, was our favorite. We also ordered the pork and pistachio terrine ($7), a coarse, crumbly take on the standard pate preparation.

As my siblings were only snacking before dinner, we ordered only three other small plates to nibble on. Trumpet Mushrooms ($12) served with ricotta and a soft-boiled egg in a marsala-rosemary sauce was a salubrious meeting of woods and barnyard. The simply named Salad ($11) was all you expect in mid-summer: crisp Salanova lettuce, peaches, beets, walnuts, and Balsamic vinaigrette. Ricotta Arancini ($12) were quite familiar—fried cheese balls by another name—until you dipped them in the chicken skin dressing, which is just what it sounds like, vinaigrette made with chicken skin. The dressing gave the dish an umami boost that elevated it above the everyday.

We decided to shoehorn in some dessert as well—just one as we had to eat dinner in a couple hours. We settled on the Ice Cream Sandwich ($10), chocolate bourbon ice cream and a walnut crumble between two slices of wonderfully moist and sweet cake.

Next visit, we’ll stake out more time for a full-fledged meal at Liquids and Solids.