Rhinebeck: Violet Capital of the World 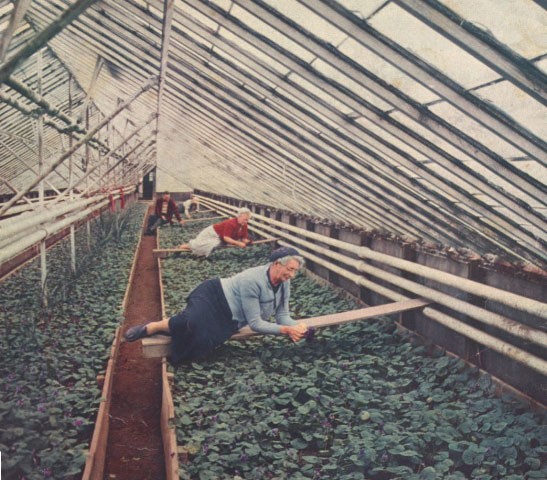 Few people know that a violet-growing industry once bloomed and boomed in Rhinebeck, bringing the region international renown and a sturdy economy for a generation. By the early 20th century, Rhinebeck produced five million purple buds, purchased as corsages for the fairer sex.

One could be forgiven for this oversight, for extant evidence of the fabled era is negligible: a Poughkeepsie street is named Violet Avenue. Or take a shovel to any Rhinebeck backyard lawn. The result would be heaps of glass, the remains of the acres of greenhouses that covered the landscape so abundantly, the town was called The Crystal City.

This is the bittersweet coda to the new documentary Sweet Violets, by Glenford-based filmmaker Tobe Carey. The film will have its premiere screening at Upstate Films in Rhinebeck on February 12.

Assembled with spit, sealing wax, and an abiding respect for heritage and the people who create it, Sweet Violets is an elegy for a bygone era. The third of Carey’s films to examine this region, it was preceded by The Catskill Mountain House and the World Around, a celebration of the grand hotels that brought the wealthy to this region, and, arguably his masterwork, Deep Water: Building the Catskill Water System. The latter is a passionate work about the evils of eminent domain and how New York City obliterated 30 local communities to build a reservoir.

Sweet Violets was an afterthought, Carey admits. In 2000, he was working on Deep Water with Woodstock musicians Robbie Dupree and Artie Traum. Traum’s wife Beverly, who ran a Rhinebeck antiques store, mentioned that a violet industry once thrived in the area.

“I didn’t pay any attention to it,” Carey says.

But Beverly Traum met up with the filmmaker again at a January, 2011 screening of The Catskill Mountain House and reminded him. Carey was finally hooked. “I was fascinated with the subject of this flower that nobody uses these days.”

He spent the ensuing year interviewing local historians, academics, and the scions of the once-successful family businesses—which were started as a cottage industry to supplement farming after seedlings were brought over from England. (Only one business remains in the area: Battenfeld’s, which produces corsages from Valentine’s Day through Easter.)

Poking about museums, private collections, and historical societies in the region, Carey uncovered photographs, song sheets and postcards that celebrated the business that put Rhinebeck on the map as the Violet Capital of the World.

“I didn’t know if there would be enough material to do a film,” he says. He proved himself wrong. In 38 minutes, Sweet Violets rambles through a capsule history of botany, ancient mythology, American 19th-century business and numerous ways in which the violet was immortalized in popular song and film—notably, a short by Thomas Edison.

One of the reasons why the violet industry faltered was economics; gathering and bunching the fragile buds was slow and labor-intensive and done best by women and children. As American industry sped up, such efforts were deemed cost prohibitive. Another reason for the decline, unexpectedly, was homophobia.

In 1926, a melodrama titled “The Captive” arrived on Broadway. The theater piece concerned a love triangle between two women and a man. Violets figure as a plot device. The play was shuttered within five months amid public outcry and violets, now linked to lesbianism, plummeted in public favor. (However, lesbians began wearing the flowers defiantly.)

Carey is already working on his next film: a study of the railroads that once criss-crossed the region and connected the Hudson Valley to the rest of America. “I really like these lost histories,” says Carey.

Sweet Violets will be screened on February 12 at 1pm at Upstate Films in Rhinebeck, followed by a discussion with filmmaker Tobe Carey.