Even though they occurred almost half a century apart, Kathy Reisfeld's and Jo Elling's first encounters with a house in Great Barrington were remarkably similar. Both women found the listing and trekked across state lines to see the property. In both cases, fate would have each waiting for at least a day before a realtor could let them inside—thereby causing each to contemplate the property from up close, but still at a distance. Both encountered the home when it had stood empty for a spell, and as a result was in need of rehabilitation. And in both cases, despite its state of varying disrepair, Elling and Reisfeld almost immediately knew they would love the home.

Standing for nearly three centuries, the Colonial homestead—which includes a 3600-square-foot Cape-style main house, a traditional schoolhouse with a bell tower, a barn, and (presently) three acres of land overlooking the nearby preserved agricultural landscape—dates from 1742 and has retained many of its Colonial details. 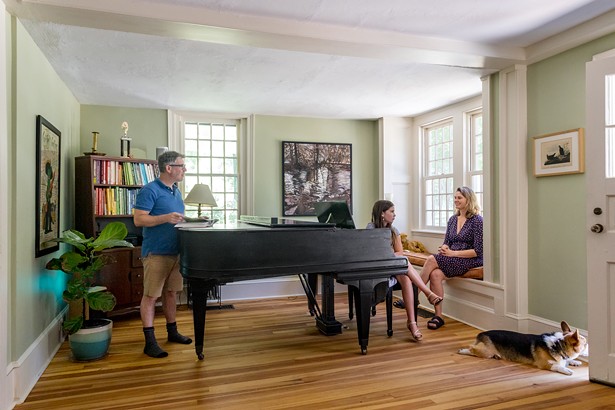 In 1971, when Jo Elling first found the house, on a drive up from Brooklyn with her husband Ray, it was completely overgrown and Western Massachusetts was sleepier than it is today. The local agent couldn't meet the Ellings until the next day. "So we sat on a little knoll nearby with bag lunches we brought from the city and looked at it from nearby," remembers Elling, who is now 97, and lives next door. "All I could see was Cary Grant coming out the front door. It was beautiful. I think I fell in love with it right away."

In 2019, Reisfeld came up from Woodstock with her mother and daughter in tow after finding the listing online. "The realtor couldn't show us the house for a few days, so we just walked around and looked through the windows," says Reisfeld. "It was a wreck at the time," she recalls. "But even though it was damaged, you could tell it had been such a lovely home and could be brought back." Reisfeld and her husband Scott decided to take on the challenge of restoring the historic property and soon after taking ownership the couple realized they had another strategic advantage in Elling, who shared her years of research into the property's history, her own memories, and the occasional advice. 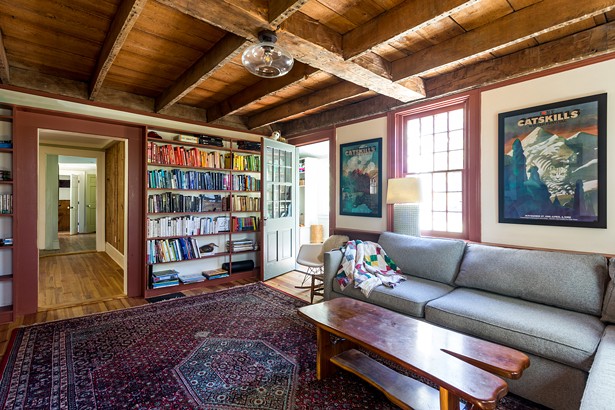 A Glimpse into Pre-Revolutionary Life

Built by Stephen King, the local weaver and wool merchant, the home originally included a land grant bestowed by the English government of 45 acres reaching from the main road into the town and encompassing the surrounding meadows and swampland. King was the son of David King, the first European-born settler in Great Barrington, then known as Upper Sheffield, an area that before that had been part of the Algonquin nation. 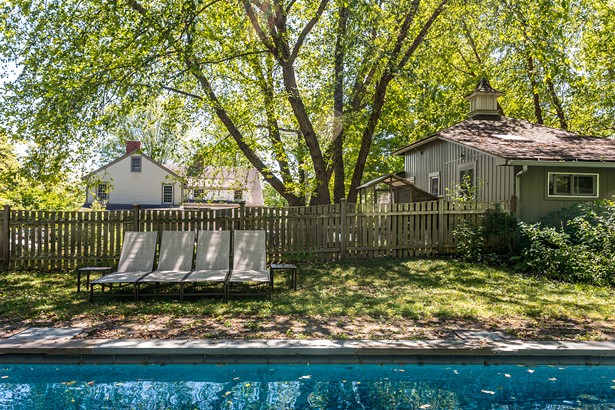 King also built the Green Mill, which was one of the region's first fulleries—a place where wool is processed into cloth. King also had a working farm on the home's 45 acres and built a one-room schoolhouse in the yard for his children.

King lived in the home as the town grew from settlement to farming community, serving on the town's first jury and watching the colony break into revolution around him and then become a fledgling nation. King died around 1785 and the home changed hands serval times over the ensuing centuries. Slowly, bits of the surrounding farmland were developed as the Gilded Age made Great Barrington a popular site for summer cottages. 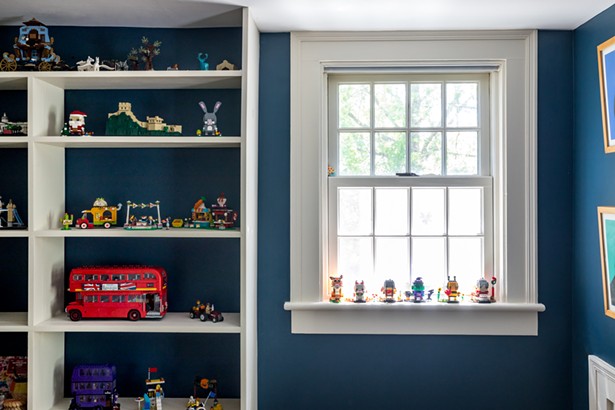 When Elling and her husband bought the home, it was a more manageable five acres. Although they had four boys to raise, they briefly considered breaking the rambling two-story, six-bedroom home into a two-family dwelling. "But we just couldn't do that to this house," explains Elling. Instead, the couple began hosting family and friends for long weekends. That went on for a year, until the couple realized they'd stumbled onto both a way to maintain their rambling household and a second career for themselves.


They opened a bed and breakfast, Ellings Guest House, welcoming guests both regional and international. While they swapped out a few of the home's original closets and replaced them with extra bathrooms (the home now has five and a half), the Ellings preserved the rest of the home's interior. Their bed and breakfast became a popular stop for visitors, evoking a feeling of a bygone era. The Ellings ran their guest house for 26 years, until they finally retired and built a smaller house on two of the property's acres. 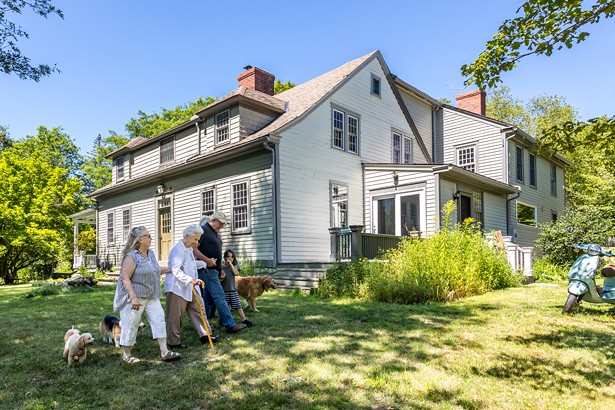 When the Reisfelds took on the challenge of the house, they had their work cut out for them. Sitting empty the prior winter, a pipe had burst and damaged two-thirds of the first floor, which had to be gutted. The couple hired Rhinebeck-based architect Inma Donaire to collaborate on the space's redesign and Ron Love of R.N. Construction to execute their plans. 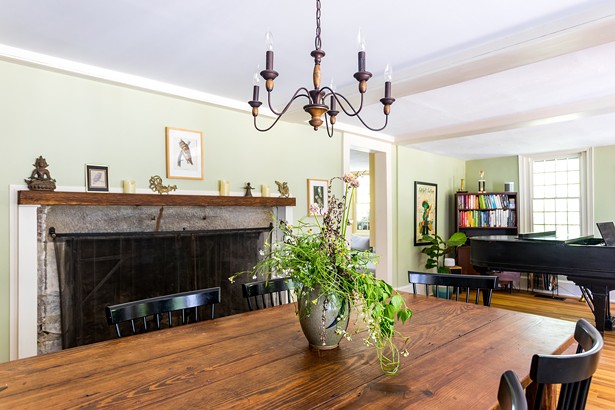 Central to the home's first floor, a giant fireplace faces three different rooms, including the living room, a sitting room, and a small parlor. The home's original rectangular living room—large enough for a baby grand piano at one end—was left untouched by the flood and features the home's original wood beams along the ceiling and the wide-plank "king's boards" along the walls—so called because they were culled from the widest, straightest trees and meant to be sent back to England to become the masts of navy ships.

The kitchen had been completely destroyed by water damage, so Reisfeld and Donaire used the opportunity to design an open, modern space that capitalizes on the view of the landscape. A central island of Cararra marble provides ample space for family meal preparation. Nearby Cararra marble counters form an L-shape along the kitchen walls interrupted by a farmhouse sink Reisfeld had been saving for years.

"Someone was selling it along the side of the road in Woodstock," she says. "But it wouldn't work in our first little house there so it sat in the basement for a decade before I could finally use it." Here it sits under one of the home's few modern flourishes—a rectangular picture window running the length of the room and offering a view to a nearby hill.

Adjacent to both the kitchen and living room, a smaller room with doors on both ends offers a view into Colonial life. The borning room was a place where laboring mothers and sick family members could remain close to the home's fireplace but still retain some privacy. The Reisfelds preserved the small room but added kitchen storage for extra pantry space.

Much of the home's upstairs was spared from water damage but the bathrooms throughout the home needed an update. Working with Donaire, the Reisfelds redesigned the primary bathroom as a haven with a view to the back yard. An oversized freestanding tub sits at one end with the window at eye-level for bathers. Donaire chose tiles for the space and came up with the idea of adding floating wood slabs to the walls and matching them with a rectangular sink.

Working with Ron Love and his team, the Reisfelds redesigned the former schoolhouse into a one bedroom cottage with loft, kitchen and wood stove as a full-time residence for her mother, the artist Sharon Stanfield. Stanfield utilizes the property's nearby barn as a studio. A shed stores hay for the family's two goats, Salt and Pepper. 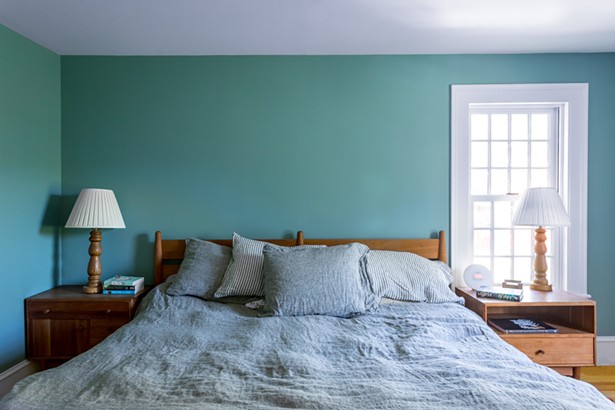 Down a mowed path, winding through gnarled crab apple trees, is the line between the Reisfelds' house and Elling's, inspired by the original house's design. The Reisfelds visit often, and Elling offers sage advice on taking care of the historic property. "It's a lot of work, but it all gets done," she says. "Then you should just sit down with a nice drink in your hand, and enjoy it all."