An Excerpt From Repair Revolution

How Repair Cafes & Its Fixers Are Transforming Our Throwaway Culture

By John Wackman and Elizabeth Knight 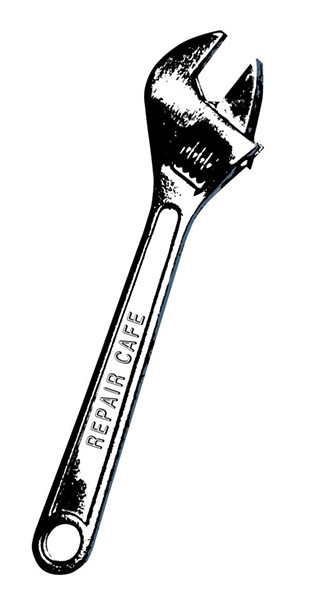 Used to be, every town had its repair shops. Everyone knew where to go when they needed something fixed. That know-how was often close at hand, practiced by parents, grandparents, aunts, uncles, neighbors, or a local "fix-it man." We can call this a remnant of the Great Depression, of course, but its roots stretch back to Benjamin Franklin's Poor Richard and the tradition of Yankee thrift.

How has our society changed? The immediate answer, almost always, is that we no longer get things repaired because ours has become a throwaway culture. The economic explanation for this is that since World War II, the world has embraced the materials economy, that is to say, a wasteful, rather than regenerative, use of precious resources. As the axiom coined by Twitter cofounder Evan Williams puts it, "convenience decides everything." The argument can't be made that this is sustainable.

But if there is a Repair Cafe or Fixit Clinic or Tool Library in your town, you have a different answer. The place to get something fixed is at the library or a church or your town hall or community center. The concept couldn't be simpler: Whatever you call it, wherever it is held, a community repair event invites you to bring a beloved but broken item to be repaired for free, by an expert who is also your neighbor.

There's one catch. This is not a drop-off service. You bring your item and stay with it during the repair process. You sit down and describe what it's not doing that it's supposed to be doing, when it stopped working, and where you think the defect might be. This is not a monetary transaction—it's an interpersonal transaction.

The consumer economy is powerful. The growing repair culture is a countervailing force: community initiatives that are creative, socially vibrant platforms for building awareness about the larger challenges facing our planet.

There is something about the act of repairing that motivates and satisfies deeply felt parts of our nature. We can trace this insight back to Aristotle: one of the greatest sources of human enjoyment is being able to enact one's knowledge, to share what you know. The act of repairing involves "troubleshooting," which to many people is an irresistible proposition. 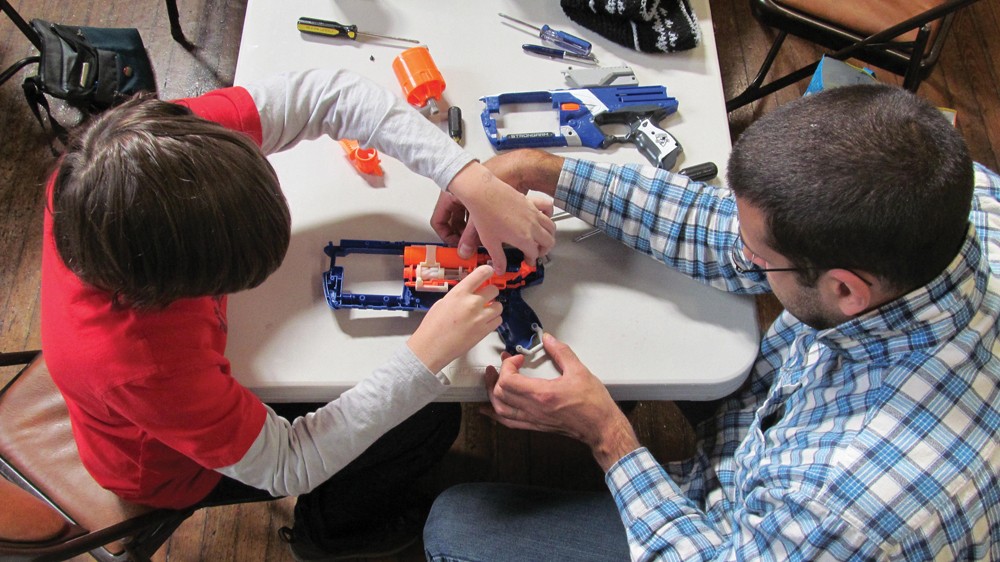 Repairing in Community Is Powerful

Repair culture is about these things: Extending the life of stuff that you care about or rely on. Feeding your curiosity about the way things work. Using tools and using your hands. Honoring, preserving, and passing on repair know-how. Sitting elbow-to-elbow at a worktable with your neighbor. Sharing skills. Reducing waste. Making friends. 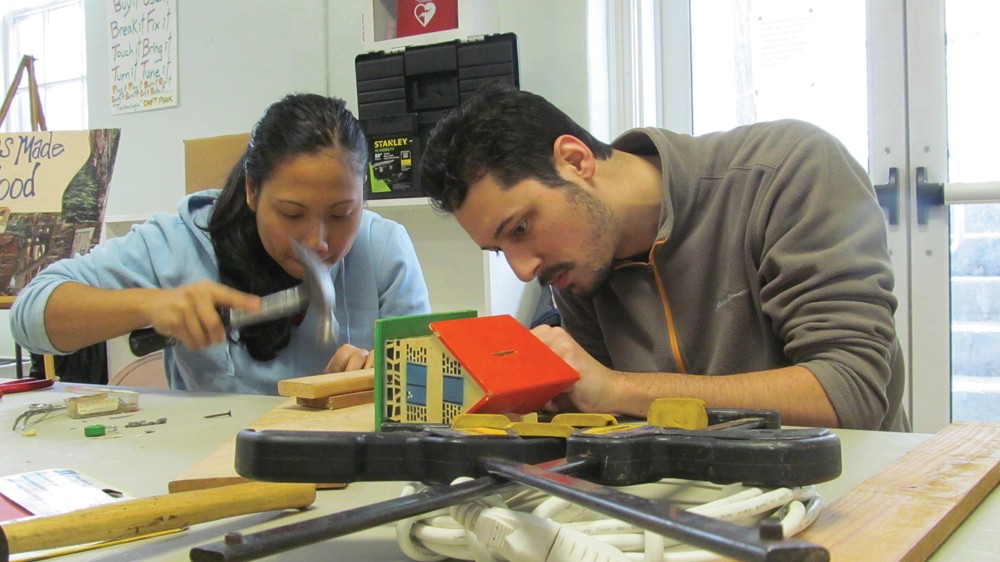 "Repair Cafe is like a cross between 'Antiques Roadshow' and the Island of Broken Toys. I'm grateful to be a part of it because it touches a lot of lives. That's why I do it.

You might think that the most common comment people offer about their experience at a repair event is something like "I'm so glad they fixed it" or "It was free." But the words people use more than any other, hands down, to describe their Repair Cafe experience are "It was fun."

Almost every item people bring has meaning to them. Every item comes with a story. Laughter and tears are common. Some of the comments our customers leave are straightforward description: "Pants mended." "Clock fixed." "Toddler bike now roadworthy." "$200 printer back in service after the company said, 'Buy a new one.'" Others are more effusive: "I can't begin to tell you what an absolutely lovely and wonderful experience this has been." "There is a strong beam of hope and light coming from this space."

Every repair event is locally organized. Partners include libraries, congregations, town boards, environmental and conservation groups, Rotary Clubs, climate activists, and at least one County Emergency Communications Association. Librarians say they love repair events because they offer hands-on, intergenerational learning. Faith communities embrace the theological aspect: This is caring for creation. County waste management or resource recovery agencies recognize the value of any grassroots initiative that will help slow down the pace of waste reaching their landfills. Clubs from technical colleges and school districts bring their team spirit, and high school and college students commonly volunteer to get community service credit. Not surprisingly, the kids often end up behind the digital worktable—or with their hands on a sewing machine, some for the first time.

"Repair Cafe is organized around the ethos of skill sharing. That's a mutually beneficial thing. It creates opportunities to nurture neighborly networks. It calls on the invaluable wealth of community knowledge and know-how."

When journalist Harry Smith brought the "NBC Nightly News" crew to our Repair Cafe in New Paltz, New York, he beautifully interpreted what he found: "The idea is exquisitely simple: neighbor helping neighbor. They fix a lot of stuff. Things left in attics and garages. Things that just stopped working. And what we marveled at was the care, the meticulous, painstaking care that goes into every repair."

"The community energy is just so strong when people get together to keep a family heirloom going for another 50 years—or to fix the vacuum that keeps the floor clean."

The Fix Is In

As of this writing, there are more than 150 Repair Cafes in the United States. The largest concentration is in the Northeast, with 50 or so in eastern New York and northern New Jersey and another 50 in Massachusetts and the other New England states. The upper Midwest and the West Coast are the next most "repairing" regions. Sprinkled around the country, you will find regular events in Colorado, Ohio, and the DC and Philly areas, plus outposts in Fairbanks, Alaska; Honolulu, Hawaii; Lincoln, Nebraska; Ellensburg, Washington; Moscow, Idaho; Houston, Texas; the Research Triangle of North Carolina; and St. Petersburg, Florida—with wide open spaces in between.


In one relatively small region—the Hudson Valley, Catskills, and Capital District of New York State—we saw more than 120 events in 2019, in 40 communities in 12 counties. These events involved the time of more than 600 volunteers who brought everything from advanced electronics skills to the wherewithal to make a mean cup of tea. The very social "cafe" side of each event thrives on home-baked treats, fruit, coffee, and tea.

"I like the idea of keeping useful things useful—and out of landfills. It seems there are lots of people who love ugly lamps!"

Fixing is not an all-or-nothing endeavor. We like to say that there are three possible outcomes for the item you bring. "Repaired" means the problem was figured out and fixed, and you may have participated in the repair. At the other end of the spectrum is the "Beyond Repair" outcome, where the item isn't fixable for any of a number of reasons. The pronouncement "Tried, Dead, and Done" frees you to recycle or responsibly dispose of a useless thing, with the satisfaction that you followed its useful life to its end. Or you may carry it over to the Kids Take It Apart Table, our popular "learning lab," where it will end its life in pieces. Finally, there's the third, in-between possibility, "Half Repaired"—which is also valuable. Your item wasn't fixed, but your coach identified the issue and suggested possible solutions and a next step. If a replacement part is needed, you might order it from the local hardware store and bring it along to the next Repair Cafe. Or you may now know enough to fix it yourself. The common denominator in all three scenarios is this: You learned something about the way things work. You may have even gained a new appreciation for the stuff in your life.

"I love marrying the philosophy of creating community with the practicality of fixing things."

In conversations with Martine, we've talked a lot about the impact of Repair Cafes, and we believe the data don't capture the movement's true significance. That significance is the signal the events generate (to use Martine's appropriate metaphor), the signal received by people who walk into a Repair Cafe for the first time in their town. That signal says, We are better off when we see our own community in the midst of cooperation, creativity, and downright decency, in a place where goals are achieved and positive outcomes are realized.

"The value of the Repair Cafe," says William McDonough, an architect and coauthor of the influential book Cradle to Cradle, "is that people are going back into a relationship with the material things around them." Evelien H. Tonkens, a sociology professor at the University of Amsterdam, agrees. "It's very much a sign of the times," says Dr. Tonkens, who notes that the Repair Cafe's "anticonsumerist, antimarket, do-it-ourselves ethos" reflects a more general trend to improve the world through grassroots social activism.

And here we can underscore one more attribute about community repair projects: They do not self-select for any political point of view. Everyone has broken stuff, and this speaks to egalitarianism. Sitting down with a neighbor to troubleshoot what's wrong with your stuff helps bridge the partisan divide—or any other divide—that may separate you in another setting.

Repair culture is a tail wagging the dog. It is an active, participatory volunteer gig that animates the larger imperative of sustainability and community.