Down Route 9 from Rhinebeck, Heritage Food and Drink is set back among rows of little plazas in Wappingers Falls. Heritage, which opened in August, is sited at the former location of Greenbaum and Gilhooley's, which served traditional American fare for half a century before closing a few years ago. Now, regulars of the old family restaurant would hardly recognize the joint. Not only did owner Jesse Camac ditch Greenbaum and Gilhooley's green-and-white exterior for a more contemporary look, but the interior has been completely transformed; stuck-in-time wallpaper and shellacked tables have been replaced by striking modern farmhouse elements. "We liked that the building required a lot of work. That gave us the ability to rebuild it exactly the way we wanted," Camac says.

The space balances elegance and edginess with just enough comfort. The bright, airy front room—with its bistro seating flanked by a large, windowed wall and a long, stocked bar—contrasts with the warmer back room's upscale-steampunk vibe. Industrial cage-light sconces and brassy bowl lamps hanging from metal pulleys illuminate dark wooden tables accented with brass brads. Matte black leather booths are chic, soft, and welcoming; some face the glass-walled kitchen—all the show, without the noise. "We basically had to rebuild the entire building and start from scratch, in order to get the results we were looking for," Camac explains. "The project took close to a year to complete and we are very proud of the end result—especially given that we did a design-and-build, which essentially meant that we were making decisions as progress was made." 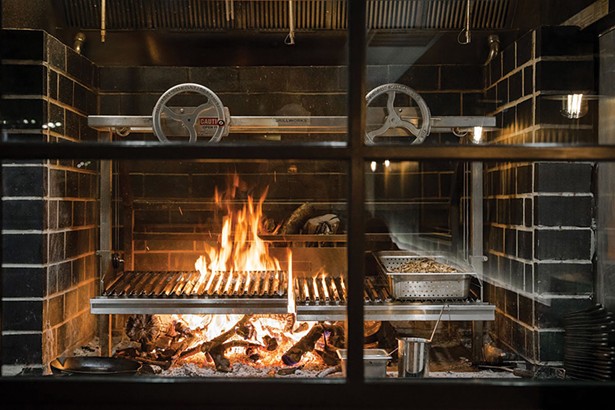 "We try and source as much as possible from New York, specifically the Hudson Valley," Camac says. "We have an apple orchard in Milton, so you will notice that there are apples in many of our dishes."

Read about the other new and newly renovated restaurants we profiled in January 2018: The Amsterdam and Silvia.