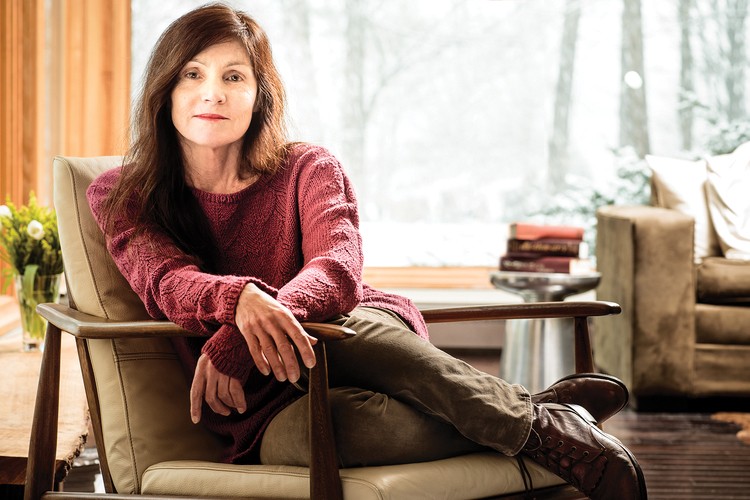 Singing around a campfire
you might miss happiness,
squished between envy
and sorrow. Or find it
beside you, matter-of-factly,
watching a red-tailed hawk
catch pigeons and rats,
a retriever fetching sticks
racing back and forth
from your shared park bench.
But if whistled at, happiness
bonds: with you on tiptoe
lifting curtain rods to hang
drapes, or flat-backed
positioning drip pans to change
oil, tasks completed then together
together to clink steins,
toasting sand dunes and starlight.

For the January 1999 issue of Chronogram, Pauline Uchmanowicz wrote a profile of Dawn Walker, aka the Flower Lady, a noted local floral designer. In the process of reporting the piece, Pauline accompanied Walker on a pre-dawn visit to Manhattan. After six hours running around to various markets in the Flower District, and driving back and forth to New York City, Pauline decided that she would volunteer to assist Walker the day of the wedding:

"Around 5:30 pm, somewhere along Rt. 32, I promised Dawn I'd assist her the day of the wedding. When we got to my place, the Flower Lady came in, and, convincing me to take some lisianthus, completed her first design of the weekend, an elegant arrangement in a green porcelain vase."

In the course of the piece, Pauline included quotes from writers and texts as various as Katherine Mansfield, Samuel Delany, Dr. Andrew Weil, and the Dictionary of Occupational Titles. (Did Pauline actually own a copy of the Dictionary of Occupational Titles? Why?) This was the first piece she wrote for the magazine. Pauline's taut, literate, Joan Didion-meets-girl-next-door prose was the voice I had been searching for in our fledgling magazine without knowing it. Pauline's pieces became the ones I directed new writers to reference when asked about our house "style."

Pauline was just getting started. Over the next decade, Pauline was a frequent contributor, writing close to a hundred articles for Chronogram. She wrote about recycling initiatives and puppetry collectives, modern dance and psychiatric history. She cooked with chefs like Corinne Trang. She taught civics lessons in her long pieces on her beloved Rosendale, charming portraits of its eccentric inhabitants and municipal foibles. She profiled writers like Nick Flynn, Tobias Wolf, and Gail Godwin. She wrote dozens of book reviews. She hiked up Indian Head mountain (elevation 3,373 feet) with the Adirondack Mountain Club. She planted crops with a 95-year-old Clintondale farmer. She broke bread with the Mid-Hudson Vegetarian Society. I assigned Pauline a piece on dog adoption and she wound up arranging an animal-themed poetry reading to benefit the SPCA.

Pauline was so unusually kind, so unremittingly generous, I often wondered if she was trying to right the karmic balance for some dastardly deed in her past. But that was just who Pauline was—she was as empathetic in her writing as she was in person. To be profiled by her was to be seen, grokked, as her grateful subjects often told me after reading her pieces about them. She brought the verbal precision and emotional range of the poet to general interest reporting.

In addition to moonlighting for the magazine, Pauline was an English professor at SUNY New Paltz and an accomplished scholar and poet. (As her poem, "Happiness Studies," reprinted here, attests.) She was also a conduit for a stream of students and recent grads in whom she saw potential. The writers who came to Chronogram via Pauline have contributed hundreds of pieces to the magazine—and continue to do so. She was an ardent champion of promising talent and loved to nurture it. If Pauline read this, should would probably email me: "Brian, what you wrote about me was so touching. Are you writing? Are you writing enough? I'm expecting great things from you."