"Farm to table” is a phrase that gets a lot of use these days. An increasing number of restaurants use seasonal, local ingredients, and it’s a trend that augurs well for consumers and the environment alike. But, as with any trend, the slogan can become overused and diluted through aggressive marketing by bandwagon-jumpers. There are some good options for locally oriented restaurant eating in our region, but to see what the farm-to-table ethos looks like fully realized, one should visit the Red Devon restaurant and market in Bangall. From the eco-conscious physical plant to the rigorously local sourcing of nearly every ingredient, this is an institution that walks the sustainability walk.

Julia and Nigel Widdowson opened the restaurant a couple of years ago, following a complete renovation. Formerly the Stage Stop—once owned by James Cagney—the building was reborn as a state-of-the-art green facility with geothermal heat pumps, solar electric and hot water systems, recycled construction materials, and a variable volume exhaust fan in the kitchen that draws only as much air as needed. The many changes also include a green roof on an addition, a reduction of impervious paved surfaces outside to improve water absorption, and indigenous plantings. There’s a detailed seven-page pamphlet by the architects describing all of the green features of the building available inside the entry.

Julia, originally from Texas, grew up with a conservationist and part-time rancher father who instilled within her a love of both subjects. After their children were grown, she says, she and Nigel bought Temple Farm in Millbrook and moved up from New York City full-time, starting off with nine Devon cows. Over the course of eight years, the herd has grown to 30, including two bulls. The cattle are grazed rotationally, moving to fresh pasture every day or two, ensuring healthy fields and happy cows. Devon cattle get particularly fat on an all-grass diet, making them ideal livestock for a restaurant owner. The farm supplies the restaurant with beef and eggs, and some vegetables. Many crops—grain, vegetables, and fruit—are grown nearby by farmers who contract to produce specific quantities. Other ingredients are bought from as nearby as possible, and must be sustainably and organically grown.

Despite the wide range of energy-saving technologies and methods deployed throughout, the building is understated and does not call undue attention to itself. The exterior was preserved, as were many other components, including the historic bar, to reduce new material consumption. The interior is pleasant, well lit, and relatively unadorned. The staff is friendly, attentive, and knowledgeable about everything from sources for ingredients to the history of the Stage Stop, and service is smooth.

Chef Sara Lukasiewicz is a recent graduate of the Culinary Institute in Hyde Park. As sous-chef at the Devon, she was in charge of charcuterie, and since her promotion last year to executive chef, she has been deepening her knowledge of the subject, hanging hams and broadening her range of pâtés, sausages, and salami. Originally from the Midwest, she’s delighted to have landed here: “The Hudson Valley is an amazing place to be for a culinary person; the ingredients are just phenomenal,” Lukasiewicz says, but she notes that winter provides a challenge to an all-local menu. In response, Lukasiewicz has been working with the local growers who provide vegetables, increasing her orders and focusing on canning, freezing, and root-cellaring enough to last until the growing season begins again. Future plans include a greenhouse to grow citrus trees and provide salad greens all winter, as well as planting a garden next to the parking lot and herbs and flowers all around.

The menu changes weekly, as new ingredients come into season. It’s not showy food, but it is very well crafted; like the building, it’s understated and unimpeachably put together. A recent menu featured early spring comfort food: braised meats, bouillabaisse, mushroom and leek ravioli. A braised pork cheek on house-made tagliatelle offered rich, shreddy meat on sturdy noodles that might have benefited from a higher ratio of yolk to white for a silkier bite. Beef short ribs with ramp-smashed potatoes—ramps, foraged by the chef, appeared in many places on the menu—were beautifully balanced between the flavors of the tender meat and the unctuous red wine-based cooking liquid. Desserts included sorbets made from local rhubarb and currants frozen last summer and a masterful carrot cake made almost entirely from local ingredients, including cream cheese from Ronnybrook dairy, which was at once fluffy and moist, with exactly the right amount of frosting to maintain an ideal equilibrium of taste and texture.

The wine list is well rounded and reasonably priced, and includes some local wines. Lukasiewicz speaks enthusiastically about her desire to learn more about New York wines, especially those from the Finger Lakes and Long Island, and she conducts weekly tastings to find new selections from near and far. All nonlocal wines on the list are either certified organic, practicing organic, or biodynamic. The bar also stocks local microbrews, vodka, applejack, and whiskey, as well as liqueurs and cordials. The menu lists a range of classic cocktails reinterpreted using local booze.

In addition to the restaurant, the Red Devon is also a market that carries a variety of prepared foods and baked goods from the kitchen, as well as local products like honey, jam, vinegar, and maple syrup. The coffee is organic and fair-trade, which is a standard they apply to all of the ingredients, like chocolate and olive oil, that simply cannot be locally produced. (Though the olive oil comes from an Italian farm owned by a neighbor). Widdowson says “our biggest hurdle is to make the Devon profitable. Sustainable is an economic as well as an environmental concept!” As a result, she plans to expand the catering and market parts of the business, hoping that a recovering economy will do the rest.

And that brings us to the point at which this diverges from just another restaurant profile. The Red Devon represents a point at which the idealism of the local food movement bumps directly into the realities of the contemporary food business, and as such, is an instructive example of the challenges present in going against the industrial model that dominates the market. Widdowson describes the decision to be avowedly local as an act of will, born of a strong desire to reinvent the commercial food system literally from the ground up. It will take a great deal of work, and will be driven at first by people who have the means to pay more for ethically produced food, as well as by improved agricultural legislation and better education about nutrition. In her own words: “The corporate farm and food distribution system in the US is predicated on cheap food. Needless to say, the real (exorbitant) costs—to the climate and to our communities—are hidden. But people are looking behind the curtain now and asking more and more questions about their food. What they’re seeing isn’t pretty, and I think they’re ready to change their habits and change the whole system. The more the system changes, the more we buy direct from the farm—taking out all the fuel costs, all the silly packaging costs—the more food will cost what it should cost, with the profits going to the people who grow and raise it.”

With any luck, a few years from now we’ll be in a very different world. All farmers markets will take food stamps (the Kingston Farmers Market does, thanks to Queens Galley), the enormous subsidies for health and ecology-damaging mega-agriculture will be cut, and communities will achieve sustainable self-sufficiency with many foods. The quickest way to get to that future, whether cooking at home or going out, is to put our money where our mouths are. 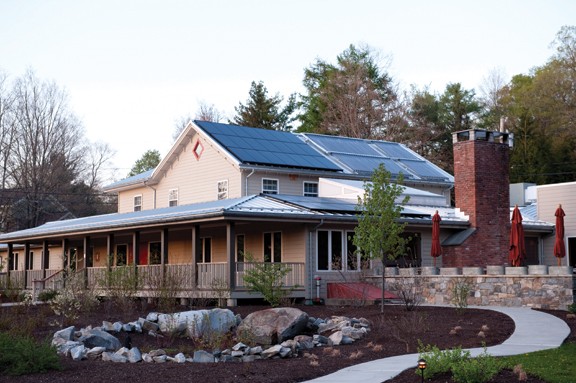 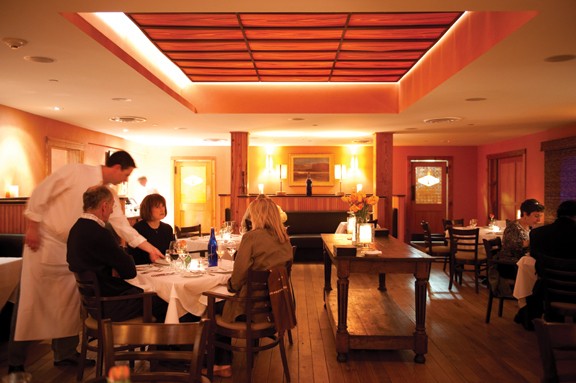