[EDITOR'S NOTE: CATCH 38 IS PERMANENTLY CLOSED. LUCKY DRAGON HAS OPENED IN ITS PLACE]

Farm-to-Table Chinese Food at Lucky Dragon Restaurant in Rhinebeck
Lucky Dragon, which had its grand opening last night, Thursday, April 11, is a celebration of classic Chinese restaurant fare and of the Hudson Valley’s bounty. Like Cinnamon before it, this “farm-to-chopsticks” restaurant in Rhinebeck broadens the scope of farm-to-table into ethnic cuisine.
By Marie Doyon
Restaurants
For a restaurant to rebrand itself involves recrafting everything that it brings to the table—much more than the food. Cocktails, décor, service, uniforms, and the vibe all need reworking to make a transformation convincing.

The owners of The Local at 38 West Market Street in Rhinebeck weighed whether to take that step or close after a downturn in sales. “Last year was pretty rough,” says Wesley Dier, co-owner and chef with wife Bryn Bahnatka-Dier.

They had worked hard and well together since they opened eight years ago, dividing duties as successful family businesses do. Bahnatka-Dier was the cheerful front-of-the-house greeter, who also might deliver an order, clear dishes, or stop by to inquire how everything was. Dier, a 1992 CIA grad, was rarely seen, keeping his nose to the grindstone in the narrow, partly open kitchen.

Their restaurant was known for its eclectic new American cuisine with a global influence, particularly its signature duck-two-ways and sweet potato ravioli. People also came for the charm—a quaint two-story, 1850s house with front porches and wooden bar.

But after a bad year and the tide of restaurants like Crave in Poughkeepsie and New World Home Cooking in Saugerties closing, the couple considered selling and moving to Charleston, South Carolina, where they spent their winter break. “We sat in our hotel’s bar and contemplated life’s ups and downs, and the good and bad of owning a restaurant where we grew up versus transplanting ourselves to a new place,” says Bahnatka-Dier, 45, who was born in Rhinebeck and met Dier, 46, in junior high school when his family relocated to the area.

After a three-inch snowstorm shut down Charleston airport at the end of their visit, they had an epiphany and planned a new concept for their Rhinebeck location. They returned reinvigorated. “We recognized we might be too old to move to another state and reinvent ourselves, not just our restaurant,” she says.

They also recognized other advantages. Bahnatka-Dier’s family owned the building, and Dier had opened restaurants before. “I’ve been at the forefront of the Rhinebeck food movement for 19 years and know the importance of staying relevant with the times. I actually enjoy the process,” he says.

Hooking a Big One

This past May 31, they debuted their contemporary inland fish shack, Catch 38, with the sign designed by a friend and nautical signal flags in front spelling out the name. “We knew there was a need since it didn’t exist, and there were too many places doing farm-to-table this or that, which we had done already,” Dier says. Because of area purveyors like Gadaleto’s out of New Paltz and Hudson Valley Seafood in Central Valley, securing daily deliveries was easy.

New cocktails pair well with the surf-heavy menu, such as the blood orange champagne aperitif. And though the order of the day is seafood, red meat and poultry eaters, aren’t left adrift. There is a roasted chicken option, a five-week aged steak, as well as a burger.

The menu, décor, and pricing all play up the rebranding. “We wanted to lighten up what we were doing and make all more approachable. We didn’t just want to be a Saturday night date place but somewhere you’d go in the middle of the week for a 6pm rosé slushy [$9] or come to in a blizzard and look happily at a big picture of Harbour Island,” Bahnatka-Dier says. 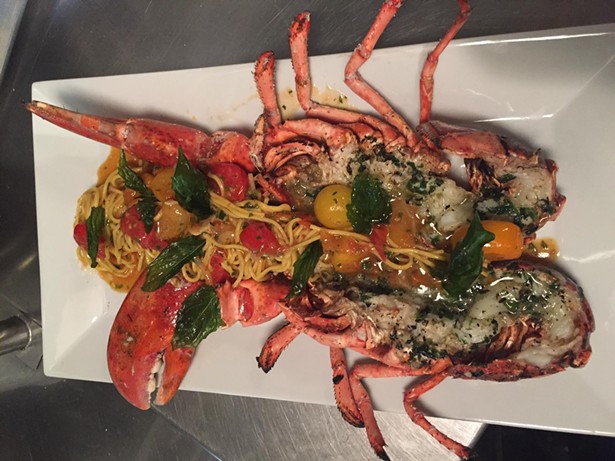 The menu offers favorites with a twist, from cedar salmon salad nicoise ($18) to grilled lobster tail with sunshine fettuccine ($34). They contracted with Patricia Wind whose Farms2Tables app lets clients view what’s available daily on their smart device. “I tap and see what looks good. Today, I ordered milk from Ronnybrook, buttermilk from Hawthorne Valley, and arugula from Sky Blue Farm,” Dier says.

Unlike more and more restaurants that have eliminated dessert except for store-bought ice cream or sundaes to avoid hiring a pastry chef or purchasing from outside bakers, Dier and his staff churn ice cream and sorbet in-house and prepare sweets like key lime muffins with “zesty” cream cheese ($9). They switched out the amuse-bouche hors d’oeuvres that they felt made the restaurant seem fancy for more playful house-made malt-vinegar potato chips. Garlic bread with kale pesto and burrata is one of the appetizer ($8). “Bread seems obligatory, but it’s expensive to serve,” says Dier, who wanted to lower the average check.

To give a full-blown nautical experience yet not steer too close to kitsch, they re-envisioned décor with ship-style teak boards on the porches, white painted and stripped cottage-style interior floors, fish-motif wallpaper in the bathroom, and nautical artwork—but not too much. Instead of the former uniform of black shirts and jeans, wait staff wears white T-shirts with their logo in blue on the front and word “monger” on the back.

And though there’s no water view, the rebranding temporarily transports diners to the shore.