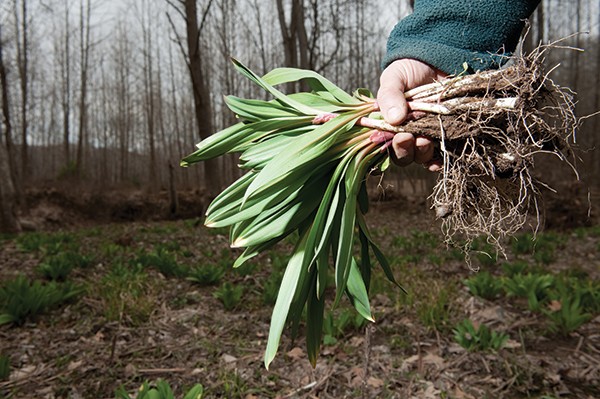 15,000 years ago humans existed solely on the food they hunted and gathered. Now the average American may never eat a foraged fruit or vegetable. But does this primitive instinct from our ancestors, to find our own food in the landscape rather than aisle 9 at ShopRite, lie dormant just waiting to be revived? The primordial practice of foraging food has, ironically, become a sophisticated trend.

Primitive and trendy both describe the foraging of ramps—one of spring's first vegetables in North America. This veggie's distinction is that it's not only local and seasonal—it's wild, too. Ramps are the namesake of Chicago ("shikaakwa" was the name given to ramps by native tribes), and have a funky flavor that is reminiscent of both onion and garlic.

The ramp is widely celebrated in the Northeast during April and May. "It's become a boom," says Chef Jeff Gimmel of Swoon Kitchenbar in Hudson, who founded Hudson's Ramp Fest. For its third year, the event will feature the ramp-based culinary creations of 21 chefs from restaurants in the Hudson Valley and New York City at Basilica Hudson on May 4. "Like all good ideas, it came about while drinking wine with friends," says Gimmel on his notion to begin Ramp Fest. The event more than doubled in its second year and about 500 people attended. This year Ramp Fest should have its greatest outcome yet.

Most of the participating chefs forage for ramps on their own, or coworkers trek into the wilderness for them. The plants live in the woods alongside streams and creeks, but don't expect a forager to show you where to find them. "Foraging is historically known to be very secretive," says Gimmel, who walks about 10 minutes through hilly terrain to reach his foraging destination and would rather not share where that location is. The plants have broad, smooth, light green leaves and generally grow in patches that you'll begin to find in mid-April. Their short-lived season ends in just six weeks or so.

Participating chefs are given instructions on how to find the vegetable and remove it from the ground properly. The ramp will not grow back if you rip the bulb out of the ground, which can be a problem, as amateurs are not aware of the proper removal technique.

Between the ground and the plate, chefs get creative with the ramp. One of the most fun dishes served at last year's Ramp Fest was prepared by Zak Pelaccio, whose new restaurant, Fish & Game, is set to open in Hudson this month. The dish paired ramps with roast lamb, as well as a shot of Four Roses bourbon and a follow-up shot of ramp pickle juice. "It loosened everybody right up," says Gimmel.

Whether it's the primitive experience of foraging or just plain fun, Ramp Fest doesn't appear to be going anywhere. Or maybe it's just the changing of the seasons. "We've been cooking with root vegetables and braised meat all winter. It's time for asparagus, strawberries, rhubarb, and ramps," says participating Chef Jamie Parry of Another Fork in the Road in Milan.

Ramp Fest will be held on Saturday, May 4, from 12-4pm at Basilica Hudson, a renovated 19th-century factory.

Wild For The Holidays: A New Foraging Mini-Series from Master Herbalist Dina Falconi